FANG Stocks Update: Actually, Netflix Has Some Room to Run 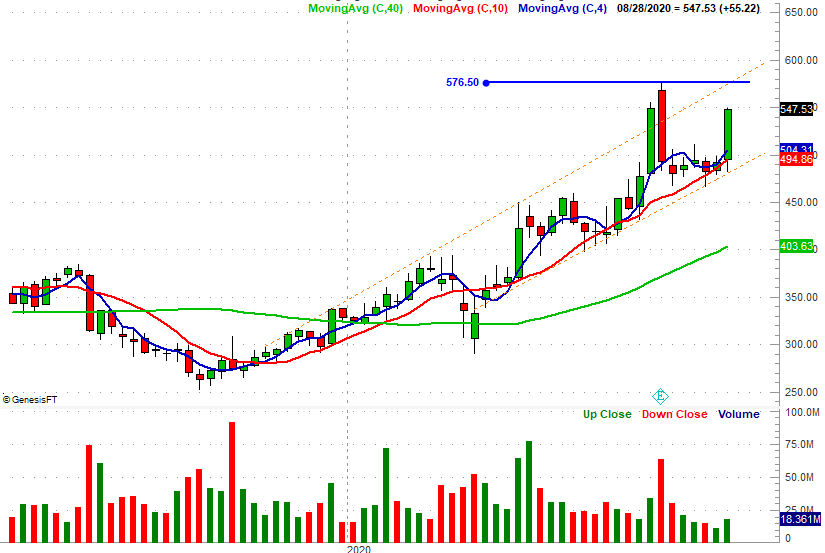 It's a move that most traders would be hesitant to follow. FANG stock Netflix (NFLX) bolted nearly 12% higher on Wednesday following news that new subscribers would likely stay on board even after the pandemic subsides.  All too often though, such moves are followed by a reversal. This just isn't an environment where trends last long. The more volatile the move, the more likely the pendulum swings the other way.

In this particular case though, Netflix may actually have some room to run... at least after the dust settles.

Two charts point to this possibility. The first one is a simple daily chart. As is made clear, NFLX found support at a technical support line (orange, dashed) that connects all the key lows since late March. The last time it was touched was the brief encounter earlier this month. At the same time though, the 20-day (blue) and 50-day (red) moving averages have also served as floors a few times in recent months. This launch is well-founded. 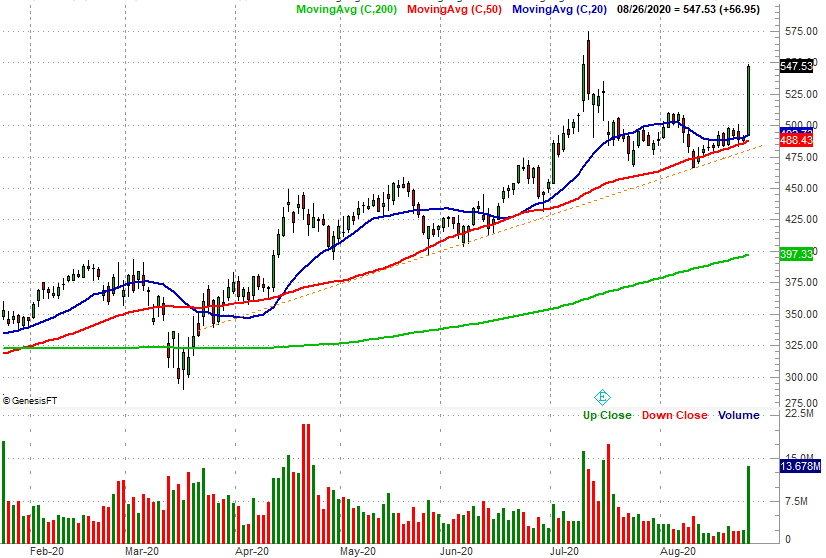 It's not the ideal move. Netflix is capable of continuing on after big moves, but the 11.7% gain is unusually large for this name. At the very least, it might be wise to let the bulls regroup here. Waiting for the 20-day and/or 50-day moving average line to "catch up" might take too long. Or, maybe not, if a sharp pullback takes shape from here. Either way, just keep in mind there's actually a lot of technical support in play here. The trick may simply be picking the right entry spot.

The second chart that suggests there may be more upside ahead is a comparison of Netflix's performance to the performance of all the other FANG stocks. Despite the impressive gain, NFLX is actually the weakest link among these names since the March low. There's room grow, particularly if traders decide to rotate out of the names that have logged bigger gains of late, and into the laggards. To that end, Alphabet (GOOG, GOOGL) may also be able to make good on its budding breakout effort. 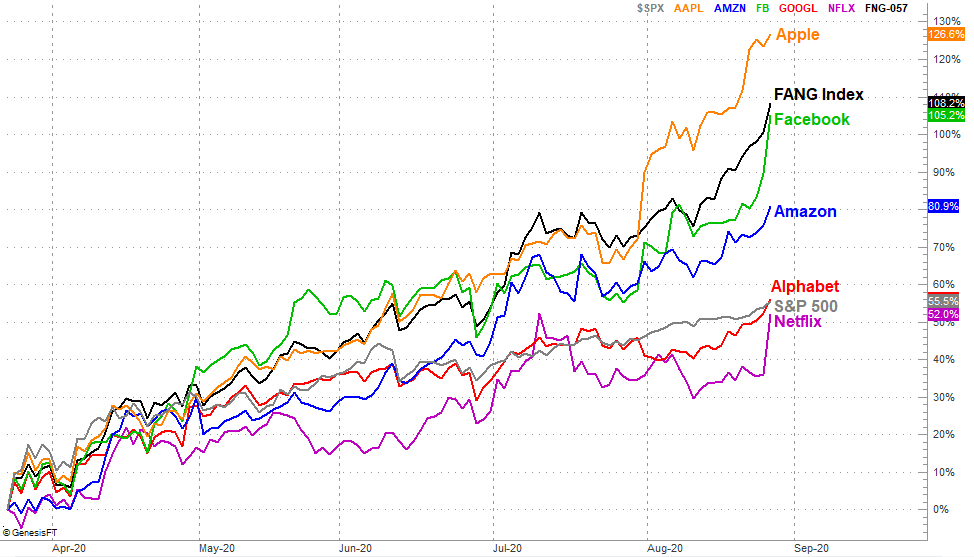 That being said, zooming out to the weekly chart of Netflix shows us where the bears may mount their first and best resistance should this rally effort go somewhere. July's high near $576.50 (blue) is a natural ceiling, but that's also where the upper boundary of a rising channel currently lies (orange, dashed). One way or another, that's a standoff waiting to happen. One can count on Netflix blasting past it - particularly given the time of year. But, should this stock push past that technical resistance, there's not much else to hold it back.

Just bear in mind a strong move past $576.50 would be very uncharacteristic of Netflix shares. That move would have to be well supported by headlines and fundamental progress to do something so unusual.

If you'd like to take advantage of each FANG stock's nuances with the power of options, we've got a solution for you. Our FANG Options Advisory is built from the ground up to capitalize on the powerful movements of the market's most-watched and most-active stocks. Go here to learn more.