This Renewed Rally is (Still) Anything But Balanced 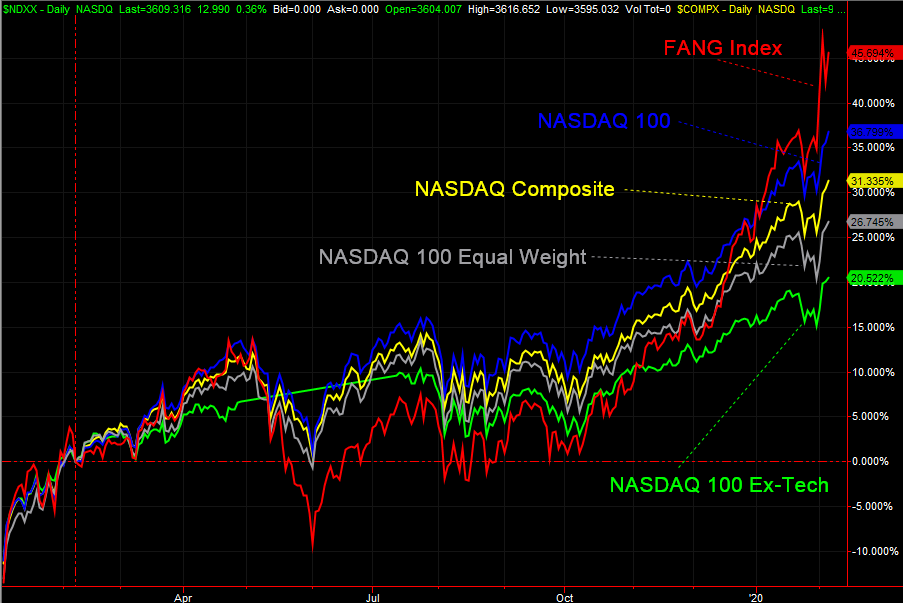 There's no denying the market rebound that took shape last week has been fun, carrying lots of portfolio values to new highs. Just know, however, that only a small number of stocks are doing most of the heavy lifting. Indeed, if it weren't for the FANG stocks, investors might not be celebrating at all.

The graphic below tells the tale, laying out the percent gains of several different indexes for the past twelve months. The FANG Index - collectively Alphabet, Netflix, Amazon, Apple and Facebook, collectively - is up a whopping 46% for that timeframe. But, backing out to a more balanced (though only slightly more, and the NASDAQ 100 is cap-weighted and heavily influenced by FANG stocks), the NASDAQ 100 performance is pared back to a less impressive gain of 37%. Taking another step back and looking at the entire NASDAQ Composite to include small caps and mid caps, the performance pulls back to an even more modest 31%.

It's not the only way to see just how imbalanced this rally has been. The NASDAQ 100 Equal Weight Index is specifically designed to squeeze out the misleading influence of the market's very biggest names (which happen to be the FANG stocks), and doing that brings the twelve-month performance to only 27%. Given just how well only a handful of names have done, this suggests that many if not most of the names in the NASDAQ 100 have significantly underperformed the average.

In a similar though not identical vein, when stripping out the technology stocks that make up the NASDAQ 100, the index has only gained 20% since early February of last year. Again, know that most of the FANG stocks are classified as technology names (though some of them are also considered consumer services names).

Then there's the unquantifiable influence of large tech names...if they're rising, traders may feel more compelled to buy any stocks, contributing to the rising tide that's lifted almost all stocks since early February of last year.

It matters, even if it's difficult to see how. A healthy rally should be inclusive, with all slivers and segments of the market contributing more or less equally. When one group alone has to be the driving force, that one group gets tired very quickly. That leaves it extremely vulnerable to an equally big pullback.

The various looks at all of the tech-heavy NASDAQ's indices and the NASDAQ-heavy FANG index isn't the only evidence we have that this rally over the past twelve months is incredibly unbalanced, however. When we compare the key sectors without respect to a NASDAQ or NYSE listing to one another we find the some disparity. The S&P 500 Technology Sector Index is up 47% since early February of 2019, versus the S&P 500's gain of only 22%. The next-nearest winner is the S&P 500 Utility Sector Index, but it's still up a very modest 26% for the twelve-month stretch. (And, it's not as if strong buying interest in safe utility stocks says traders are thinking aggressively.) 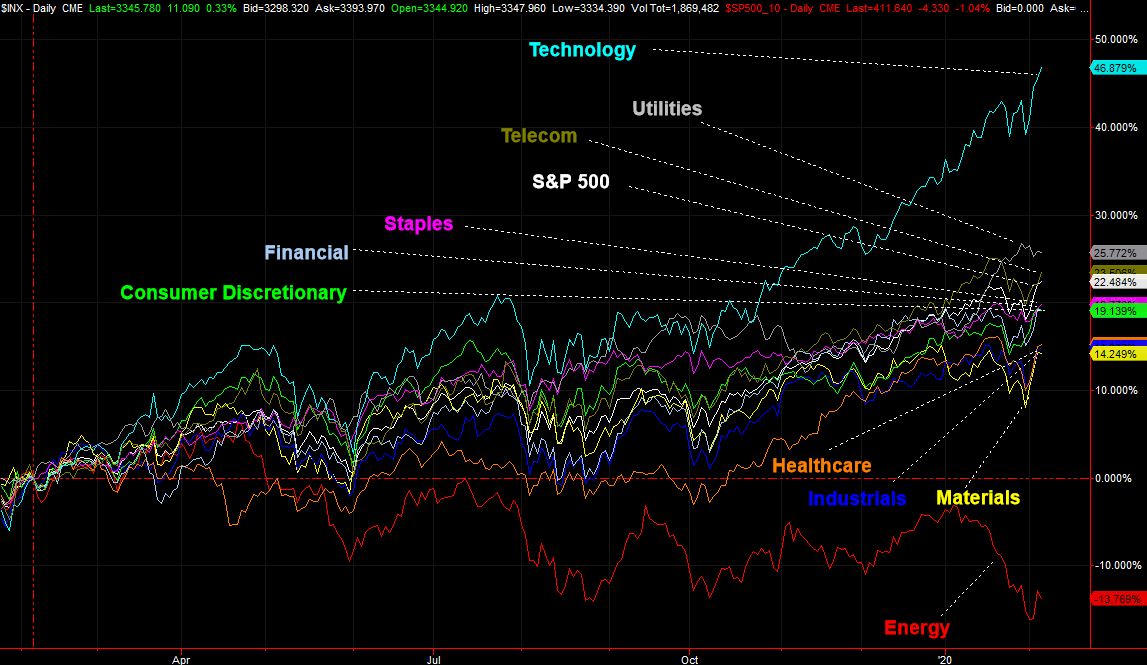 The sector comparison doesn't change the problem though. In fact, it compounds it. This rally is absurdly imbalanced, made top heavy by five of the biggest and THE five most influential stocks the market offers. Now at wildly lofty levels, should they turn, they'll likely drag other names lower with them. The "good" news is, at least they'll fall more than all the other laggards have risen over the past twelve months.

The trick here is the timing of any turn. The market imbalance actually became discernible several weeks ago, but it really didn't matter then. The divergence could widen before it narrows again, IF it narrows again.

It's still worth keeping tabs on though. As always, trading is a game of odds, and the odds are leaning in the direction of change.