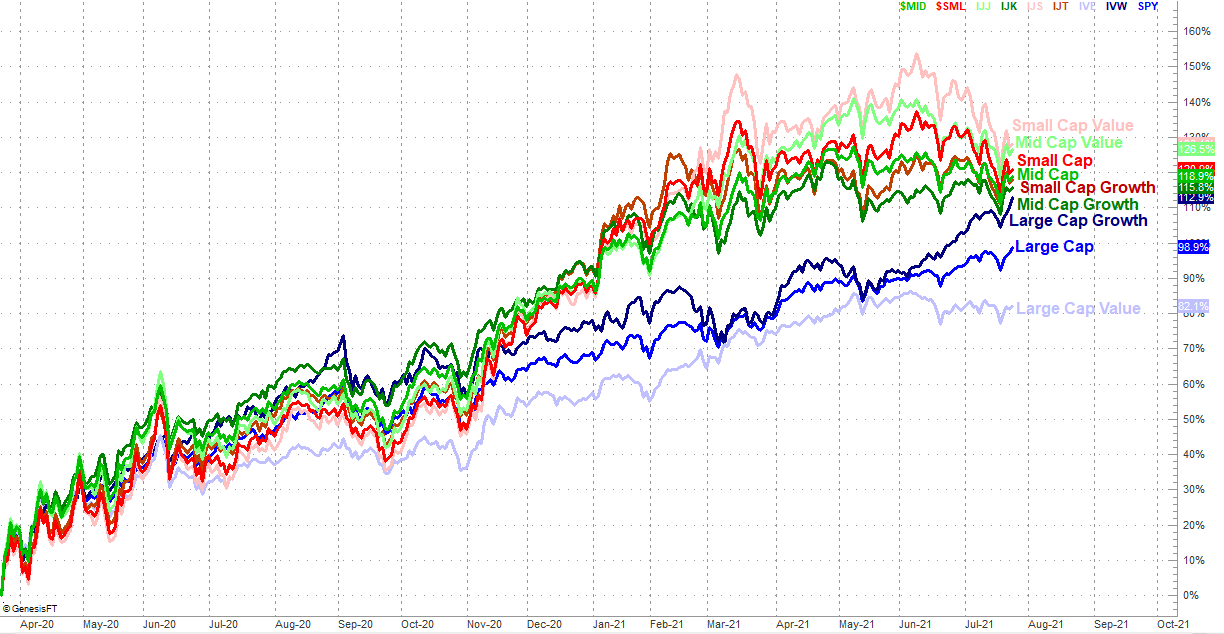 The market is firing on all cylinders again, with the S&P 500 up nearly a full percentage point on Friday, reaching record highs as a result. Not everything is as it seems on the surface though. Namely, only a handful of stocks are actually participating in the advance. Most are still struggling even with Friday's lift. It's a problem simply because a minority of already-overbought stocks can't keep things moving higher indefinitely. Something's got to give sooner or later, and most plausibly, things are going to give sooner than later.

The image below tells the strange story. Large cap growth stocks like Apple (AAPL) and Alphabet (GOOGL) have pushed past their May stumbles, hitting record levels (again) today. But, no other market cap or style grouping can make the same claim. Large cap value names are barely treading water, while all small cap and mid cap groupings remain in downtrends that first took shape in early June.

One could somewhat make the argument that large cap growth names are just offsetting weakness suffered earlier in the year, and that traders are simply rotating out of the small and mid caps that are sinking. And to be fair, there may well be some of that in play.

By and large, however, this isn't ideal if the goal is to keep the advance going. We'd like to at least see all or even most of these grouping pitching in some effort. They're not.

It's not the sort of dynamic that deserves immediate action. It's also possible all of this will change soon, either pulling the rug out from underneath large growth names, or sparking bullishness on all other fronts. Either would make more sense. In the meantime though, the trends in place are the ones we have to assume will persist until we have a clear reason to think otherwise. As such, this is just something to keep in mind. Nothing more.