Style Counter-Rotation Underway: Forget Everything You Thought Knew 4 Months Ago 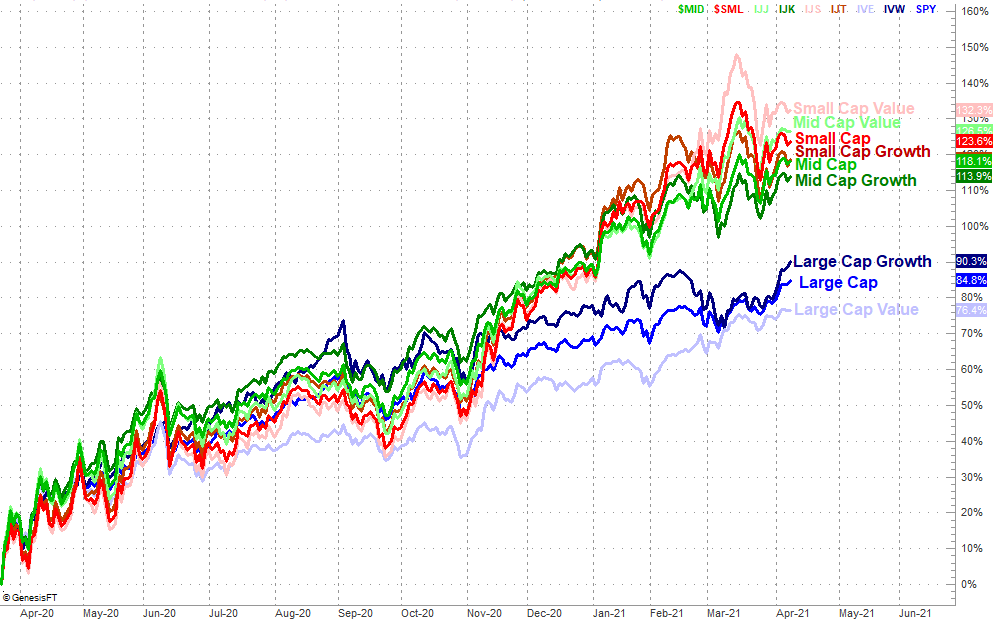 By late-October, a long period of bullishness led by large cap growth stocks we starting to fade... sort of. More specifically, mid caps and then small caps were taking the lead, at the expense of large caps. That divergence held through last month, and the early March bullishness appeared to widen it.

Then everything changed. In the latter half of March small caps and mid caps gave up their gains made in the first half of the month, and large caps barely budged. In the meantime large caps -- and large cap growth stocks in particular -- have started to soar again at the expense of small and mid caps. The graphic below puts things in perspective.

It's not entirely clear why this is happening. It's arguable that traders realized the large cap names they favored coming out of last year's February/March plunge (right when the pandemic made landfall in the U.S.) were becoming more than a little overvalued. So, they turned their attention to early-2020's laggards. And, in a similar sense it stands to reason these same traders now see than the small and mid cap rally since December was also far from being fully justified. What's odd, however, is that the rotation out of small caps and back into large cap growth names only rekindles the error that's been made twice now.

Or, perhaps this leadership from large cap growth names in the past few days is purely a fluke that's not meant to last.

Whatever the case, there's a handful of take-aways for traders nestled into the chart and its underlying trends.

First, regardless of the reason, large cap growth names are back en vogue. It remains to be seen just how long this new leadership will last, but as the old saying goes, don't fight the tape. Investors love to love these most recognizable names, and don't particularly care about valuation problems.

Take a second, closer look at the chart above. Notice how the very best segments of the past year have been value stocks... namely, small caps and mid caps. Also notice, however, that the very worst performers have also been value stocks, of the large cap variety. It's a stark disparity, but it's a disparity that might also indicate a bigger-picture secular trend. Or, it might not. While there are some proponents calling for a big paradigm shift that favors value names after years of leadership from growth stocks, we're not yet seeing any well-grounded evidence that this is happening where it needs to. (Or, maybe leadership from small and mid cap value names is the early form of that evidence.)

Third and lastly, know that it's still a few days too soon to start making sweeping conclusions about changing leadership. This is what the early part of a rekindled large cap growth stocks would look like, but thus far this can be chalked up to volatility.

This may seem irrelevant to some traders. Indeed, for some traders such data IS truly meaningless. For most traders though, there's more to be gleaned here than it seems on the surface.

Simply put, the little things add up. We know that large cap value stocks aren't likely to respond well to bullish technical signals, and we know that small cap value stocks are stretched. We further know that -- for the time being anyway -- the large cap growth stocks that weren't all that impressive just a few weeks back are proving particularly bullish now. If you're getting buy signals for some of them now, those may be more trustworthy than it seems they should be. None of these trends will make or break a trade, but it could be the difference between a 1-bagger and a 4-bagger.