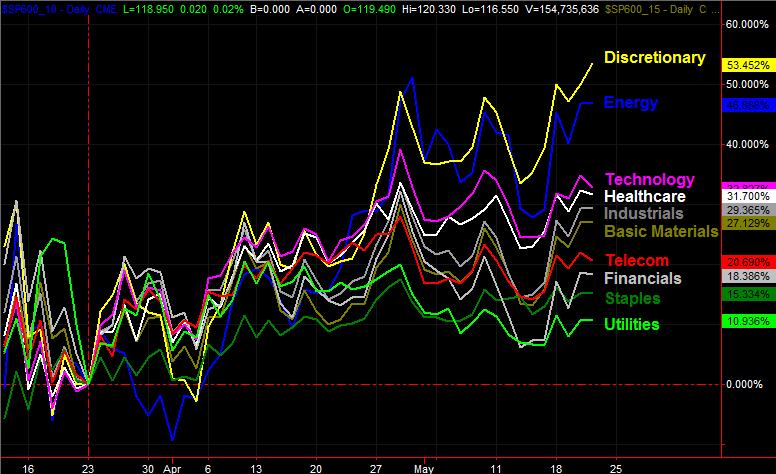 The marketwide rebound since the March 23rd low has been fairly indiscriminate. That's not to say every single sector, group, and region has rallied exactly the same. But, by and large, the rising tide has been lifting all boats to a similar degree.

We're starting to see some divergence though... not just among sectors, but among market caps as well. Best of all, the new leaders aren't necessarily all ones we'd expect to see taking the lead (although in other cases they are).

For large caps, energy has led the way. These names are up 60% from their March 23rd bottom, which makes a bit of sense. These names were also the hardest hit between February's high and the March low. They had the most ground to recover. Basic materials are second-best since then, though that's a distant second. There are a couple of other -- and more noteworthy -- nuances among the large cap sectors though. Namely, telecom stocks are picking up speed after getting a slow start in March. And, strangely enough, consumer staples are fading after logging a short-term peak in mid-April. That may reflect concern from traders that there is no real "second act' once COVID-19 finally starts to abate. Just so you know, the labels on the performance chart below are color-coded. If you're color-blind, the labels are also -- from top to bottom -- the same order of their respective performances since March 23rd. 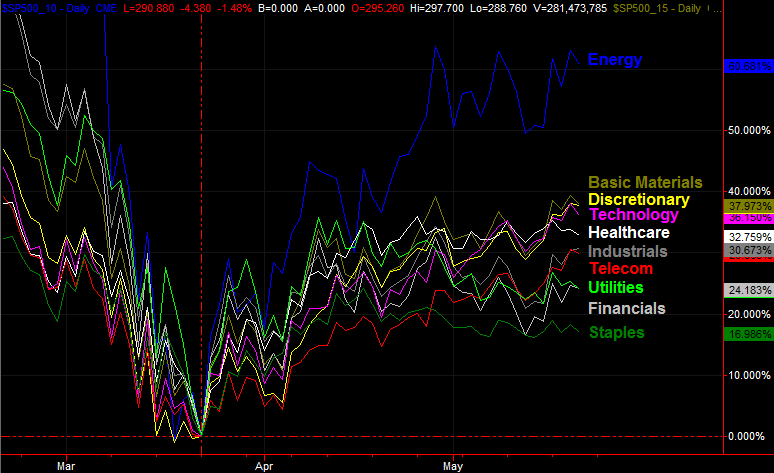 The curious group to watch is the industrials, which started to fade in early May, but have found new life this week. That may reflect expectation of a recovery and resumption of the world's manufacturing output, which isn't a crazy bet now that lockdowns are starting to end.

Things are slightly different when you drill down into the mid-cap arena. Energy stocks are leading here too, and by a country mile. But, it's the consumer discretionary names that are in a much-closer second place. Technology has been just a so-so performer, and utilities and telecom are dragging the bottom. Notice here that the industrial names are also starting to show signs of acceleration, although the acceleration from the discretionary names is far more impressive. 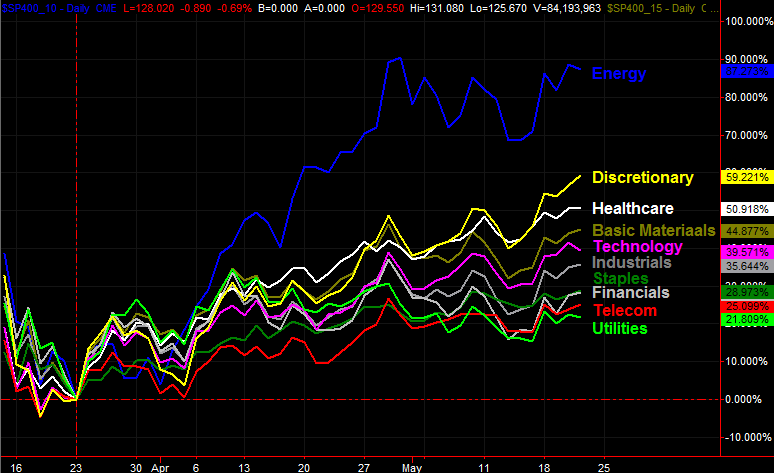 Things get even stranger when you move into the small cap realm. Energy names have done well here too, up 47%. But, they've not done as well the discretionary stocks that are collectively up 53% since the March 23rd low. Like the mid caps (and somewhat like large caps), financials, consumer staples, utilities, and telecom stocks are pretty unimpressive, and not giving any hints that could change soon. The group to watch among small caps right now is the industrials, and then maybe basic materials names. These clusters are dropping slight hints that their rallies are accelerating, but again, these discretionary stocks are just crushing it. This once again indicates expectations for a robust, post-lockdown recovery.

Not readily evident on any of the charts above is just how well the mid caps -- regardless of sector -- have been doing.

They're not actually leading, for the record. That honor belongs to the large cap growth names, which have gained nearly 42% since March 23rd, tied with mid cap growth stocks; big tech names and the FANG stocks in particular have been powerhouses of the rally. Mid cap growth names have quietly kept the same pace though, led of course by their energy and discretionary names. Curiously though, large cap value had underperformed mid cap value. In other words, the best broad market cap bet to make here is mid caps. 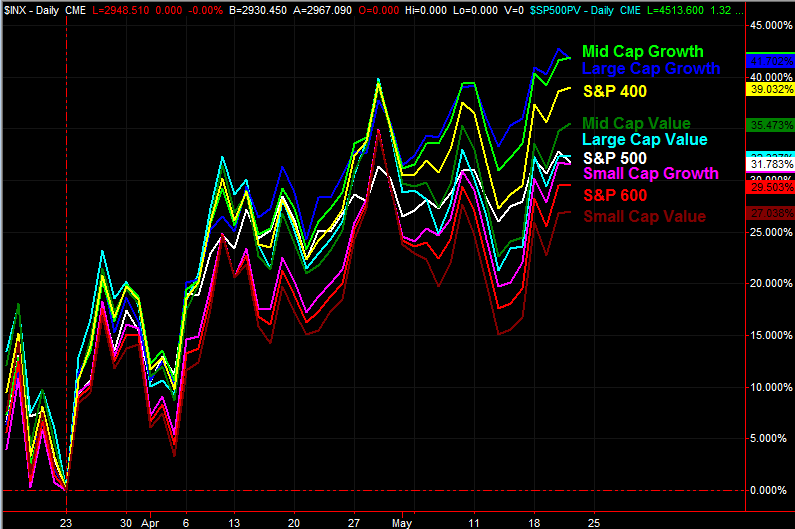 The surprising laggard of course is small caps, whether you're talking about the value or growth sliver of them. They'd been above-average performers for the better part of the cyclical bull market that got going in 2009. But, ever since the late-2018 meltdown, small caps have struggled. It's as if the market is saying it expects a cyclical downturn, which would hit the small caps first and hardest. We've not actually seen that cyclical headwind of course, but it does appear to be in the back of investors' minds.

These relative performances can change in an instant, of course, so take them with a grain of salt. On the other hand, these trends tend not to change in an instant, and instead start and stop slowly. They also tend to last long enough to turn the information into something actionable, like a trade.