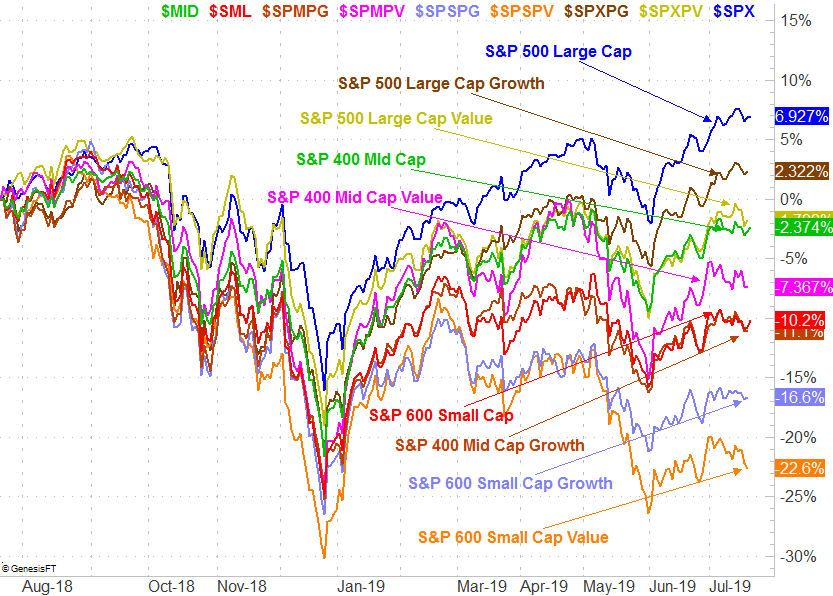 Most of the time, the use of the term ‘rotation’ in the context of the stock market refers to sector rotation… the rise of some sectors at the expense of others.

More often than not this is the result of investors fleeing from risk to certainty, or vice versa. But, it’s not uncommon for a particular area to fall in or out of favor for reasons other than cyclical or psychological ones. Case in point: Traders couldn’t shed energy stocks fast enough in 2015. They were looking for other places to invest that money though. None of it had a thing to do with the broad market’s health (or lack thereof). Rather, the concern was unique to oil and gas names, after the industry had started far too many fracking and drilling projects.

That’s not the only kind of rotation that’s possible though. Sometimes, investors are just as desperate to get into or out of certain market caps, or even styles. That is to say, on occasion it’s large caps as a group that are a bigger liability than small caps, or value stocks offer a lower risk/reward scenario than growth stocks do.

Anyone who’s kept their finger on the pulse of the market’s action of late likely knows that value stocks have taken a backseat to growth stocks, and small caps haven’t been able to hold a candle to large caps.

That may be about to change in a big way though.

One day does not make or break a trend. But, all big trends start out as small ones. To that end, Friday’s seemingly modest day for the market was actually an aggregate of some rather sweeping, but opposing, undertows. Namely, the long-beaten down small caps and value areas suddenly found new life, while large caps and growth names were fighting losing battles. 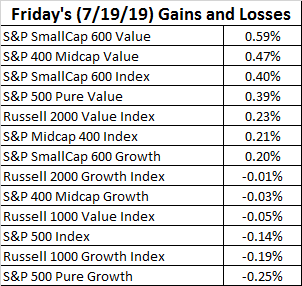 It’s not at all uncommon to see diametrically opposite segments of the market move in different directions on any given day; everything’s a trade-off.

Friday’s was an unusually wide disparity between unlike groups though, suggesting something bigger in play. It may have been the proverbial tipping point, at a time when large cap stocks don’t perform particularly well. The S&P 500 does especially poorly during the latter half of a third year of a Presidential term.

As for mid caps, they appear to be content remaining in the middle, regardless of any value or growth categorizations.

The implications aren’t complicated. If this is indeed a sign of bigger things now underway, value names and small cap stocks could start to outperform. There’s certainly a lot of ground to recoup too, with 29 percentage points separating the twelve-month leader and laggard.

That’s a very big ‘if,’ of course. Friday could have been a fluke. If small caps don’t have a distinct edge here, however, it would be an amazing situation. The S&P 600 small cap index is value at a multi-year low trailing P/E of 22.6, and a forward-looking P/E of 16.4. Though analysts tend to overestimate future earnings – particularly from small caps – even falling short of their current outlooks would leave the group at unusually low valuations.

Given that the market has yet to fall off a cliff despite plenty of things working against it (tariffs, politics, saturation, no need to buy new houses and cars), it’s unlikely we’re headed into a recession just yet. That’s the only thing that could feasibly up-end the potential rebound from small caps and value names.

Whatever the case, even for short-term and swing traders this is a noteworthy nuance. Large caps and growth names look like they’re running into a headwind, while small caps and value names appear to have finally caught a tailwind.

It could take a couple of days of the same to really be able to say such a rotation is underway.