FANG Stocks Update: The Whole Lot is Losing Out to.... Small Caps? 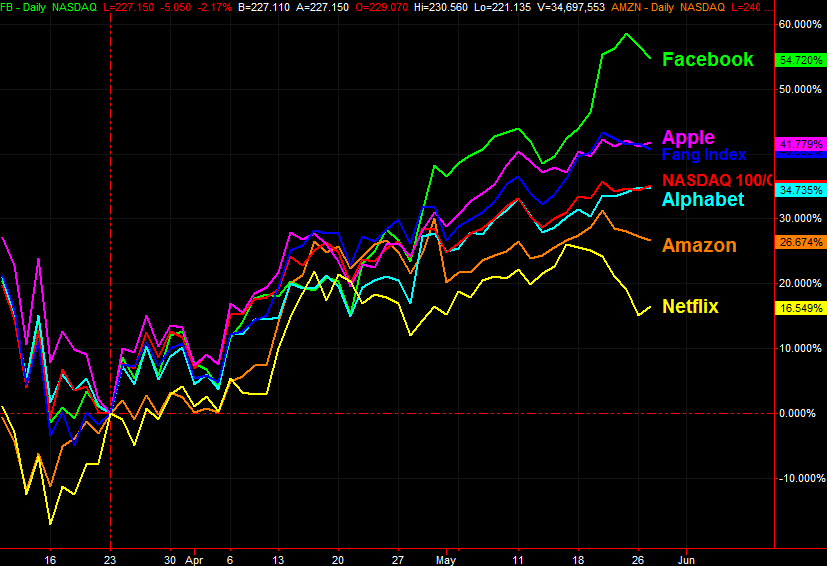 It remains to be seen if it's a good sign or bad, but traders are swapping out their favorite FANG stocks for other names.... the smaller, the better. The S&P 500 was up 1.3% on Wednesday, trailing the S&P 600 small cap index's 3.9% advance. The NYSE FANG Index, conversely, basically broke even in Wednesday's action. The relatively unmatched performances extend a trend that started to emerge in the middle of last week, but reversed a trend of clear laggardship from small cap names that we'd seen beginning with the March 23rd bottom.

The sudden shift in trading sentiment is a positive sign -- mostly. Small caps are generally seen as riskier bets, and with the great unknown of the coronavirus as the only real backdrop to take note of right now, traders have been hesitant to dig in too deep to smaller names. Indeed, the only real names of interest of late have been the FANG stocks and their kindred spirits, which are the only seemingly safe bets given the environment. The performance comparison of the NYSE FANG+ Index, the S&P 500 and the S&P 600 below puts things in perspective. 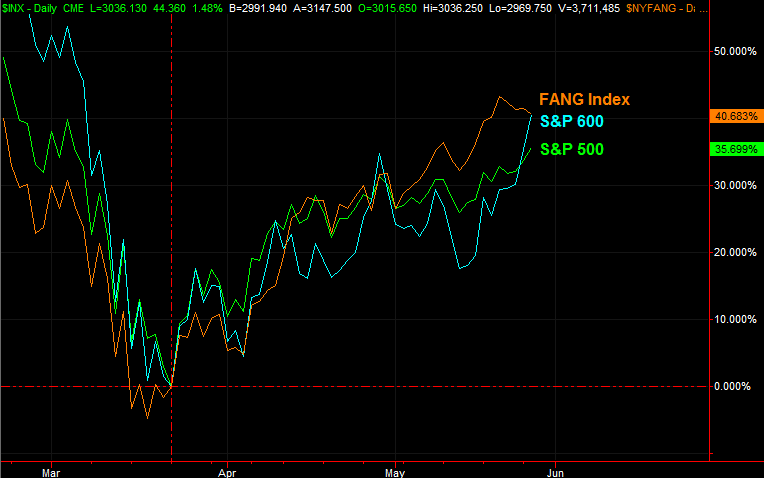 Curiously though, even within the FANG names (including Amazon, Alphabet, and Apple) we're starting to see a strange divergence. Facebook (FB) and Amazon (AMZN) have been hit hard since last week's high, though at least in the case of the former it was a result of profit-taking. Amazon's been strangely lethargic for some time. Apple (AAPL) is leveling off after a period of pronounced strength, and Alphabet (GOOGL) is doing the same. Netflix (NFLX) defied the headwind on Wednesday, but has otherwise been  a clear underperformer for the past few days. These are names that are supposed to be thriving on a coronavirus-crimped world. It appears the contagion-related strength may have already played out, and investors are looking for tomorrow's winners rather than yesterday's.

Drilling deeper into each FANG stock's chart, we can see clearer problems for a couple of them. Chief among the concerns is the way Netflix appears to be testing a floor at $396 for a second time since late last month. It's also clearer from this view that Apple's advance is slowing down without ever actually testing the early February high. Facebook crumbled when it bumped into a technical ceiling that connects all the key highs since April, though it's still too soon to assume the worst there. The bulls were plowing back in later on in Wednesday's session. 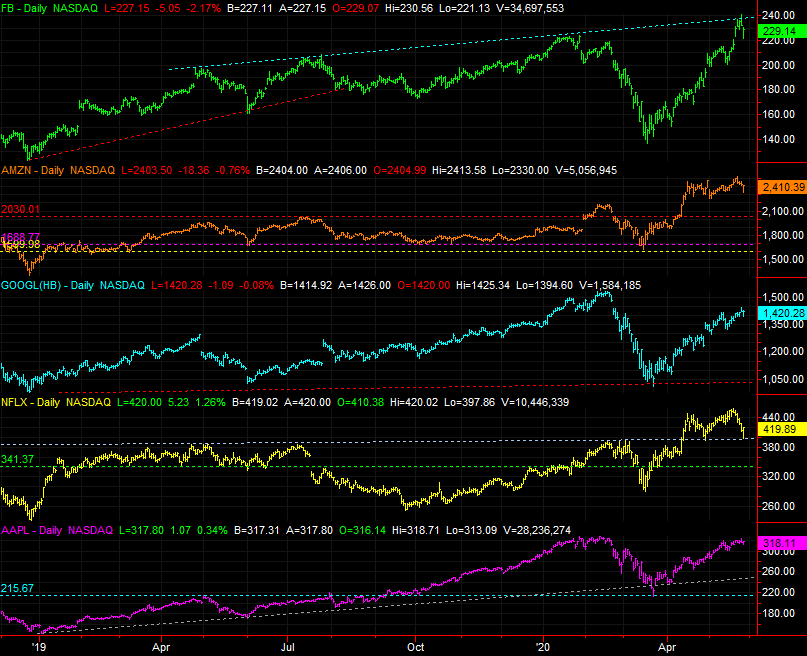 Don't be too quick to jump to sweeping conclusions. In the age of COVID-19, anything can and will happen. Nobody's really saying why they're getting out of FANG stocks and into small caps; they may not even realize they're doing it. They may not even mean to be doing it.

This is a very interesting and somewhat unexpected dynamic though, and somehow seems unlikely to be a whim. Conscious of it or not, this shift seems fairly calculated, which is the kind of shift that tends to last for a while.

If you'd like to take full advantage of the unique action of the FANG stocks, take a look at our FANG Options Advisory. We look at the nuances of each FANG stock to make trading decisions using the market's most popular, best-moving names. Go here to learn more.