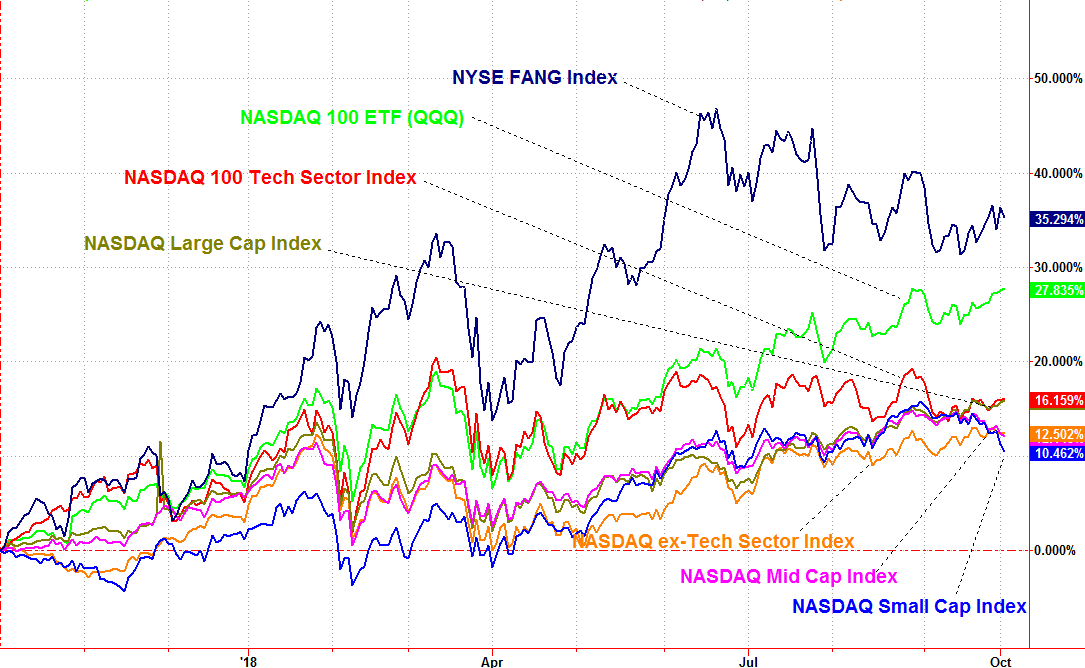 A couple of weeks ago we took a look at the brewing weakness in small cap stocks. Though the S&P 600 had been the hottest index for the prior twelve months, the weight of those gains was starting to bear down. Though the S&P 500 large cap index and the S&P 400 mid cap index were still inching higher, small caps were waning.

In the meantime, that weakness from small caps seems to be infecting more and more stocks. In fact, although the S&P 500 and NASDAQ Composite still appear to be doing just fine, a closer look under their proverbial hoods reveals that most stocks are struggling. Only the biggest and most influential names are continuing to thrive. But, they can't do it alone.

Below is an updated version of the chart we primarily reviewed back on September 19th. Not only has the small cap index continued to slide, the mid cap index has bumped into a headwind as well. 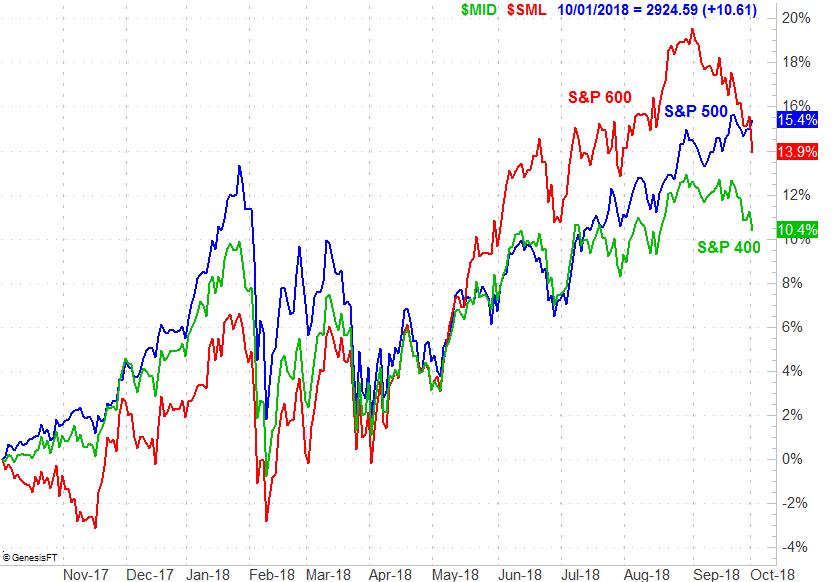 But as long as the large caps are doing well, that's enough? After all, they account for about three-fourths of the total market cap. 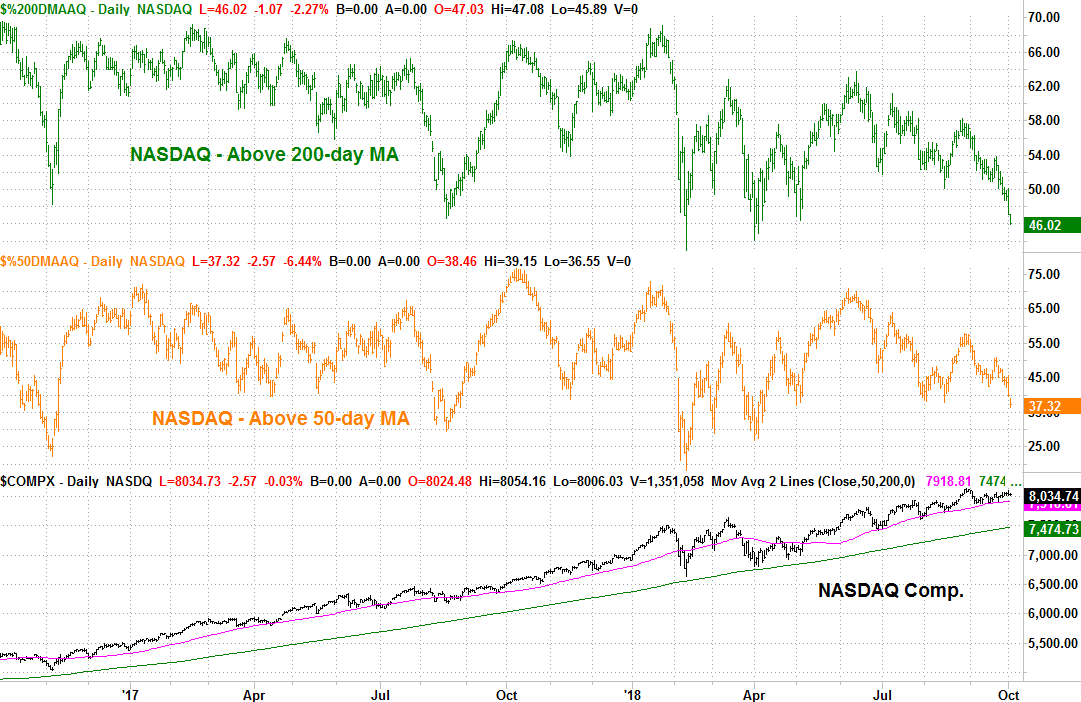 What gives? The answer isn't strictly an intuitive matter, but it does require some intuition to confirm the suspicion. In simplest terms, the market's very biggest and most influential names that are 'tech-like' if not actual technology names are doing amazingly well, even if few other stocks are.

And for the record, when you look beyond the market's five most-watched stocks - each of which is a NASDAQ 100 constituent - the fundamentals don't look all that compelling either. The overall earnings growth trend and collective P/E are unduly influenced by the biggest five, which alone make up a stunning 47% of the cap-weighted NASDAQ 100.

It's a matter that can be boiled down to one question: Can the FANG stocks and their peers shoulder the whole market and keep this rally going, because no other sliver of the market is meaningfully helping out now?

For the record, the S&P 500's comparable data doesn't look quite as grim, though it's far from heroic... especially when you remove the top five names from its mix. It raises the same overarching question. And, though the S&P 500 may not appear to be in the same dire straits the NASDAQ 100 or the NASDAQ Composite are in in terms of stocks that are above or below their 50-day and 200-day moving average lines, it's certainly got trouble of its own. Namely, the NYSE's breadth and depth continue to lean bearishly.

The image below should be relatively familiar. It's a look at the NYSE's daily down volume, up volume, advancers and decliners. Not that the bearish action on any given day in the past several weeks has been terrifying, but there's a clear lack of advancers and buying volume. Generally speaking, rallies that last tend to do so in increasing levels of bullish volume and at least a steady, above-average numbers of advancers. 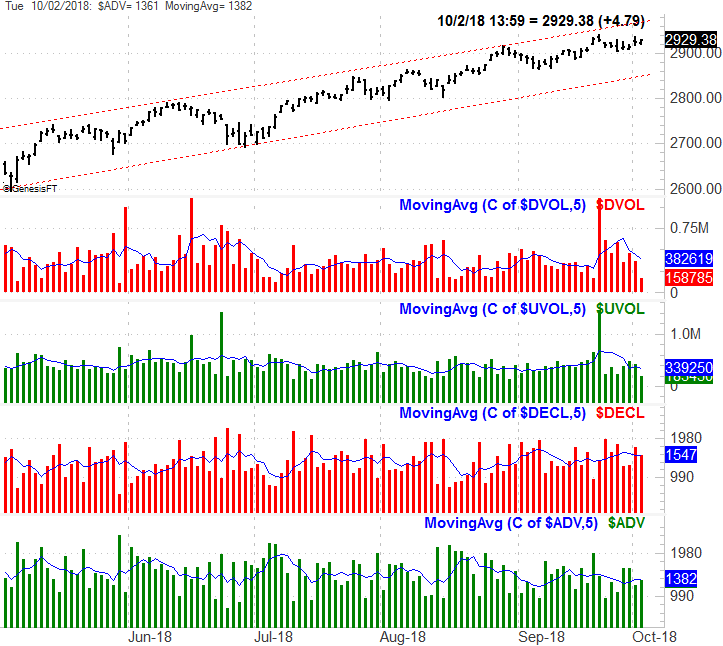 Here's the same chart for the NASDAQ's comparable data. There's just not enough persistent bullish interest on the table right now to keep the whole market pushing higher. FANG stocks and other high-profile, market-moving names can't get the job done on their own. 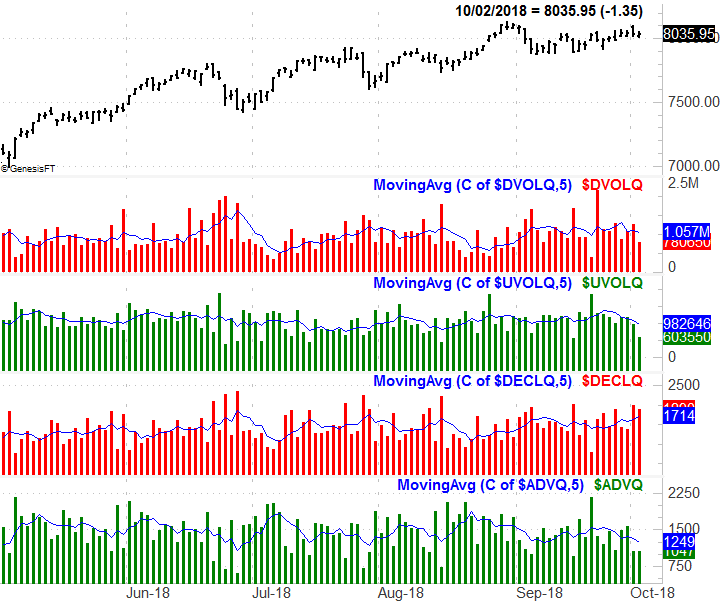 Until these things change, the bulls are fighting a battle they can't even see.

Are you looking to take advantage of the unique characteristics FANG stocks clearly exhibit? You should! In some regards they're the market's most predictable names, and they consistently dish out the kind of volatility that option traders need. If you want to capitalize on the opportunities that only FANG names offer, the BigTrends FANG Options Trader Advisory Service is what you need.