Does January's Loss Set The Stage For More Downside? 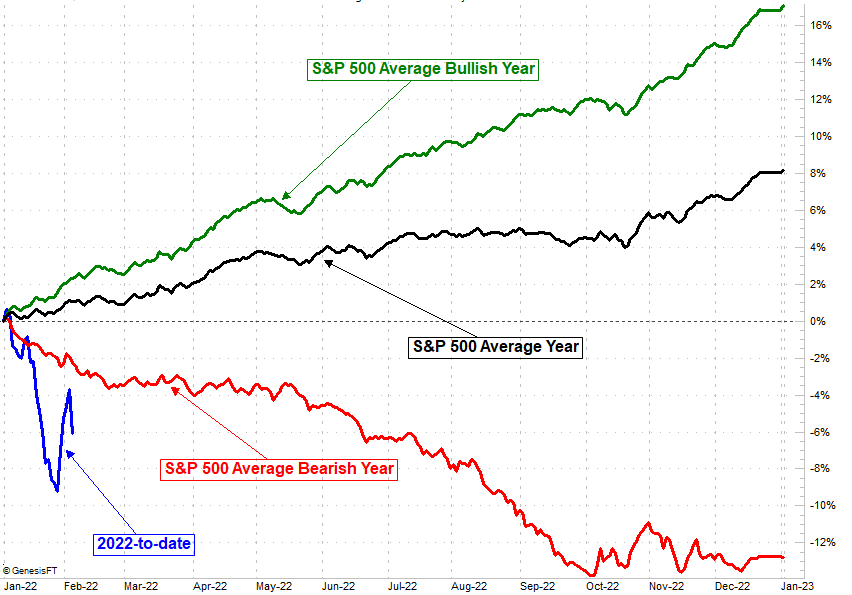 Following January's sizeable losses for the broad market, it would be easy to be concerned about what's coming the rest of the year. While it shouldn't matter, perceptions are powerful. It would be very easy for investors to presume things are going to be bearish this year, after the tone set in January. Lackluster jobs figures only underscore the prospect that earnings growth this year isn't a foregone conclusion, which of course will work against stocks.

But what about something nearer-term? That is to say, does January's loss set the stage for an ugly February?

As it turns out, not necessarily. Going all the way back to 1950, only 15 times has the S&P 500 logged a loss in January as well as February. Granted, during those 72 years, January's only dished out a loss 29 times, so a February selloff following a January pullback is actually fairly uncommon. Looking at the data from another angle though, the odds of a pullback in February of 2022 are actually around 50/50, now that we've suffered a loss last month.

Add this to your odds-making toolkit: Regardless of what happens in January, the S&P 500 has only logged a February loss of in 31 of those 72 years; half of those losses have taken shape when the preceding January is a loser.

Perhaps the bigger worry here, however, isn't what January's dip means for the current month. Far more curious is what a January and February selloff might mean for the whole year.

As you did with word problems in your high school math class, read this carefully so you understand what's being said, and what's NOT being said: In most years that are full-year losers, January and February are both losers. That's not to say, however, that the market usually logs a full-year loss when it suffers a setback in January and February.

The hard data: In the 18 years since 1950 the S&P 500 has posted a loss for the whole year, seven of those followed a loss in both months in question. That's more than a little, though not necessarily a lot. Still, given the infrequency with which any or all of those things happen at all, back-to-back monthly losses here is at least a concern for all of us. Remember, before all the coronavirus craziness, the stock market was in its twelfth year of a bull market. There are still a lot of excesses to wring out of it, and more so with all the stimulus injected in the throes of the pandemic.

In other words, we're still due for a more serious correction that most would instead call a bear market.

None of these statistics and data are something anyone should blindly take to heart, of course; it's just information. None of it substitutes for disciplined, level-headed interpretations of what's happening with stocks every single day.

On the other hand, information and added perspective can never hurt.