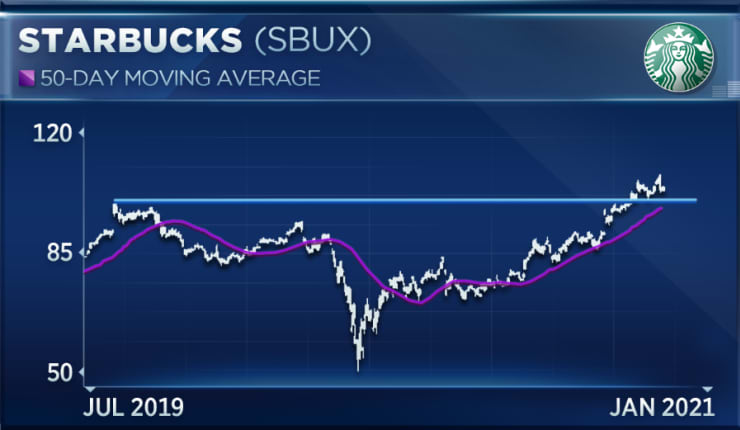 Could the consumer be key to 2021 stock market gains?

Tesla and Starbucks, prominent holdings in XLY, were the subjects of some optimistic analyst calls: Morgan Stanley raised its price target on Tesla to $810 and reiterated its outperform rating. while Barclays named Starbucks its top pick for 2021 among restaurant stocks.

Foot Locker, one of XRT's holdings, was named a "positive fresh pick" by Baird.

"There are so many crosscurrents" in the market, including politics and interest rates ticking hire, said John Petrides, portfolio manager in the wealth division of Tocqueville Asset Management.

But one thing's clear: "the U.S. consumer is turbocharged right now," Petrides said in an interview with CNBC's "Trading Nation" on Wednesday.

"We have more stimulus that's been thrown into the U.S. consumer, the cost of borrowing money is really low, saving rates are at an all-time high and the overall economic story is moving in the right direction," he said. "As we get past Covid and as more vaccines get distributed and get accepted, the consumer's going to be spending more money."

"This is early-cycle leadership," he said in the same interview. "It's not just tech anymore. It's broadened out into consumer cyclicals, industrials, materials, financials, and so, I think it leads to additional market gains and you want to be in the stocks that typically outperform in a rising market."

Starbucks could be one such stock, said Wald, pointing to what he called its "strong" technical chart.

"It's breaking out above its prior high dating back to July of 2019. We think that is marking a resumption of the stock's long-term uptrend," he said. "I think that's the new floor. Very often, prior resistance becomes support. That's $100. You've got the 50-day moving average sneaking up there as well."

Add in the fact that Starbucks is rated outperform by Oppenheimer's fundamental analysts, and "you have these dual tailwinds supporting that stock price," Wald said.