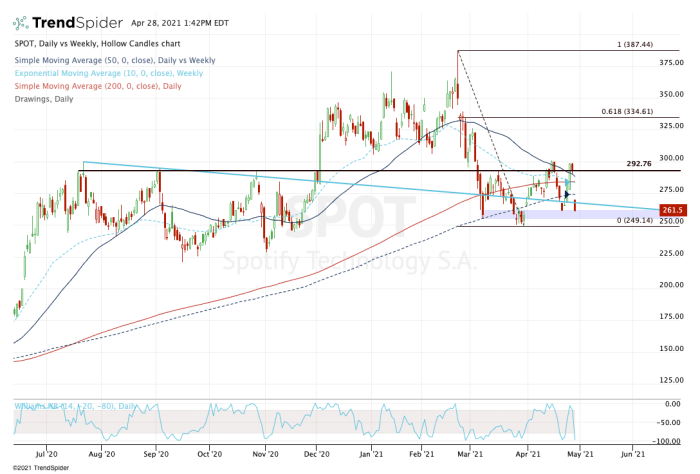 -- Spotify is getting hit hard on earnings, dipping into a key support zone. If it fails to hold, more selling could be around the corner. Let's check the chart. --

Spotify (SPOT) stock is not reacting well -- it's down about 9% -- to the music-streaming company's earnings report.

The stock is retesting this month's low after the reaction to its first-quarter results.

The company reported a widening loss per share, while revenue was only in line with expectations. Worse, Spotify trimmed its full-year estimate for monthly active users.

It's not a huge reduction, but it does chip away at the bull thesis a bit.

The report comes less than a week after Jefferies rated Spotify as a buy and after the company unveiled a price increase for some of its subscriptions.

Interestingly, MAUs are also what's hurting Pinterest (PINS) on Wednesday. Will it hurt Facebook (FB) when it reports tonight?

Regardless, it's what's pressing Spotify, as the stock toys with a key support area.

Unless Spotify stock can reverse some of its losses, Wednesday's action looks concerning.

Specifically, the stock broke below the 50-day, 200-day, 10-week and 50-week moving averages. It also broke back below prior downtrend resistance (blue line).

Perhaps worst of all, it couldn't hold up over $292, a level it's tried to clear twice now this month and failed both times.

The $292 level has been support and resistance (mostly the latter) for almost a year now. To fail so epically is not a positive sign for the bulls.

On the upside, let's see if the stock can find its footing and reclaim the 50-week moving average near $275. Above that puts $292 back in play, followed by the $300 level.

Over $300 and the party can really get started. But from where we're standing now, that looks like a tall and unlikely task in the short term.

For now, see how it handles this critical support zone.