Plug Power Is Surging! Here's When I'll Jump In 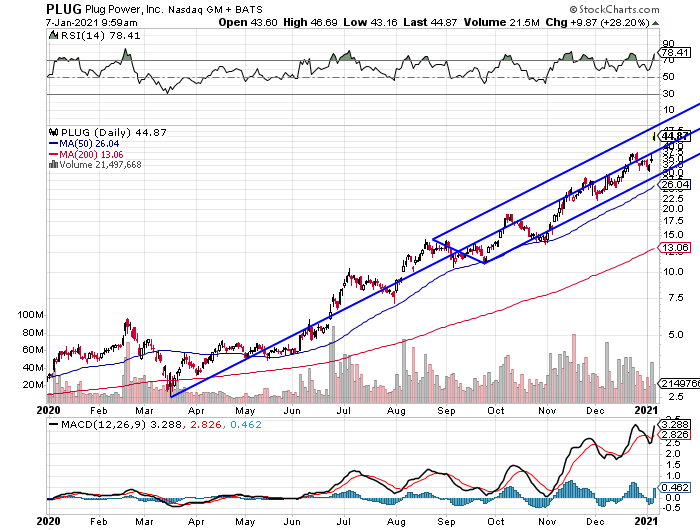 - There's no quit in PLUG, a leader in building out the 'hydrogen' economy -

Let's start at the beginning. About a year ago, the South Korean government announced the "Hydrogen Economy Roadmap" that lays out an ambitious green agenda to run through the year 2040. Fast forward all the way to Wednesday night. Plug Power (PLUG) and SK Group (of South Korea) announced that the two companies intend to form a strategic partnership to accelerate hydrogen as an alternative energy source throughout Asian markets.

Plug Power and SK Group plan to grow hydrogen fuel cell systems, and hydrogen fueling systems to Korean markets specifically, and then to Asian markets more broadly. As part of this partnership, SK Group has entered into a definitive agreement to make a $1.5 billion strategic investment in Plug Power while also announcing that the two will form a joint venture company in South Korea.

Plug Power CEO Andy Marsh commented, "SK Group has an established strategy for building out the hydrogen economy in South Korea and beyond. The current relationship with SK Group offers immediate strategic benefits to Plug Power to accelerate its expansion into Asian markets... and is intended to result in a formal joint venture by 2022."

The Pitchfork model that I showed you three weeks ago is still very much intact. However, the last sale has moved from the lower chamber into the upper chamber. This is where it gets tough. Thursday's action has produced a gap. We know that gaps usually do fill. The stock's placement in the Pitchfork also suggests potential for short-term resistance.

That said, do any of you see the political will to get behind green energy withering or growing over the next two to four years? Yeah, me neither. PLUG does not report for a while. No announcement has yet been made, but we are probably looking at the first week in March. Revenues have grown by 80% plus in two of the past three quarters. I see no reason now that anything less will become the norm moving forward.

I want to buy some PLUG. I also want to buy some FCEL. I can not do so at the top of the chart on top of a gap. My code of discipline does not allow for such activity. Perhaps by day's end, certainly after the close of business tomorrow (Friday) night, I expect to take the first baby steps toward building these positions. No more trading for a quick 6%, these are going to be investments that will be built over time. Speaking of time. the time has come. For me. To evolve.