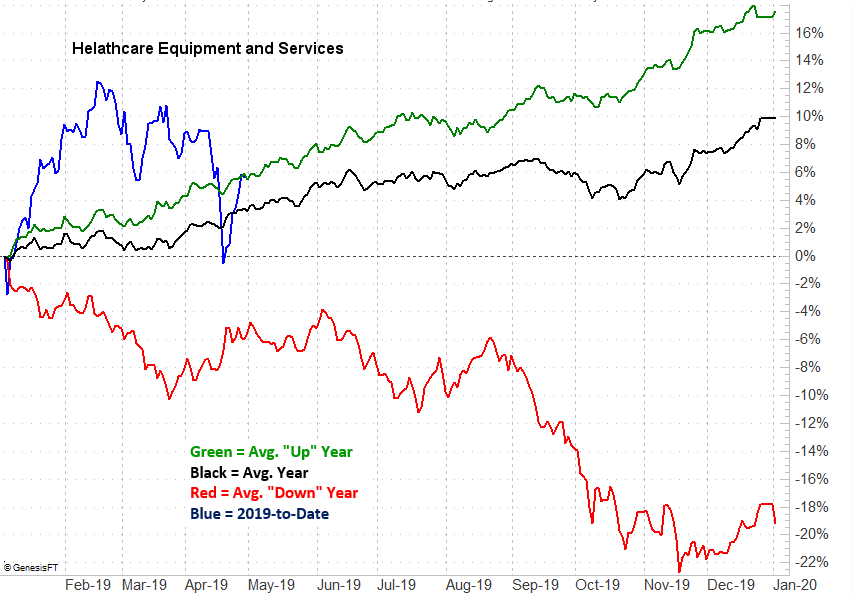 Generally speaking, the month of May isn't a great one for stocks. Between graduations, vacations and the froth built up from the usual bullishness seen over the course of the first four months of the year, stocks tend to take a break at this time of year. To quantify the tendency, since 1950, the S&P 500 has averaged a 19% gain for the month of May, logging progress in 41 of those years, but losing ground in the other 28.

This year isn't looking like it's going to be a wild exception to the norm, particularly after such a hot start to the year. The S&P 500 is up roughly 24% since the late-December low.

The usual tepidness isn't uniform, however. Some groups manage to hammer out a decent gain no matter what, while others are almost destined to disappoint.

With that as the backdrop, here's a look at the industries and groups most like to move the most this month, for better or for worse.

There's rarely a bad time to own beer-brewer stocks. These names tend to make forward progress at a slow and steady pace, even after the usual rough start to the year. The typical May leaves behind a modest 1.4% advance, but the group keeps walking at that pace until September. 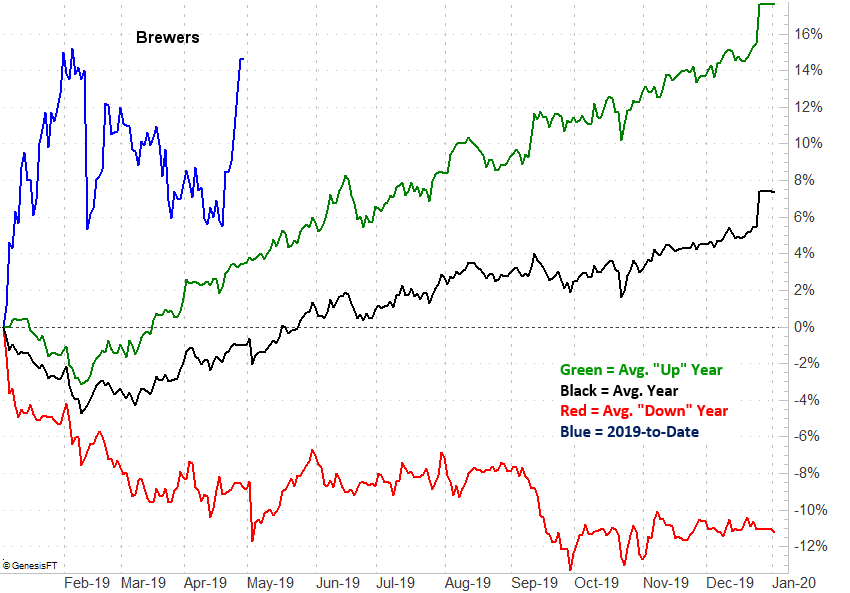 Biotech names tend to get the year started on a bullish foot, though that surge started to fade in late February. The weakness lasts through April too. Beginning in May though, things start to take a turn for the better. While the group only averages about a 1.4% advance for the month ahead, traders won't want to miss the beginning of what's usually a good June and an even better July. All told, biotechnology stocks gain an average of 7.7% for the three-month span. 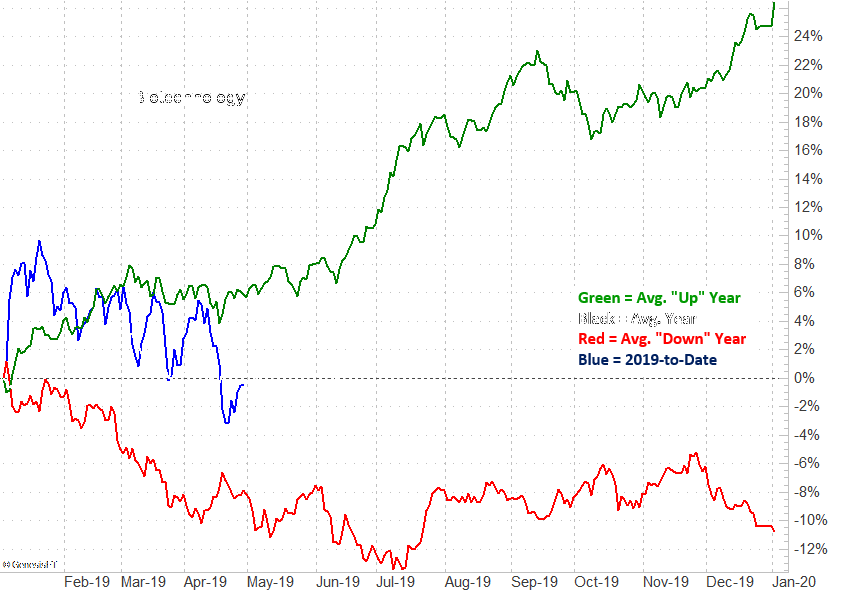 The 1.6% gain healthcare equipment and service names log in their typical May isn't remarkably different than the advances they reap in other months. But, they're one of the few grouping that perform well while other areas don't. May is also only a small segment of a bigger rally that lasts through mid-July. April's tumble from these stocks has set the stage for an unfettered advance.

The month of May actually begins a tough two-month stretch for bank stocks. The group loses about half a percentage point in the coming month, leading into an average loss of about 1.5% in June. Even in a good year, the group doesn't do all that well. In a bad year, it does noticeably worse. The group is starting out this summer stretch in an overbought condition. 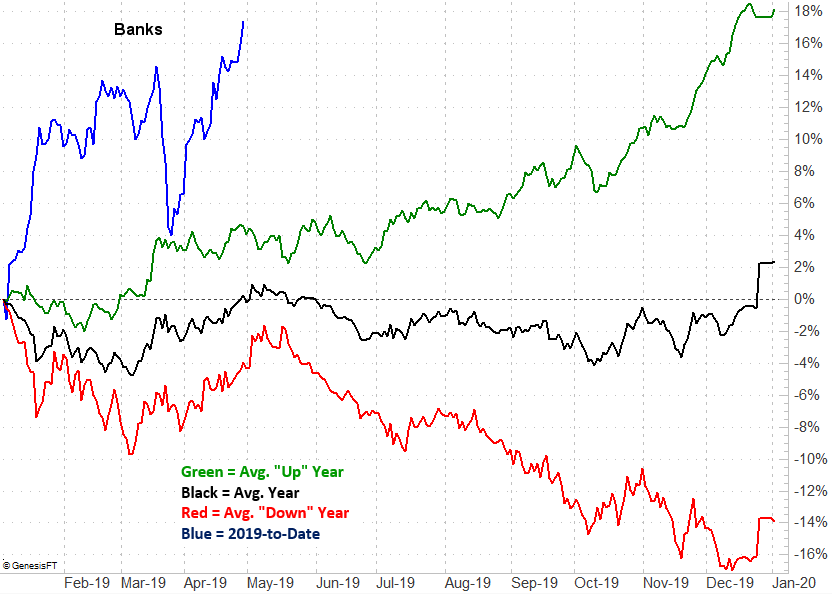 Home furnishing stocks tend shrug off a reliably sluggish start to every new year and hammer out a nice advance in April. But, like clockwork, that gain turns into profit-taking in May that bleeds into and through June. The average setback for furniture and decorating names in the month ahead is a loss of 1.4%, followed by a 3.5% pullback in June. This year has shaped up a bit differently than most, but only in the sense that the early gains have set up an even bigger summertime swoon. 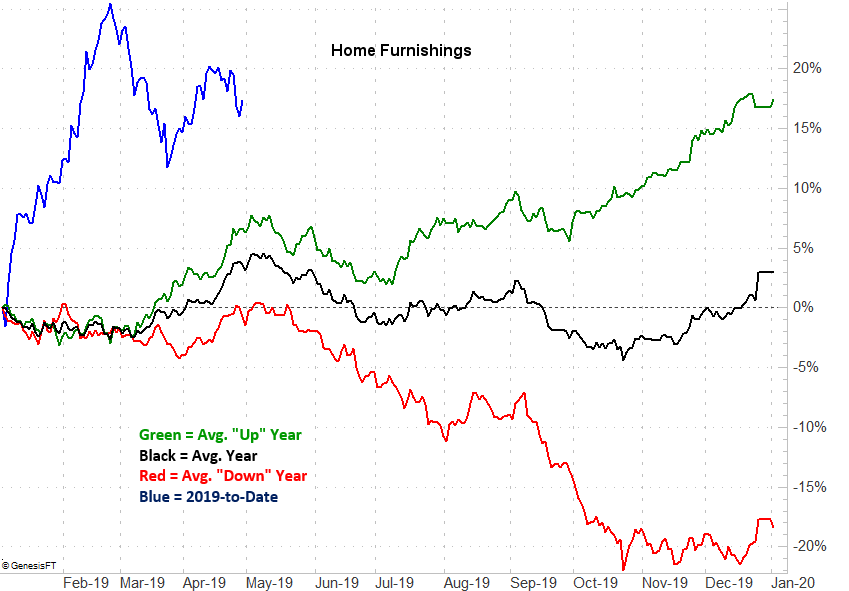 There's never a great summer to be holding personal products names like Avon Products (AVP) or Nu Skin (NUS), but the big gain from these names earlier this year could prove problematic in the very near future. Even in a bullish year these names collectively lose about 2.5% of their value, and lose roughly 3% of their value in the typical May-June stretch. They're starting this May up 28% from the end of last year. 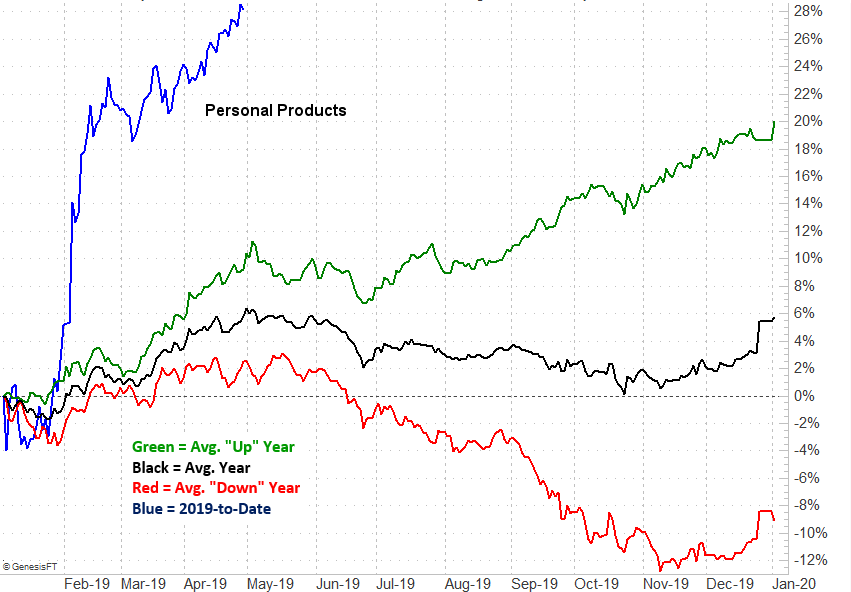 A calendar tendency is clearly no guarantee of a future result. And, current market circumstances make them even less reliable now. The fourth quarter drubbing set up a first quarter rebound which has left stocks technically overbought, but only back near September's high. Traders are still trying to get a grip on what's supposed to happen here.

Nevertheless, averages are averages for a reason. Even if only three or four of the aforementioned averages bear fruit as expected this time around, it will be an endeavor worth tackling. The market isn't "won" just with big, sweeping victories, which are actually rather rare. The market is one by pocketing nickels and dimes over and over again. That's the target the above charts are aiming at.