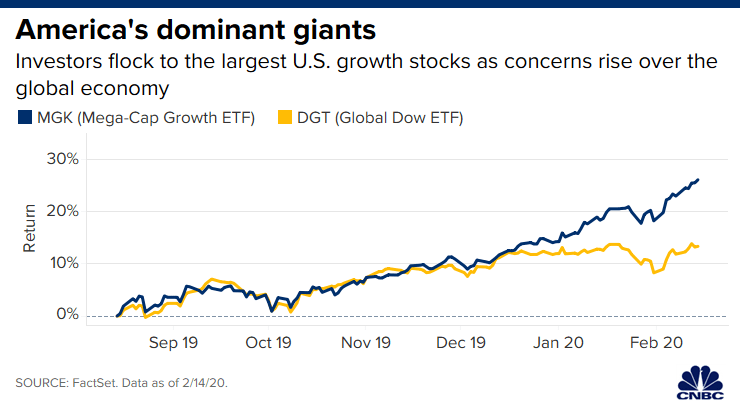 The way markets have been acting this year, treating high-quality American assets as a haven, makes sense. But even a sensible move can reach extremes and create distortions.

The trick is trying to figure out when rational activity takes conditions to a riskier place. It’s unclear we’re there yet.

That’s right — even though the coronavirus outbreak upended expectations for an early-2020 economic reacceleration led by trade and manufacturing — the fact the S&P 500 is at a record high, and the manner it got there, are not illogical.

In response to the vast uncertainty of Chinese economic performance, the U.S. has outperformed the rest of the world, and within the U.S. market, secular growth and defensive stocks have propelled the gains and had their valuations expand.

The winners and losers

The year-to-date performance of S&P 500 sectors line up just as one might expect, given these dynamics. At the top: utilities, technology, real estate and consumer discretionary. Lagging the benchmark are energy, financials (thanks to those low yields) and industrials.

More thematically, the largest companies viewed as having the most reliable future growth and profitability are attracting more than their share of the world’s capital.

When investors buy bonds as aggressively as they are now – with Bank of America saying last week set a record for fixed-income fund inflows – it means they are flocking to “duration,” or long-lived cash flows. Huge-cap growth stocks are, in a sense, long-duration assets as well, existing somewhere adjacent to corporate bonds on the spectrum of assets.

And so, we see the liftoff of the Vanguard Mega-Cap Growth ETF versus the Global Dow. The latter is a roster of multinationals that has stalled, while the glamour stocks of the Nasdaq carry the MGK skyward.

Tom Lee of FundStrat Global Advisors, says U.S. equities represent a “safety trade trifecta.” That is, the U.S. has better growth; the S&P 500 is a more growth-geared/large-cap index; and there is, in the current context, a perceived scarcity of S&P 500 market value to go around in a world of $300 trillion household liquid assets.

It’s become commonplace to argue that the stock and bond markets are sending conflicting messages, with the 10-year Treasury yield back under 1.6% and the S&P 500 grinding out fresh records. Yet the 10-year Treasury is flat over the past four years, during which the S&P 500 has gained some 80%. And in recent years when the 10-year yield was much above 2.5%, equities have made essentially no net progress.

Both stocks and bonds seem to be saying this is a low-growth, tame-inflation, high-liquidity environment, until proven otherwise.

Real investment-grade corporate bond yields are scarcely above zero. The Chicago Fed National Financial Conditions Index shows the liquidity backdrop is as loose as it’s been this cycle, matching its most-accommodative readings from late 2017 and mid-2019.

A clear majority of S&P 500 stocks have dividend yields exceeding the 10-year Treasury yield. While no perfect relative-value indicator, this tends to provide a buffer underneath equity valuation.

Still, in absolute terms, those valuations are starting to get pretty stretched. The forward price/earnings ratio of the S&P 500 now exceeds 19, the high for this bull market, while the expected rebound in profit growth keeps getting pushed ahead into the future by the global industrial slowdown.

The P/E of that Vanguard mega-cap growth basket that so many investors are hiding in is now 30, leaving a diminishing margin for error.

A cluster of what might be called “idiosyncratic speculative-growth” stocks are also acting quite frisky this year, a sign that investors are grasping aggressively for the next big thing (or perhaps just the next quick buck). You know about Tesla, up 91% in the six weeks of 2020. But there’s also Beyond Meat, up 52%, Virgin Galactic, ahead by 134%, and Shopify, up 35%.

Further along the investor-mood front, Friday’s University of Michigan consumer sentiment survey, the percentage of respondents who said the stock market would be higher in a year reached its second-highest reading since 2002, only exceeded by the peak at the start of 2018. Stocks had a stiff gut check not long afterward.

Bank of America global strategist Michael Hartnett, who has been correct in calling for a strong run in risk assets into early 2020, continues to recommend playing this trend until investors grow more clearly “euphoric,” which he expects will mark the moment of “peak positioning and peak liquidity.”

More specifically, he says, this would come when the S&P 500 surpasses 20-times forward earnings and when the bond and U.S. dollar rallies become “disorderly.”