GE Has Been One of the Best Stocks of 2023. Can It Continue? 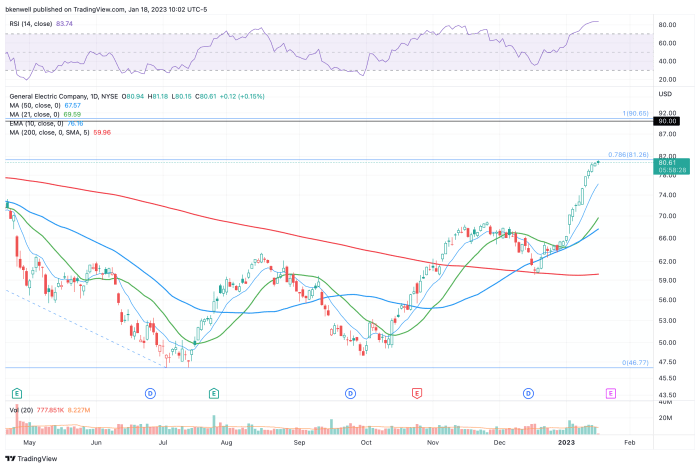 -- General Electric has rallied in every session so far in 2023. Here's how we're trading this one now. --

It's been a tough start to the year, although the bulls are starting to gain some momentum.

For General Electric (GE) though, it hasn't been a contest: The bulls are dominating.

A year that started off with Apple (AAPL) making new 52-week lows and concern that still surround inflation, the Fed and a recession have not made things easier.

For GE stock, though, it's been the complete opposite. The shares have rallied in every session so far in 2023 and have climbed in 12 straight sessions. The stock is up more than 24% so far this year and 27% in the current win streak.

While the stock was already enjoying a three-day win streak, General Electric's spinoff of its health-care unit sparked a strong rally.

The shares rallied almost 6% that day and inspired investors to become dip buyers as the stock cleared major resistance. The only problem? There hasn't been a dip!

Noteworthy is that GE stock previously enjoyed a 12-day win streak in July. It was followed by a 4% peak-to-trough decline, then another 11% rally.

The breakout over $68.50 has been impressive and I suspect that even the bulls are shocked by the run in GE stock since.

All that said, we must be on watch for a potential pullback.

That's particularly true as the shares run into the 78.6% retracement. While it may not be the most widely followed retracement level, it's still one of the major ones to keep an eye on.

If GE stock is unable to sustain above the $81 to $82 level, then a pullback into active support seems likely.

That is the first level of support. If, however, the market comes under stronger selling pressure, GE stock might find itself retesting the $68.50 breakout level, along with the 50-day moving average.

If GE can eventually breakout over $81 to $82, it opens the door up to longtime resistance at $90.