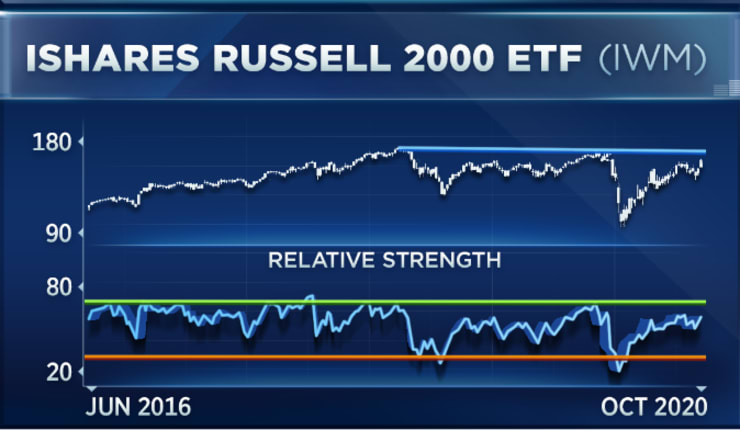 The small-cap rally is gaining steam.

As of Thursday, the Russell 2000 was up almost 6% week to date versus a nearly 3% gain for the S&P 500. Though small caps are underperforming the S&P year to date, they have begun to outpace the large-cap index in the last month.

Fueling the move is "a rotation out of tech and into the more cyclical names like financials, industrials and even health care" as investors bank on more stimulus and a successful coronavirus vaccine, said John Petrides, a portfolio manager at Tocqueville Asset Management.

"Even value has outperformed growth slightly over the past couple of weeks," Petrides told CNBC's "Trading Nation" on Thursday.

Those cyclical sectors are strongly represented in the Russell 2000, which is roughly 21% health-care stocks, 15% industrials and 15% financials - very different from the Big Tech-heavy S&P, whose top five holdings are Microsoft, Apple, Amazon, Alphabet and Facebook, Petrides said.

"We definitely like ... small- and mid-cap stocks to round out client portfolios from a diversification standpoint, but you have to look under the hood," he said.

"I would look at selling into this recent rally in small caps," he said in the same "Trading Nation" interview.

"It's always interesting to try to think that you've found the bottom, but if you look at just charts, for example, like [the iShares Russell 2000 ETF (IWM)] versus S&P, you see that really, we've been in a giant range over the last six months and we're up to near the highs of this range, so, [it's] very difficult to make any claims of any sort of breakout, per se," he said.

Citing a five-year chart, Newton pointed to the small-cap-to-S&P ratio's extended downtrend, saying its rally up to that long-term trend line "would be really enticing to try to sell into." 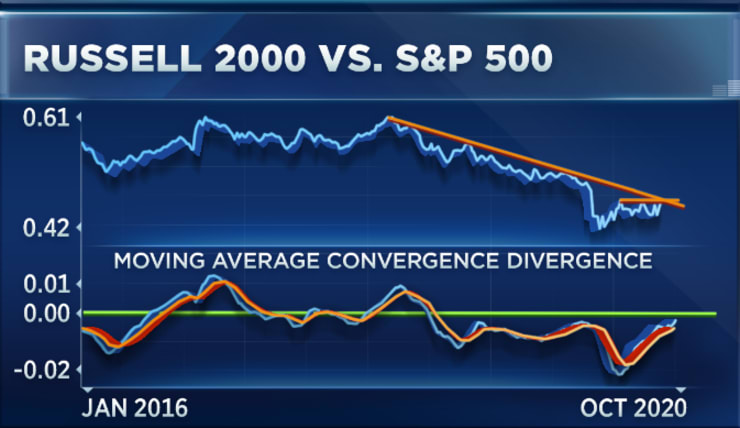 The small-cap-to-S&P ratio has fallen to its lowest level in nearly two decades, indicating notable weakness in the small caps that could be an opportunity for investors, Newton said. 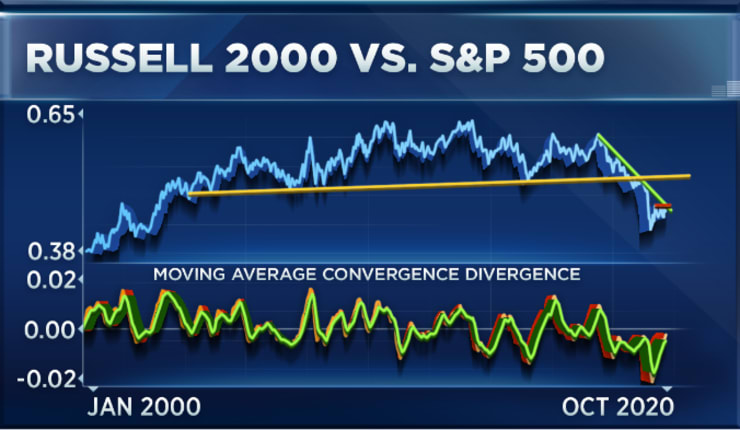 "In general, it's been a huge amount of outperformance that recently just started in the large cap versus small cap arena," he said. "We've seen a little bit of a bounce."

Lastly, Newton noted that the IWM peaked over two years ago and has been unable to break to new highs ever since.

"Even the most recent rally into January, February peaked out and failed to break out to new all-time high territory. Now we're trying again. My thinking is it's going to fail this time. I would look at selling into IWM right near 165 to 170," he said.

"I do like health care as a group relatively speaking, but I don't necessarily like financials or industrials nearly as much," Newton added. "I think transports are going to be a big downward leg and really should start to roll over in the weeks to come. So I'm not nearly as optimistic about the small-cap trade and I much prefer large cap."

A deal for further stimulus could become a major tailwind for small caps, however, Petrides said.

"I think the market is warming up to the fact that I do believe that a stimulus package will get passed before the election," Petrides said.

"For small caps to rally, you really needed the Fed to provide as much credit as it has [been]," he said. "So I think we need a stimulus package to be passed, and once that is passed - I'm confident that it'll get passed - Wall Street doesn't have much patience for D.C. and when D.C. realizes that, they'll come to the table and get something done and they're going to do it before election. I think you'll see small caps rally into that."

The Russell 2000 and IWM each closed about 1% higher on Thursday.