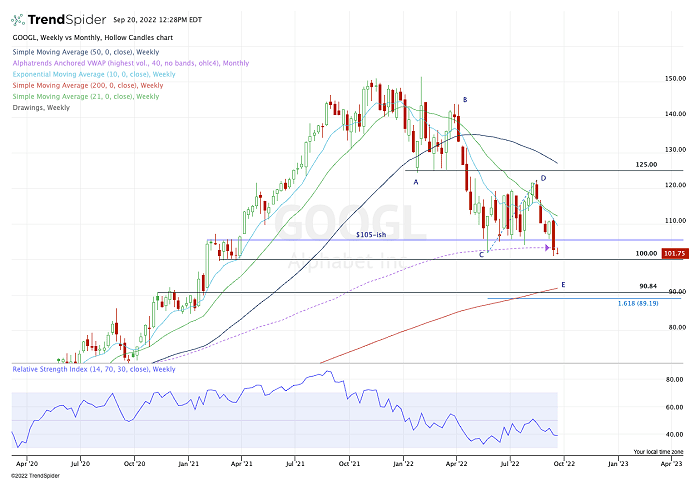 -- Alphabet stock has fallen more than 30% only three times in the past 12 years. Now is one of those times. Let's look at support. --

It's been a rough run in tech, as companies big and small continue to struggle. The latest selling pressure has even hit the FAANG stocks.

At one point, Alphabet (GOOGL) (GOOG), Apple (AAPL) and Microsoft (MSFT) were the cream of the crop. The three stocks were holding up better than almost any other tech stock and they had the balance sheets to back up the performances.

Fast forward a couple of months, and only Apple is left.

Microsoft and Alphabet are now making new lows. So are Meta (META) and Nvidia (NVDA).

We looked at Nvidia yesterday, so now let's look at Alphabet.

Alphabet, Google's parent, has strong cash flow, a robust balance sheet - with $125 billion in cash and short-term investments - and stellar assets in Google.com and YouTube.com, among others.

Quite frankly, the stock is on sale. The shares are down 33% from the all-time high made in February. For comparison, Alphabet stock fell 34% during the panic selling of covid-19.

Purely from a historical peak-to-trough price-action perspective, this gives a pretty good sense of the action we're seeing now. It may also lend a bit of confidence to leery investors.

Now that $105 is failing as support - as is the monthly VWAP measure - it will be interesting to see whether Alphabet stock finds support at the $100 mark. This area is the first real area of support I'm focusing on.