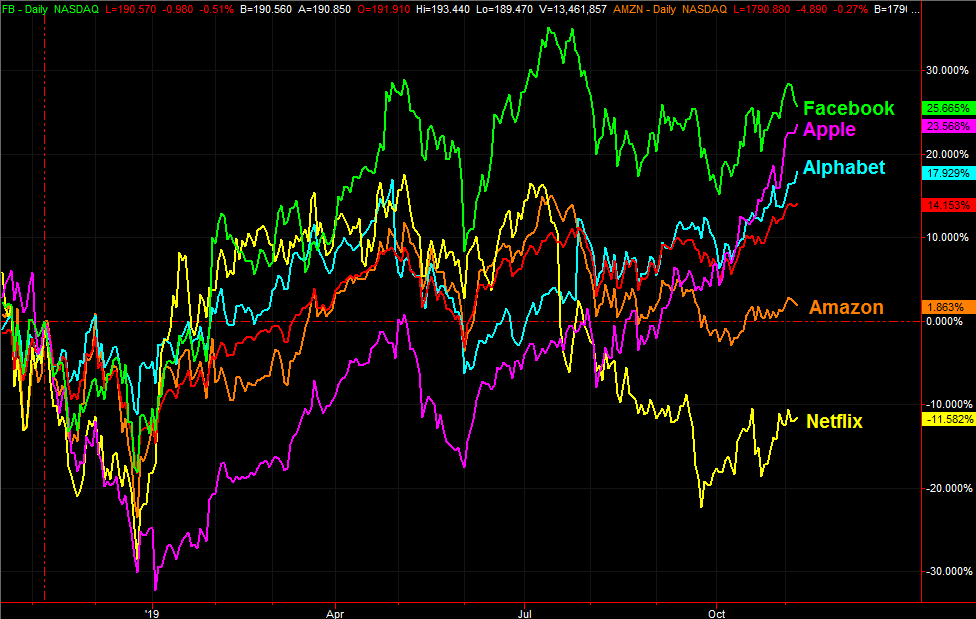 How does the old saying go? Nothing last forever? That's certainly been true among the so-called FANG stocks of late. Apple (AAPL), which could do little to help itself just a few months ago, has been on a tear. Meanwhile, market-darling Amazon (AMZN) continues to fall out of favor. It's not quite in the same trouble Netflix (NFLX) found itself in just a few weeks back, but it wouldn't take much to reach that point.

The graphic below tells (most of) the tale. Apple has been unstoppable since August as investors once again see a light at the end of the tunnel. Demand for the iPhone isn't drying up quite as much as feared, while the transition toward more services-based revenue is going better than expected. A little more bullishness and AAPL could become the twelve-month performance leader, aping Facebook (FB).

At the other end of the spectrum, Netflix is still the twelve-month laggard, but at least it's showing signs of life. Amazon shares have proven a relatively easy target, mostly thanks to last quarter's earnings report that says free one-day shipping hasn't exactly paid for itself.

As is always the case, however, a performance comparison doesn't tell the whole story. Each chart of each FANG name demonstrates its own noteworthy nuances. For instance, Alphabet (GOOGL) shares just pushed above a major horizontal ceiling at $1297 on Thursday. It hints at a breakout, though in this case could be a fakeout. Shares peeled back from the high rather than cleanly pushing past that resistance. The raw strength of the Apple rally is also even clearer on this graphic.

Once again though, it's Amazon that merits the closest look because it's the closest to a major move... lower. There are intersecting support lines right around $1680. A break below that floor could prove problematic. That's not the only thing "wrong" with Amazon right now, however. As the more detailed daily chart of AMZN below illustrates, the 200-day moving average line (plotted in dark green) appears to be acting as a technical ceiling here. It's an important detail, even if Amazon still has to log that first lower low to slip all the way into trouble. 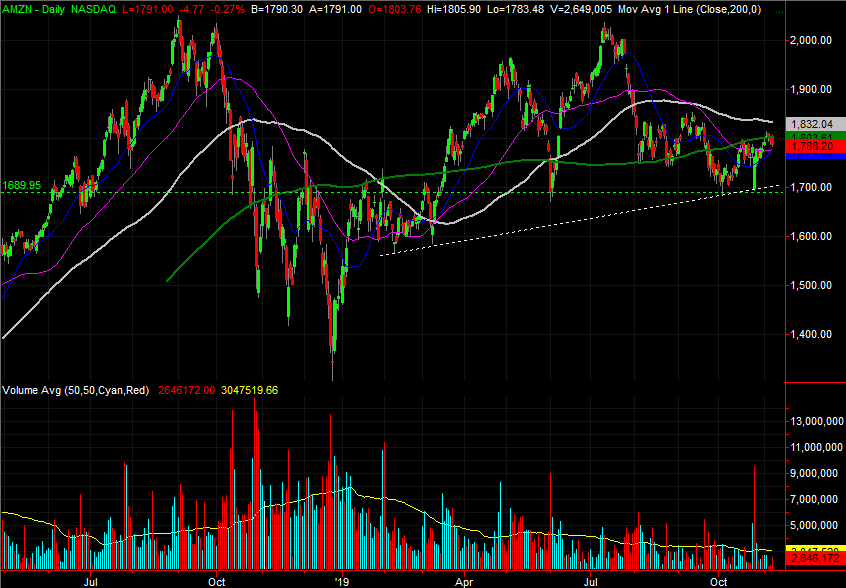 It's the detailed daily chart of Facebook, however, that may deserve the closest look. It's not below its 200-day moving average line, but appears to be inching in that direction. It's going to be at least a few more days before that could even happen, but last week's lower high is a red flag. On the other hand, there's a wide swatch of support from several moving average lines that the bears would have to plow through before this chart got really, really interesting. 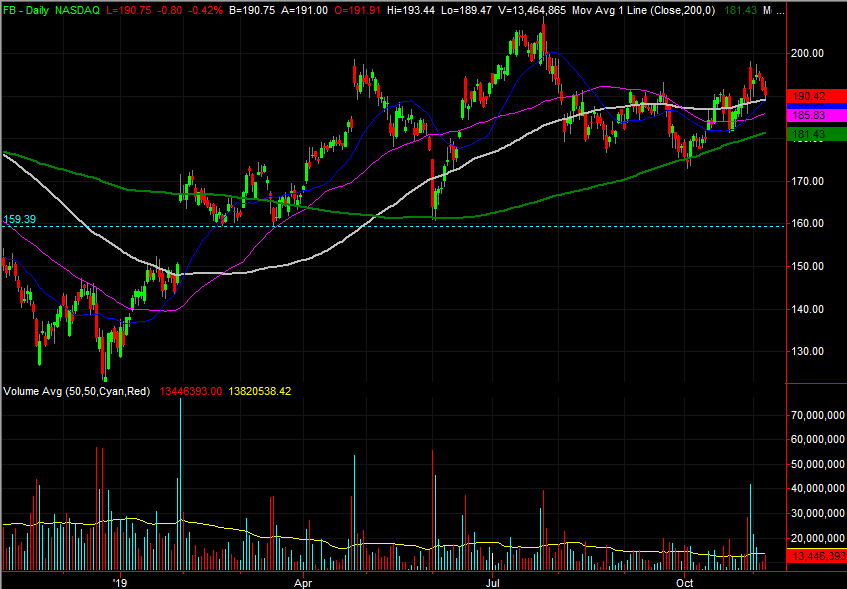 Most traders are surprised to see that FANG stocks don't move as a herd, let alone can move in opposite directions for extended periods of time. They're supposed to be the "best of" consumer tech, but they're performances are amazingly inconsistent.

There's opportunity in that inconsistency though. The tricks is being able to spot when one of the FANG names is about to break away from the herd, or rejoin it. That's what the BigTrends FANG Options Advisory does, employing tailor-made tools to take advantage of each of these stocks' quirks and tendencies. The service also uses options to leverage the action from the names that are the market's biggest movers to begin with.

If you'd like to learn how to get more out of the market by narrowing your trading universe, go here to read more about the BigTrends FANG stocks trading newsletter: https://www.bigtrends.com/products/fang-options-trader-advisory-service/