Buy the Dip in Apple? Here's the Trade 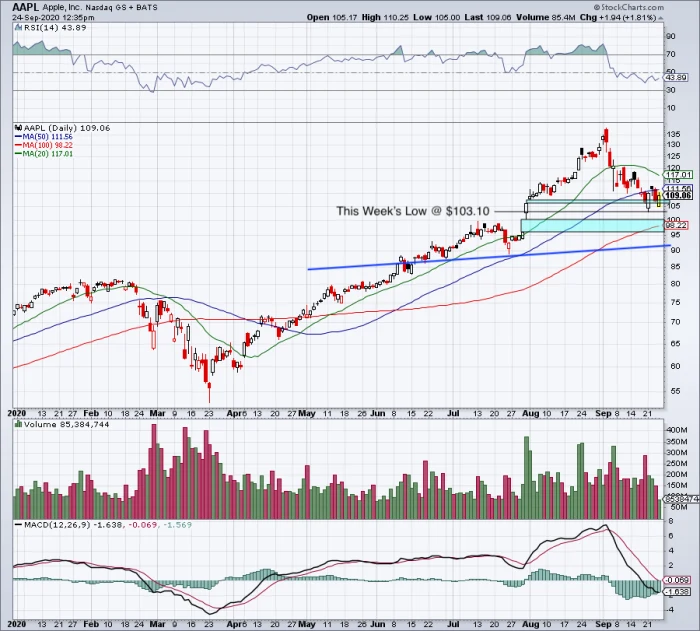 - Apple stock is rebounding from the recent low. From peak to trough, the shares are down 25%. Here's how the charts set up now. -

Apple  (AAPL) has been in focus in recent trading, as the shares have been faltering. In fact, most of big tech has been in focus as Amazon  (AMZN), Alphabet  (GOOGL) and others try to find their balance amid the selloff.

The big-tech group - known commonly as FAANG - has been a major market driver since the pandemic lows were hit in March.

If Apple and its peers can't bottom out and begin to regroup, the overall market will likely have trouble hitting a low, too.

For better or worse, a handful of tech stocks drive the stock market, particularly the Nasdaq.

The reasoning goes beyond sentiment and has more to do with market cap. Simply put, these names command far too big of a weighting to not move the market.

In the second quarter and coming into September, that was a major benefit for the market. Over the past few weeks, it's been more of a liability.

Of that group, Apple is a major component, and investors are wondering when - and more specifically where - the Cupertino, Calif., tech giant is going to bottom. Let's look at the charts.

For whatever reason, investors and traders went bananas over Apple's stock split. While management made the announcement with its quarterly earnings report (which was solid), I don't know that it called for a 35% one-month rally.

But that's what we got, as Apple tacked on about $550 billion to its market cap. Now we have a stock-split hangover.

If Apple didn't have such solid fundamentals, this price action would be more concerning.

Thus far, the 50-day moving average has been resistance on the rallies, as Apple has now filled the first of its two post-earnings gaps, the most recent of which was near $106.

Now the bulls are in a tough spot. The latest dip did not retest Monday's low (at $103.10). Reversing higher now, Apple must reclaim the 50-day moving average to be a trustworthy trade - an investment is a different story.

If the 50-day continues as resistance, this week's low remains suspect.

Ideally, I would love to see Apple crack below $100 and test down into the 100-day moving average. Even more ideal would be for it to fill that second post-earnings gap near $96.

If we do that, then Apple stock will look a lot more attractive for those looking to buy.

The current peak-to-trough decline sits at 25% and if the stock can reclaim the 50-day moving average, then momentum traders have a solid setup. At $96, it's the dip buyers that get a better setup.

It's all about staying flexible and playing the hand we're dealt. Either Apple can build up strength and reclaim a key area or it risks more downside.