Weekly Market Outlook - With a Bottom in Sight, Friday Ruined Everything

The market was almost palatable for a change last week... in the middle of it anyway. Monday's 12% rout and Friday's 4.3% drubbing crushed Tuesday's, Wednesday's and Thursday's glimmers of hope, translating into a 14.7% slide for the five-day stretch. As it turns out, that was the worst week for stocks since October of 2008, as well as a record-breaker. The previous record was held by, not surprisingly, that fateful week in early October of 2008. (That was a an 18.2% rout for the S&P 500 back in 2008, which was bigger. But, most of the record books use the Dow as the yardstick. So....)

Too much, too fast? Maybe, but it was "too much" and "too fast" two and four weeks ago, but that didn't stop the rout. Never say never.

Still, this has gotten nuts. Traders have priced in a prolonged recession that may or may not materialize, and may not last long if it does. The whole world is looking to prop the economy up.

All things considered, last week's economic news wasn't terrifying. On the other hand, the coronavirus hadn't taken full hold by the time last week's numbers started to be compiled.

Still, we're entering the storm with about as much health as anyone could hope for.

The good news: Last month's usage of factories was up, about as much as expected. Capacity utilization came in at 77.0%, up from 76.6%, and industrial production grew the expected 0.6%, reversing the 0.5% decline seen in January. Again, that was before COVID-19 fully took over, but the response to the contagion is somewhat beneficial -- economically -- in itself. 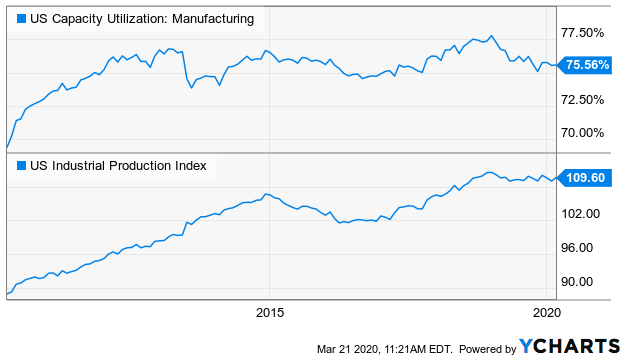 Factories may have been busy enough, but consumers were already starting to feel the fear in February. Retail sales were expected to grow 0.1% with or without cars, but they actually fell 0.5% last month. Don't overreaact though. On a year-over-year basis, spending was up 4.2% last month. 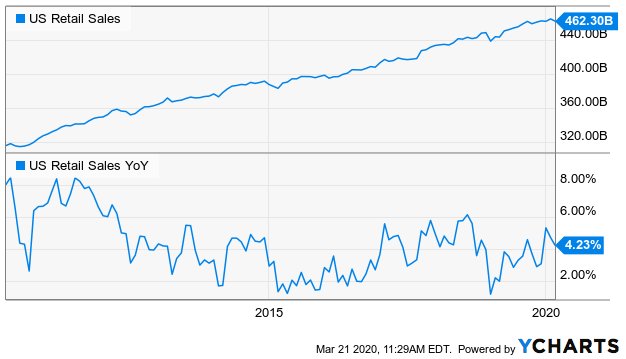 Retail spending may or may not crater in March. Again, people may be at home, but they're buying cleaning supplies and online entertainment in droves.

The coronavirus outbreak wasn't too problematic last month, with building permits and housing starts only slipping a little. On the other hand, mortgage rates were near historic lows in February, and that didn't help much. 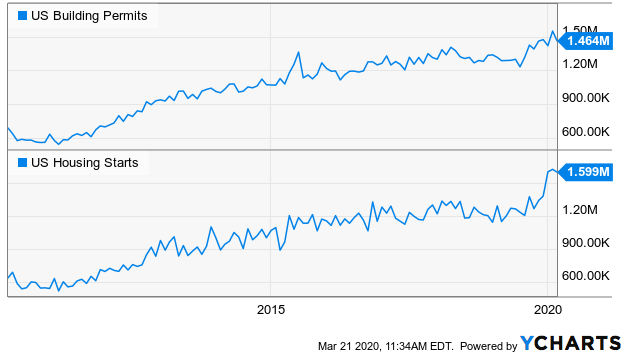 Or, maybe low interest rates did help. February's existing home sales pace hit 5.77 million units... a multi-year high that blew past expectations. We'll get new home sales this week, which will either confirm or question the surge. 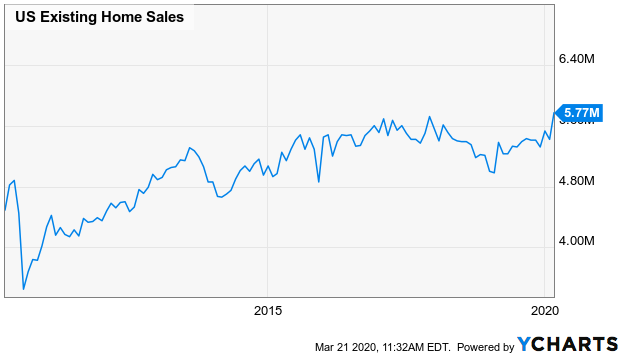 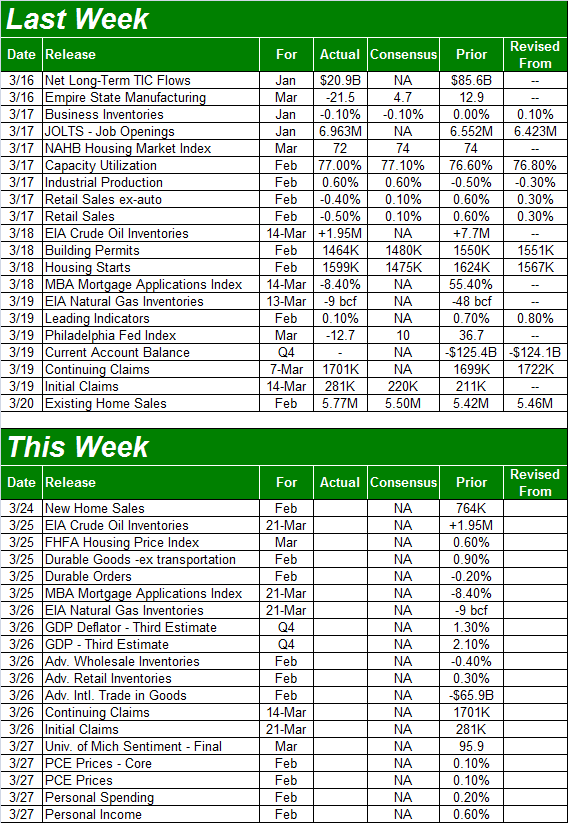 You'll notice there are no estimates for this week's data. That's not an omission. The coronavirus has simply stopped them from being published. Still, the data itself should still be published, so we'll still preview the big ones...

... a party that starts with the FHFA's Housing Price Index. We can't get the numbers right now, but it closely follows the Case-Shiller Index, which indicates values continue to rise despite the headwind. 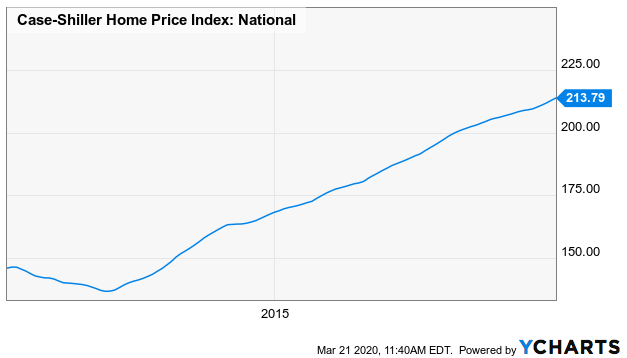 Also this week we'll hear the third and final estimates of Q4's GDP growth rate, though it's mostly irrelevant at this point. Aside from the fact that Q1 is almost over and the data is old, the COVID-19-related shutdowns have changed everything in the meantime. For what it's worth though, that number's still apt to be 2.1%.

This week will also give us the third and last look at the Michigan Sentiment Index -- what will likely be a disastrous figure -- and last month's personal spending and personal income data. Again, consumers had yet to lose their minds in February. That's all happened in March.

Just a preface: All bets are off. There's nothing about the market's or the charts' recent history that means anything right now. That's not a permanent condition. As insurmountable as the fallout from the COVID-2019 outbreak seems right now, capitalism finds a way. For better or worse, greed works. We'll find a bottom. The only questions are, when and where? That's when charts will start to matter again, and the market will have to pick up wherever it leaves off.

It's point to make at this time -- headed into Monday -- because futures are down again.... big-time. Another circuit breaker is apt to kick in today.

Still, let's look at where we are, on the chance things start to drift back to normal this week.

Take a look at the daily chart. We were seeing hints of a bottom in the middle of the week, as evidenced by opens and closes near the highs for those days, and well off the lows. The bulls were testing the waters. Then Friday. Stocks got slammed to close at the lowest close since early 2017. There's no previous low now acting as a support line in sight. 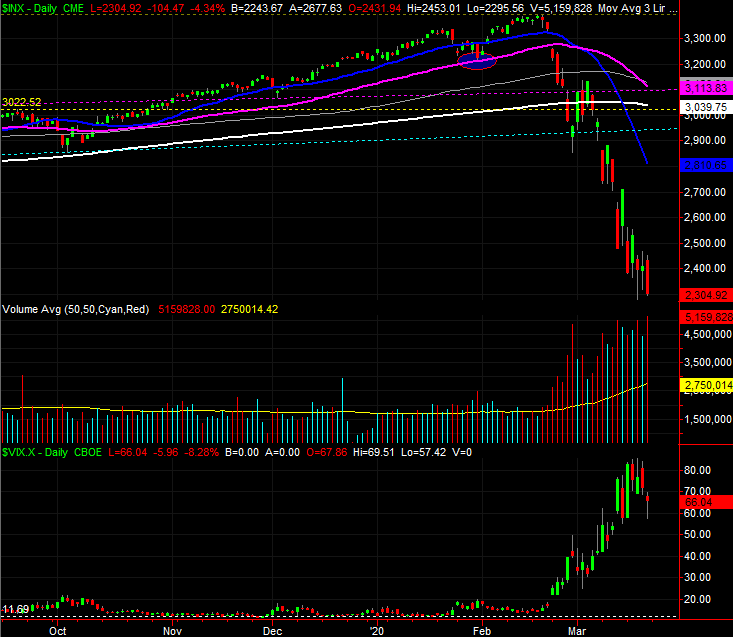 Now take a closer look at the lower portions of the daily chart. For the market to be hitting multi-month lows, volume wasn't all that wild. It was above average, but not crazy... particularly given that it was an expiration Friday. Also notice the VIX, or fear gauge, was coming down off its recent multi-year highs.

Maybe it's nothing. Or, maybe it's a hint that the worst-case scenario is truly priced in (or close to it).

Something else along those lines... 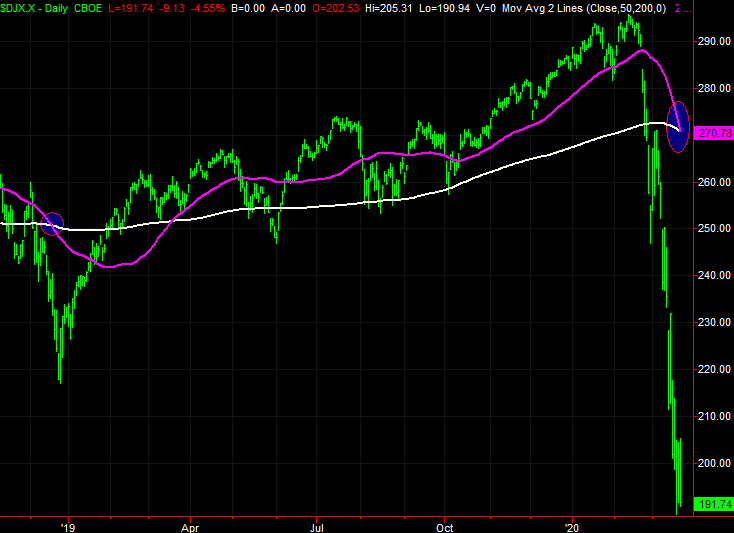 It's supposed to portend more weakness, suggesting the momentum has turned fully bearish in multiple timeframes. It's a somewhat flawed idea though, for a couple of reasons.

Chief among those problems is, we also so a death cross back on December 19th of 2018. The big low literally took shape five days later, December 24th, when investors realized they overshot. We saw another one in mid-January of 2016.... on the same day as the major bottom. The one before that was August 11th of 2015. Stocks hit a scary low on the 24th, before a 15% rebound that took less than two months. The ones from mid-2011 and mid-2010 were also incredible buying opportunities.

Could this time be different? Sure. We also saw a death cross for the Dow at the beginning of 2008, and stocks took a beating for the rest of that year. We're just saying, from an odds-making perspective, a death cross is far more often buying opportunity than a selling one. This implosion would have to turn into a recession for this one to be like the 2008 instance and different than the five that happened between then and now.

As for the NASDAQ, same story. That is, a rout, but a rout that's been so harsh it's become almost unrealistic... and difficult to believe will last. Also notice the selling volume behind the NASDAQ's decline has been above average, but not decidedly devastating. 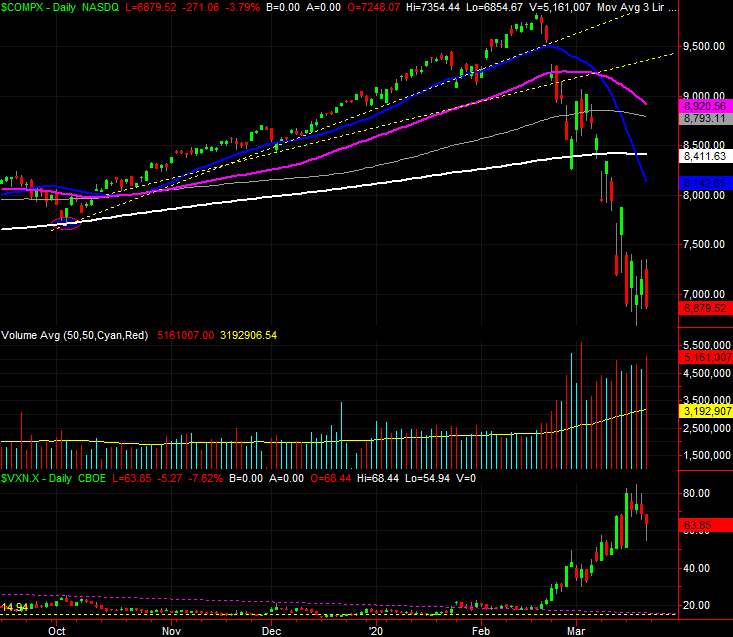 The most noteworthy development for the NASDAQ, however, is evident on a zoomed out -- way out -- weekly chart. It's from a distance we can see it's not yet fallen all the way back to its 38.2% Fibonacci retracement level at 6528.50. It's close, but not quite there yet. Also notice the support line plotted in light blue, and dashed, that extends back to the 2009 and the beginning of the bull market has yet to be visited. It's rising pretty fast though, and may be what's needed to finally bring an end to the meltdown. 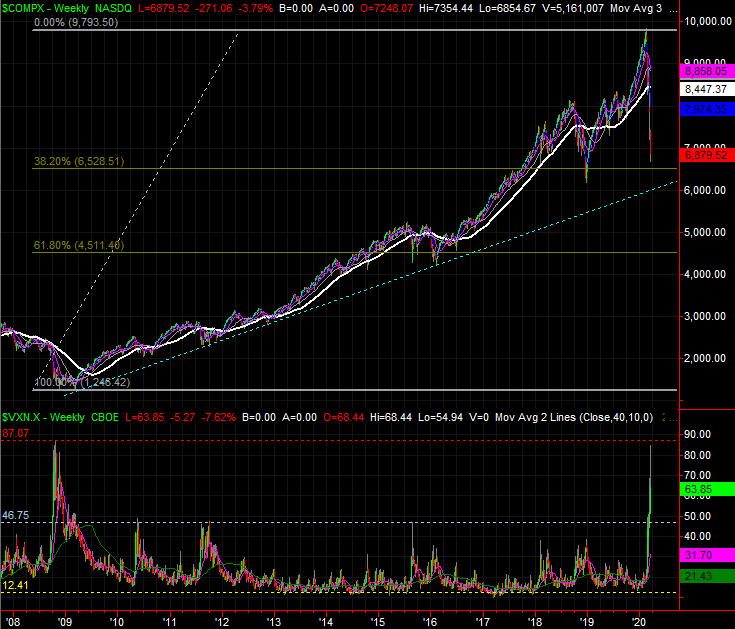 Those two prospects aren't necessarily in conflict. Making a bottom may be more of a process than a single even that results in a "V" shaped chart. The market could bounce around and just drift sideways for a while, giving the bull market's rising floor a chance to catch up and spur a well-grounded recovery rally.

Either way, notice the VXN has essentially reached the peak that signaled the bottom back in 2009 (red, dashed). That's another bullish argument, as long as worse COVID-19 news doesn't take shape in the near future.