Weekly Market Outlook - Too Good for Our Own Good? 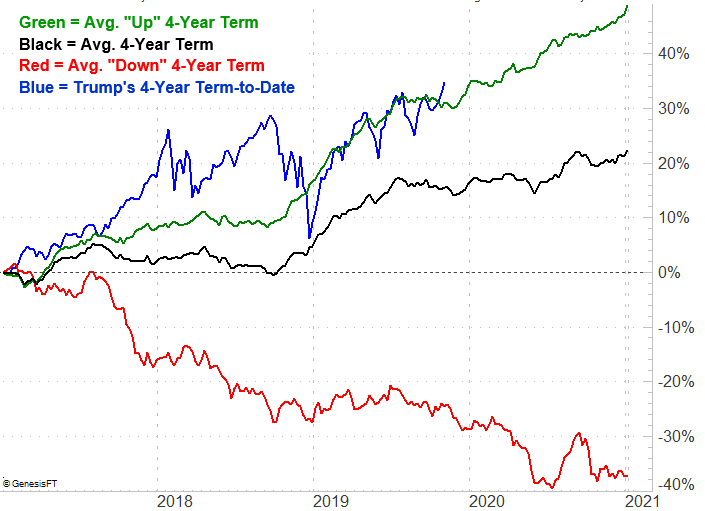 Stocks started last week on the right foot, and ended it even more bullishly. All told, the S&P 500 ended the week with its best daily move of the five-day stretch, rallying 0.97% on Friday to cap off what ended up being a 1.46% romp from the previous Friday's last trade. Even Monday's opening gap ended up being filled in before the market soared on Friday in response to an impressive jobs report.

There are still potential problems ahead. Namely, the market is overbought, and some would say is overvalued. It's also bumping into pretty well established technical resistance at a time of year we should be peeling back just a little... to set up the usual year-end bullishness. We'll see if that's the shape of things to come this time around.

The week was loaded; we'll only hit the highlights.

The party started on Tuesday with the S&P Case-Shiller index. For August, home values fell... for the second time in years. The first time was in July. They were still up year-over-year, but the retreat underscores a slowdown that's been brewing for some time. The August report for the FHFA Home Price Index is still trending higher, but is also slowing. 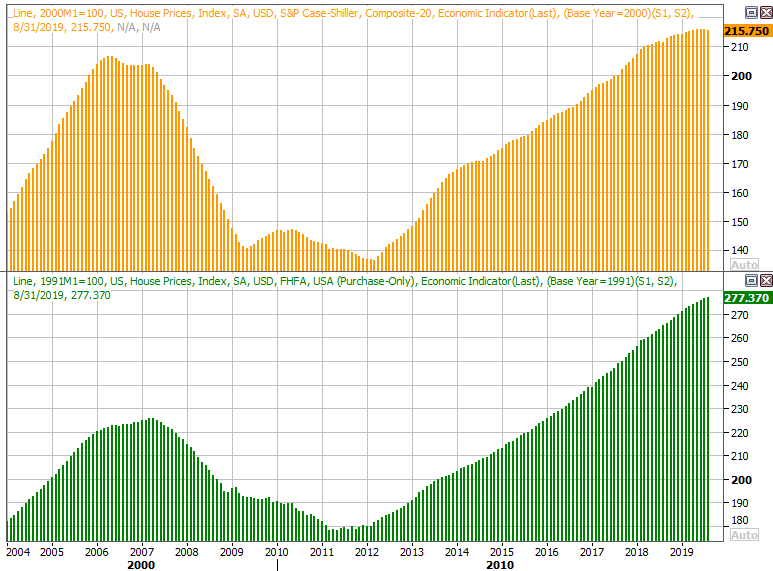 October's home sales data will shed much more light on the home price data, though purchase activity has been wobbly as well.

On Wednesday we got the first look at Q3's GDP growth rate... an estimate, but usually a good one. The growth pace of 1.9% was much stronger than expected, perhaps making the FOMC's decision to cut interest rates by another quarter-point a little questionable. Regardless, the economy appears to be holding up a little better than expected. 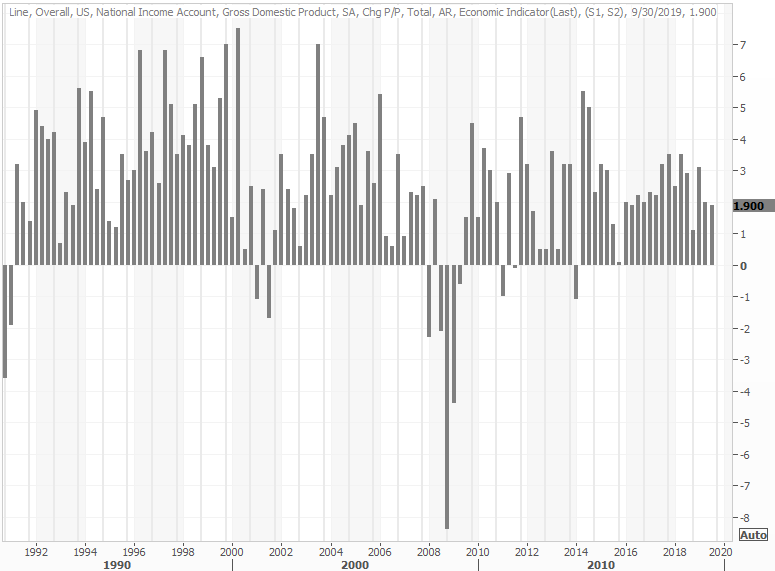 On Thursday we heard about October's auto sales. Not bad. The annualized pace of 17.76 million is more or less where it's been since 2015, but contrary to most expectations, it's not tapering off. 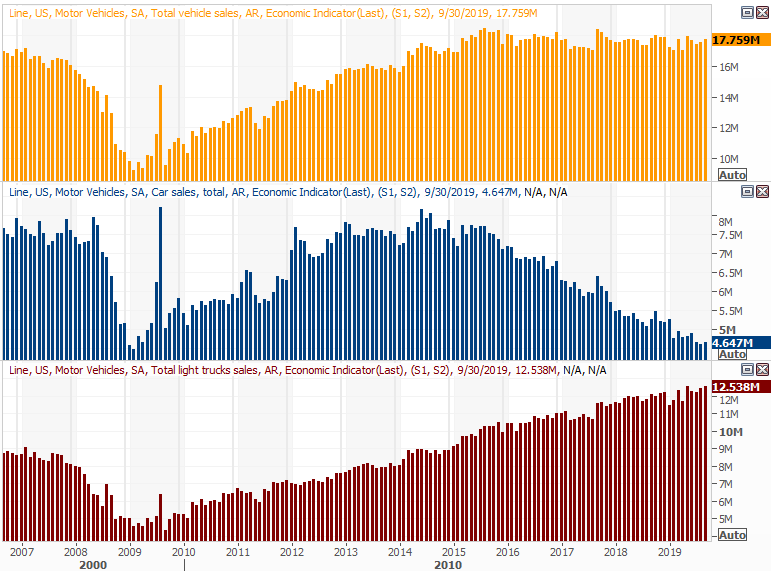 The Big Kahuna from last week, of course, was last month's jobs report from Friday. We took a detailed look at the website (right here: https://www.bigtrends.com/education/markets/october-jobs-report-another-big-win-for-the-economy-market). But, even just a cursory look makes clear there's a lot to like. Although the unemployment rate ticked higher from 3.5% to 3.6%, payroll growth of 128,000 jobs was much better than the forecasted 80,000. The DOL also upped its previous payroll growth figures by 95,000. 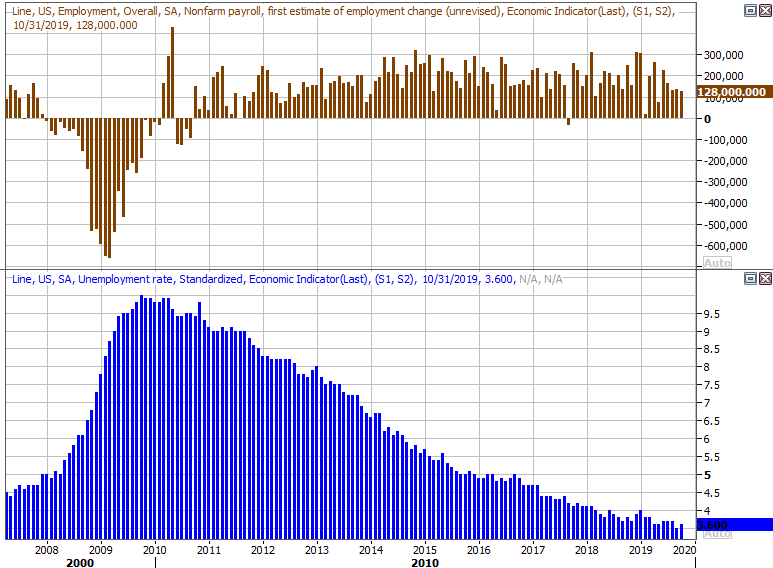 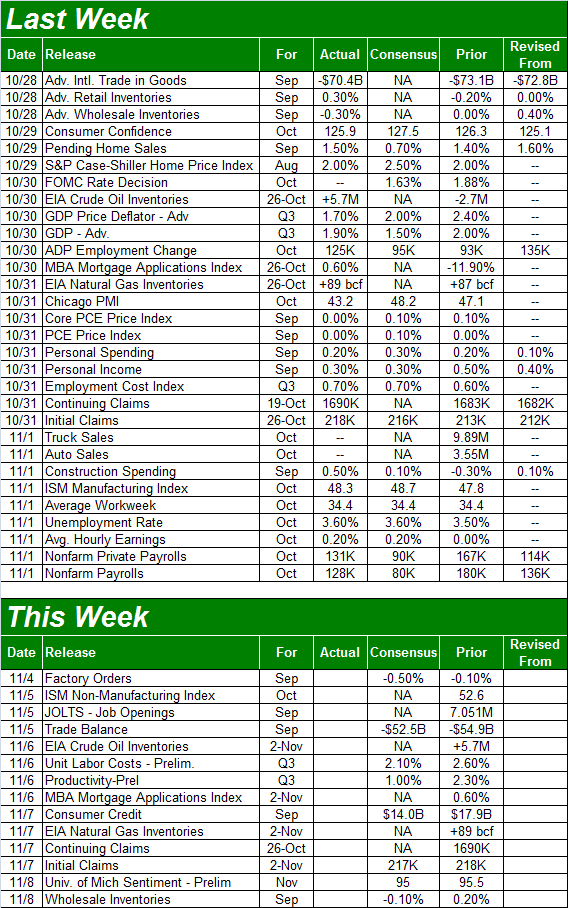 This week won't be nearly as busy. In fact, there's only one item we're particularly interested in. That's Tuesday's look at the ISM Services Index. We got October's ISM Manufacturing Index last week. It came in at 48.3, up from September's 47.8, but falling short of estimates for 48.7. The pros are calling for the services reading to rise from September's print of 52.6. 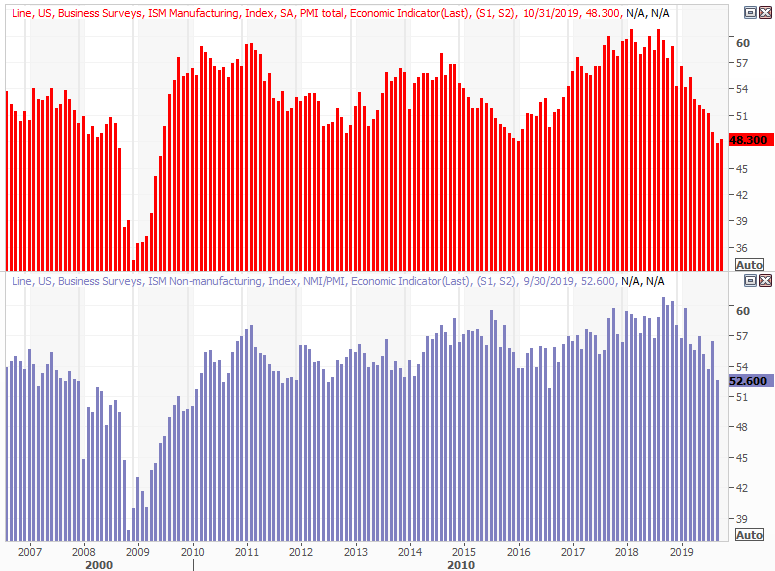 Both measures could clearly use some help, though bear in mind the ISM indices are surveys rather than measures based on raw data. It's possible that perceptions are putting more pressure on the readings than is actually merited.

It's almost too good to be true... which is the problem. Both the indices blasted past horizontal ceilings, and in the case of the S&P 500, it also pushed past a rising technical resistance line that extends all the way back to the early 2018 peak (plotted as a purple dashed line). The volume behind the advance was progressively bullish too. This is, by definition, a breakout. 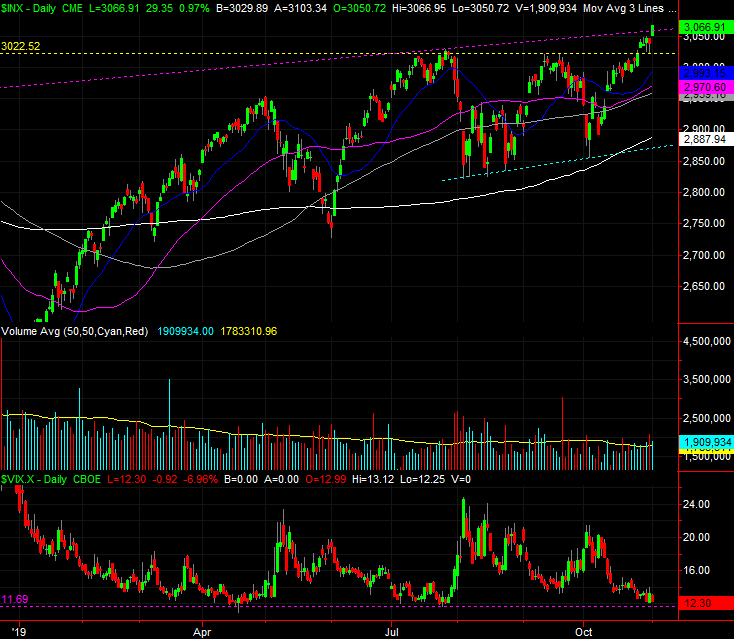 The breakout thrust is materializing at a distinct disadvantage though. That is, the index is up 30% from December's low, and is up 7% in just the past five weeks. It's not technically overbought as measured by the weekly chart's RSI line, but it's as close to being overbought as it was in May and July... right before a couple of noteworthy selloffs. 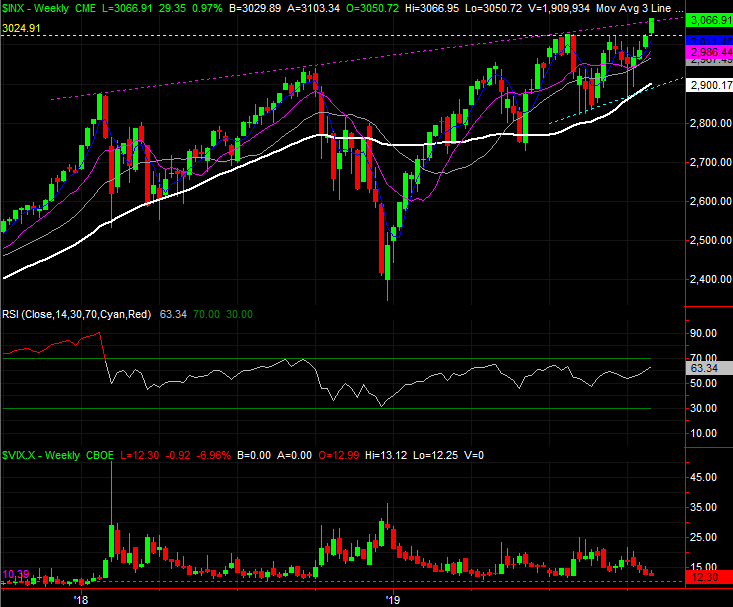 Also notice on the weekly chart that the resistance line (purple, dashed) that capped the index in January of 2018 September of last year and July of last year wasn't able to do the job again last week. [The weekly chart of the S&P 500 also shows how close the VIX is to an absolute low.]

The same can't be said of the NASDAQ Composite's weekly chart. It tested its overarching technical ceiling, but didn't push above it. The momentum here looks solid, but it looked solid in June/July and all throughout the first quarter as well. Both instances ended in a pullback. 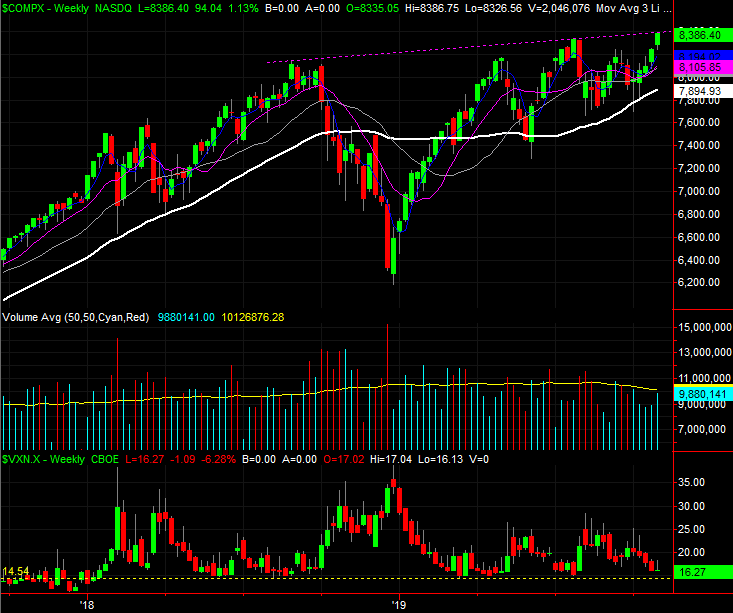 A zoom-in of the daily chart, for perspective... 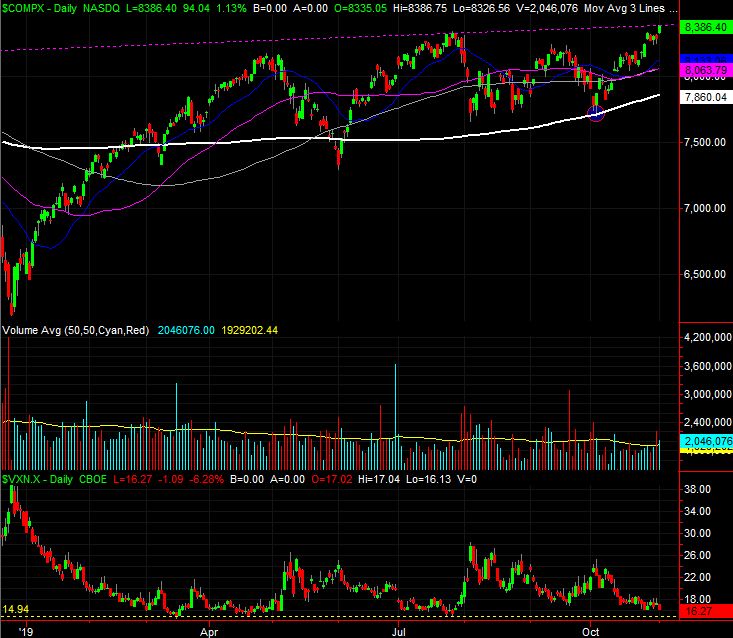 This recent strength has thoroughly up-ended the market's usual calendar-based day-by-day progress. The market should have been tepid through October moving into the typical November/December bullishness. In fact, the market should have moved sideways since May. It's up since May, and even up since August when it should be down. In fact, it's uncomfortably ahead of its usual pace. 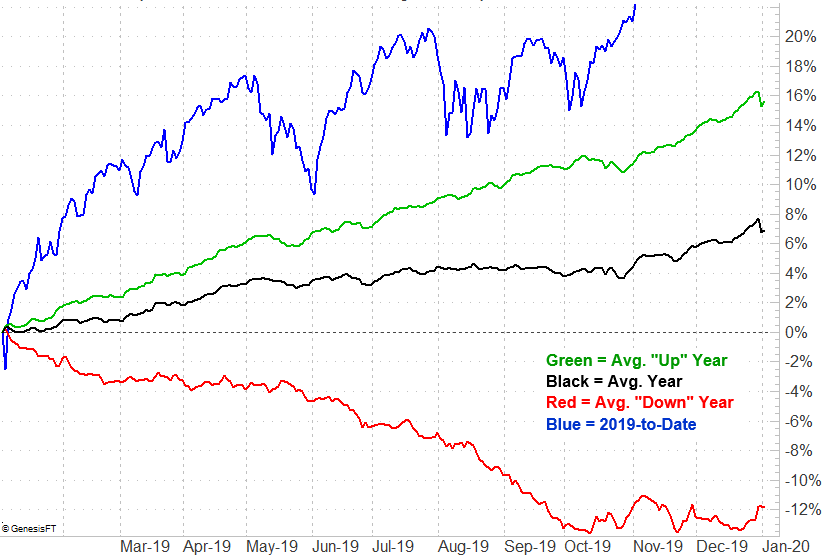 That's even more the case if you're a believer that the presidential term cycle and the subsequent midterm election cycle can make a difference. Stocks should be weak through the latter part of this month (in good years or bad), but the S&P 500 has been unusually bullish of late.

That's not to say the market has to follow its usual course this year. But, if it doesn't, it's a huge bucking of the usual trend. In fact, the S&P 500 has already defied the odds, so to speak. Traders are just that excited.

Two things that could quell that excitement in a hurry, of course, is a setback on the trade war/tariff front, and disappointing earnings reports from the wrong companies.