October Jobs Report Another Big Win for the Economy, Market

The paid pessimists couldn't even come up with the 'problem' they were expecting to find in the October employment report. That's the raw number of positions filled. Analysts were modeling only 85,000 new hires, but 128,000 jobs were accepted last month. Another 95,000 worth of revisions were added to correct understated job growth figures for previous months this year.

That figure thoroughly dashes the misguided argument that job growth is slowing down because the economy is slowing down. Were payroll growth figures slowing down, it would only be because companies were running out of people to hire for open positions. But, that's not the case either way. Last month's 128,000 isn't too far down from the average payroll-growth pace of 167,000 jobs so far this year, and the Job Openings figure from the early October JOLTS report stands at a near record 7.1 million as of August.

The unemployment rate still notched a little higher, from 3.5% to the expected 3.6%. But, that was entirely the function of a swarm of people that hadn't been in the job market now seeking a job. Most of them found one.

The specifics on that front: As of the end of last month, a record-breaking 158.51 million were working in the United States. There are still 5.85 million people officially unemployed (receiving unemployment benefits) as of last month, up a little from September's total, but still near multi-year record lows. And, most noteworthy, the number of people that weren't counted as unemployed but were still looking for a job fell to a multi-year low of 4.75 million. 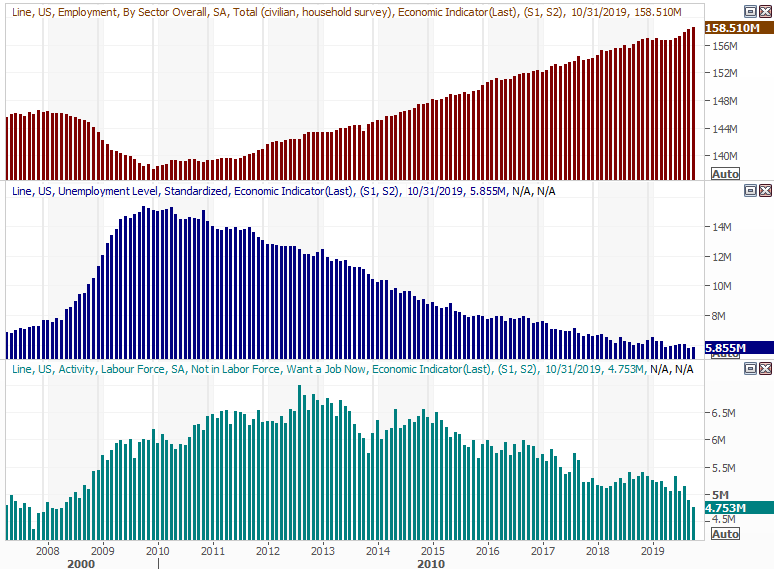 In short, individuals are 'getting off the sidelines,' so to speak, accepting job offers that pay too well to pass up.

Proof of that premise lies in other, less-touted data. Namely, the labor force participation rate. As of October, 63.3% of the country's population considered themselves part of the collective work force, with 96.4% of them working. That's the highest participation rate since 2013, when it was on the way down.  The employed/population ratio of 61.0% didn't budge from September's reading, but that's still tied with the multi-year high hit in September. And, that bigger trend continues to rise as well. 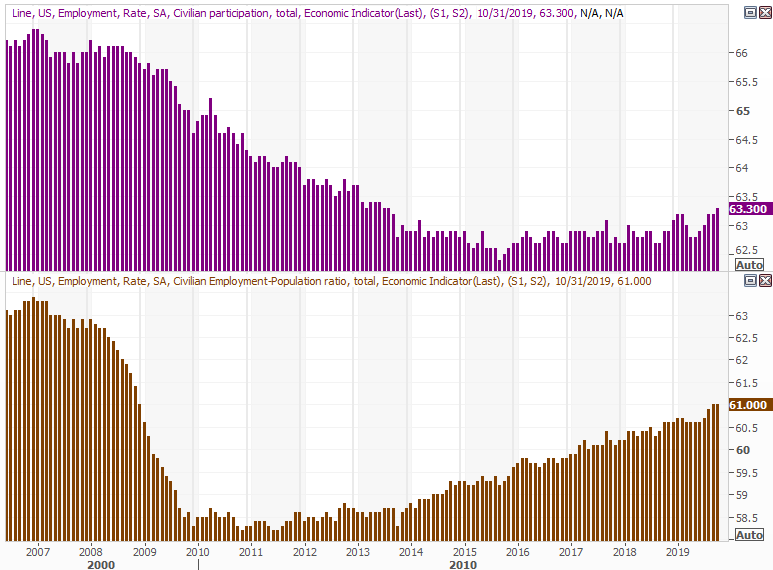 Strength in demand for workers -- and their sheer scarcity -- also lies in how much employers are paying people to come on board, and stay on board. While not yet indicated on the chart below, hourly wages were up 0.1% from September's level, translating into year-over-year growth of 3.0%. That's better than inflation. 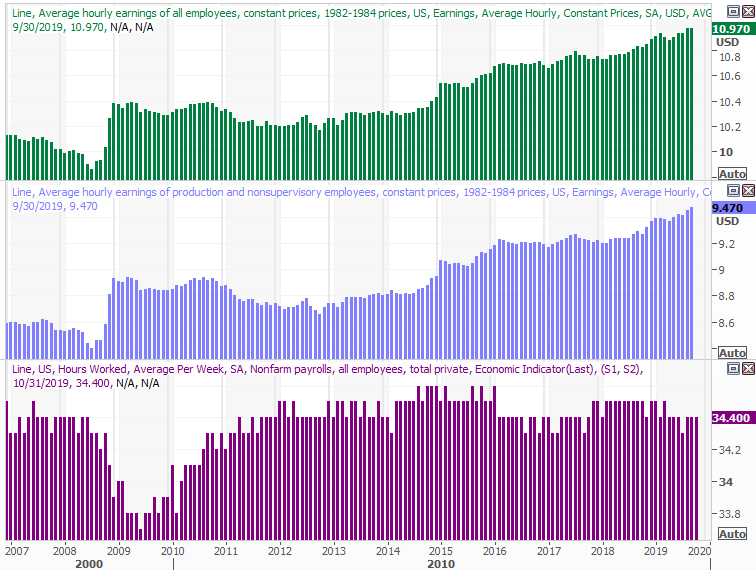 In sum, despite any naysaying, it was another winner. It's the strength of total wages that's buffeting some of the impact of the tariff war with China, in fact, that's allowed the S&P 500's third quarter earnings thus far to come in a little better than expected even if markedly lower on a year-over-year basis. (Materials and energy stocks are the weak spot, by the way.) All told, we'd grade the report with an A-, counting off a couple points for not driving the employed/population ratio at least a little higher. There's little else that could have feasibly been done to make the numbers, in total, better.