Weekly Market Outlook - Every Step Forward is Getting Tougher to Take 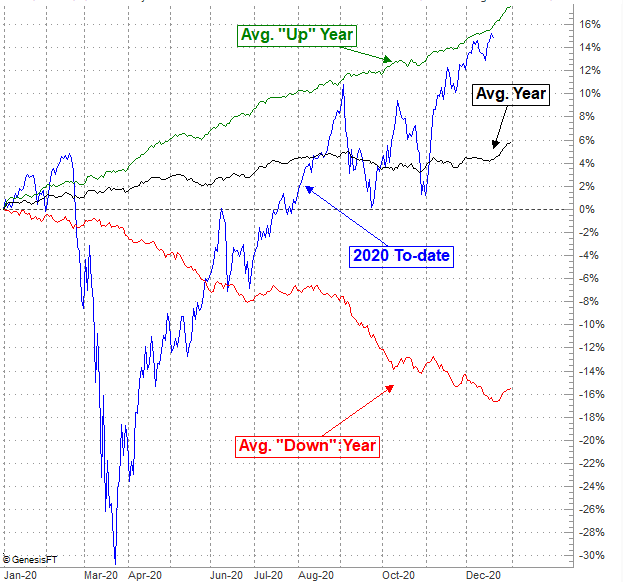 Stocks logged a slight gain last week, reversing the prior week's similarly-slight loss. But, as was cautioned a week ago, it's clear the market's big gains since March -- and even since early November - are weighing things down. It's possible the only thing still pushing stocks upward at this time is the calendar. This is a bullish time of year, and that bullishness tends to last through the first few days of the new year. Of course, this just sets up an even greater potential for profit-taking shortly after that...and it seems like traders are already exercising caution of that possibility.

We'll look at that idea in detail in a moment. First, let's recap last week's big economic announcements and preview what's in the cards for this week.

The list of economic announcements from last week is lengthy, but not all of that news was terribly meaningful. In fact, there are only 3 data sets that were of interest. In order of appearance...

Last month, the nation's factories once again increased their output, and by even more than expected. Utilization of that capacity grew to 73.3%, and production improved by 0.4% compared to October's output. This is still well below their pre-pandemic peak, but importantly, these two numbers have been heading firmly higher since April. The trajectory is the key, as that tends to coincide with the bigger-picture direction of the market. (That doesn't prevent short-term ebbs and flows though.) 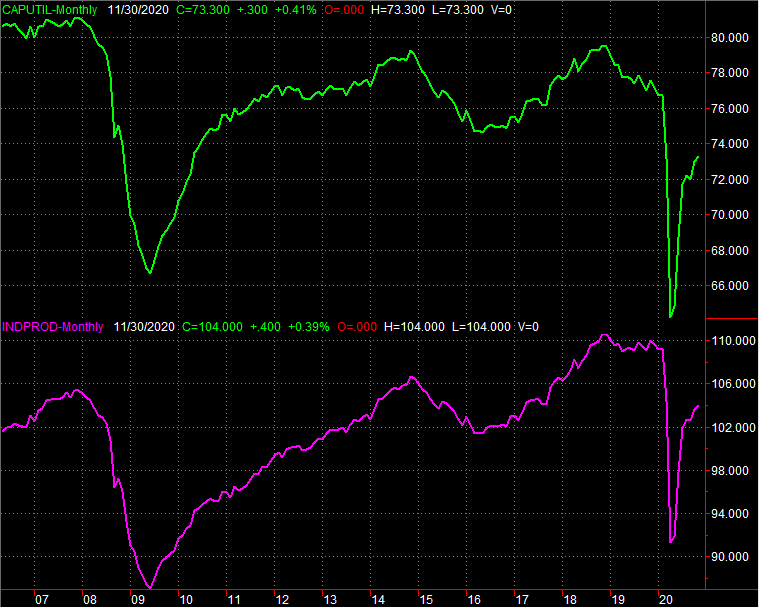 Retail sales, however, could be considered disastrous. They actually fell -- by any means of looking at them - from October's spending levels. They were still above November-2019's levels, and bear in mind that October's consumerism was oddly strong. The bar was set pretty high. Still, this doesn't suggest the holiday season is going to be a particularly great one. Perhaps consumers aren't feeling quite as confident and flush as it's seemed they are. [More on that in a moment.] 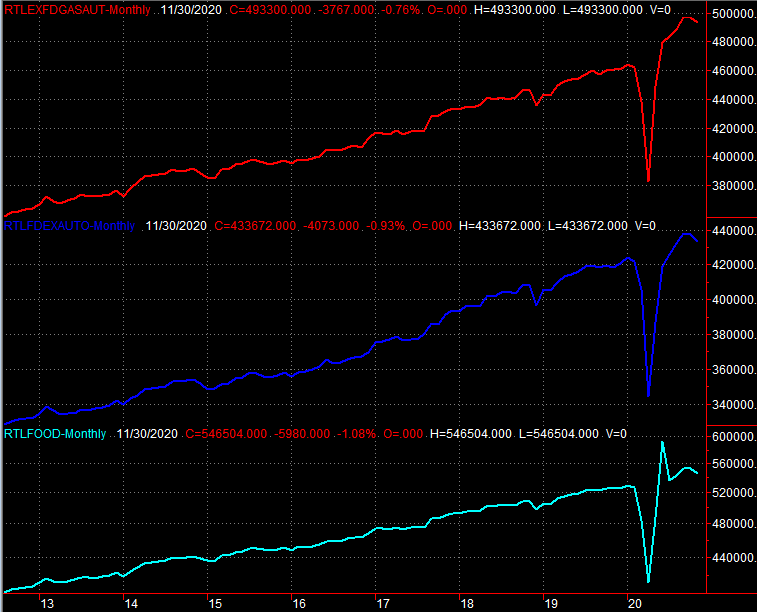 Perhaps those people are saving up and spending that money on houses rather than gifts. Building permits soared (again) to the highest levels since 2006 - when they were on the way up - and housing starts would have done the same were it not for the surge in starts from January of this year when interest rates reached their lowest level in years. [Home-buyers should have waited just a few months, though they still locked in great loan deals.] 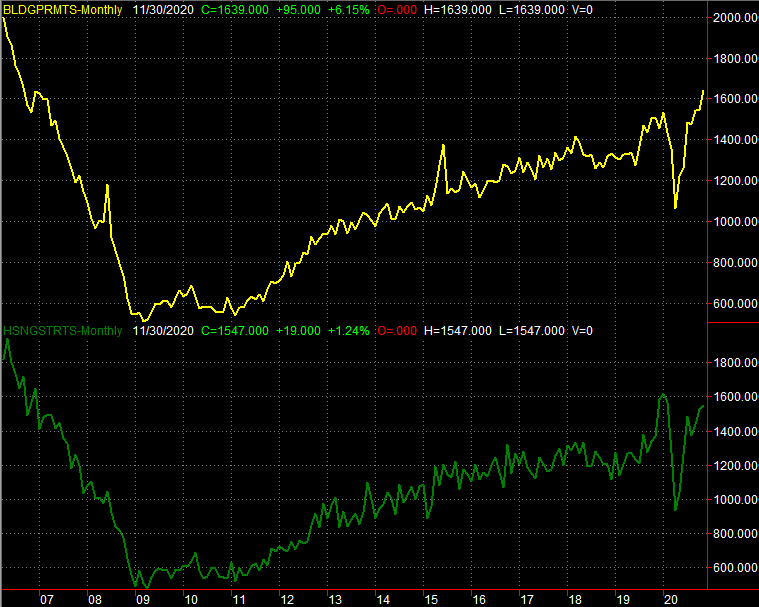 This is clearly encouraging, though don't be surprised if starts and permits cool off a bit in the coming year. This year's pace was blistering hot. A cooldown wouldn't necessarily be an indication of economic contraction though. 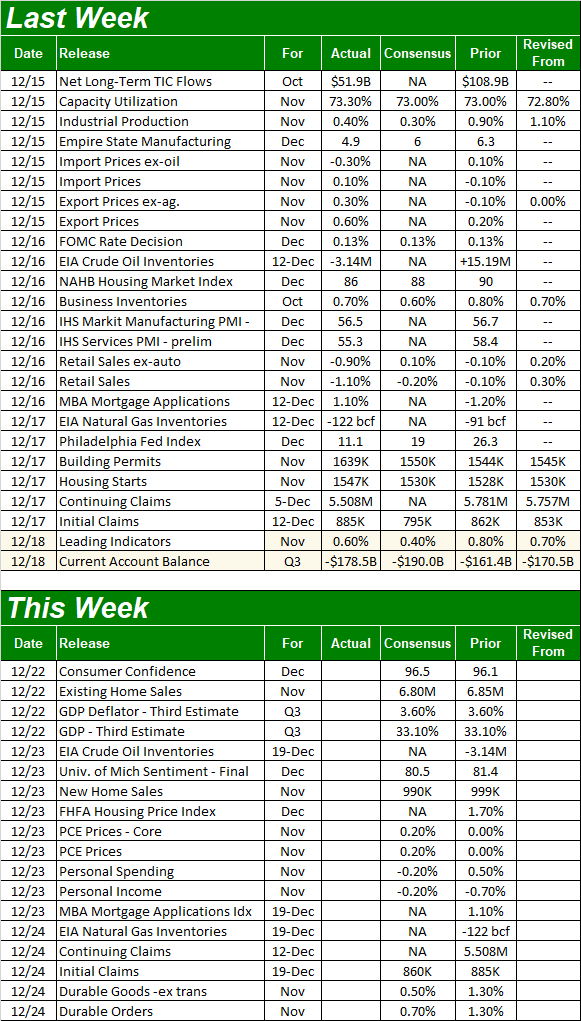 In this week's lineup we'll round out the real estate picture with a look at new and existing home sales, as well as home prices...using the FHFA Housing Price Index as a barometer.

As for home buying, the pace should fall just a bit from October's pace, but only just a bit. And, remember that October's purchasing rate was also unusually high. A slight ebb would be perfectly tolerable. 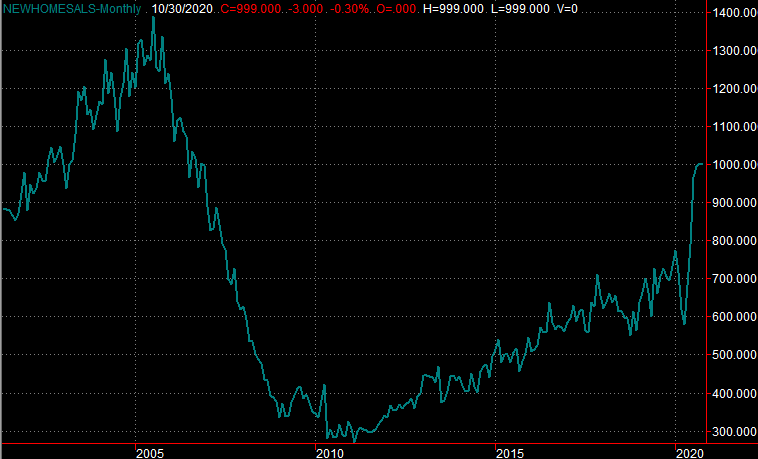 Any lull in purchases won't necessarily translate into a lull in the persistent uptrend we've seen in average home values. [The Case-Shiller Home Price Index won't be updated this week, but it's closely mirrored the FHFA's measure.] 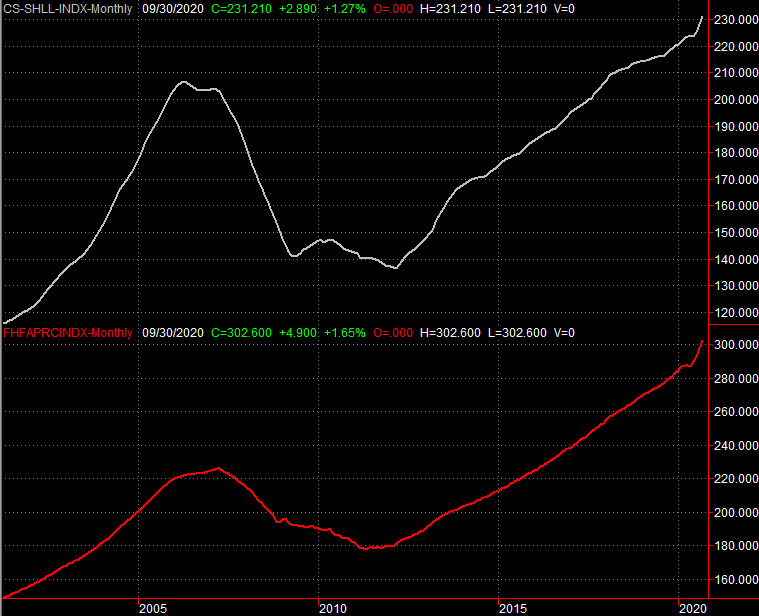 The biggies to watch this week are the Conference Board's consumer confidence data, on Tuesday, and Wednesday's third and final report for the University of Michigan's sentiment measure. The former is expected to rise a bit, while the latter falls just a little. That's pretty disappointing, however, given that both fell quite a bit in November and that both remain well below their pre-COVID levels. 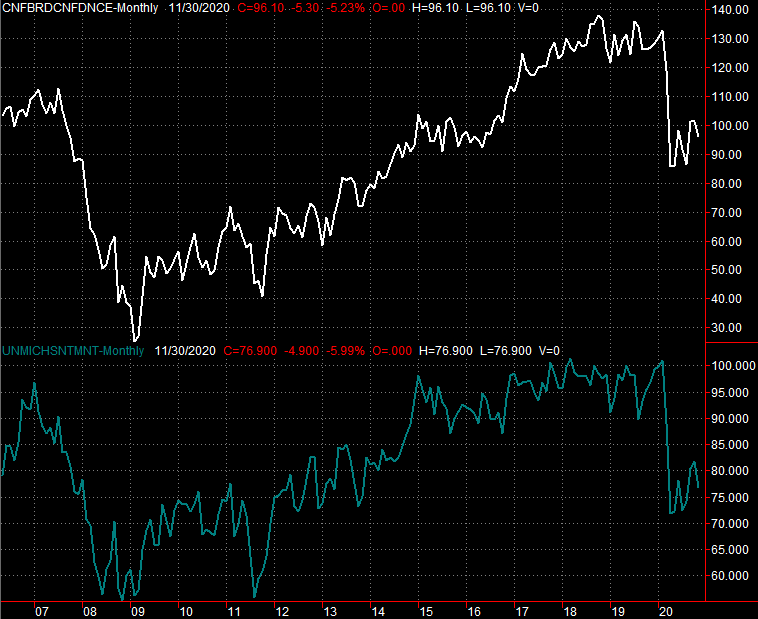 We're starting this week's analysis out not just with a weekly chart of the NASDAQ Composite, but a long-term weekly chart that goes all the way back past 2016. We need this much time to fully illustrate what's taken shape just since March. This vantage point offers some eye-opening perspective on how big this rally has become, not despite the pandemic, but possibly because of it.

Take a look. The composite is now up 92% from its March low, blasting past the upper edge of a trading range that started to be established by 2018. This was one of the biggest/best moves of the bull market as of July. It easily became the biggest/best as September, and has only tacked on more gains in the meantime. Forget the fundamental questionability of the move. From a purely technical standpoint, this is unheard of. 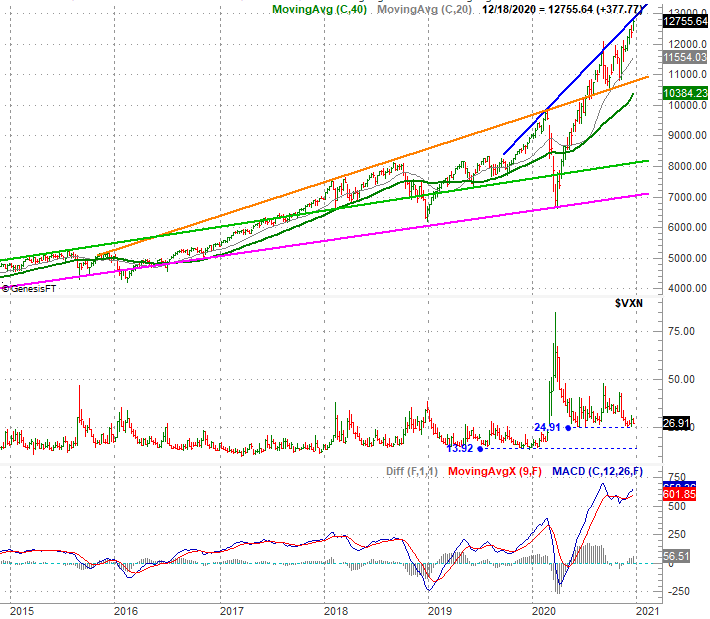 The S&P 500's long-term weekly chart looks similar, though not identical. Namely, the S&P 500 has only bumped into a couple of technical ceiling as of this month (orange and green) without surpassing them. In fact, you could argue the S&P 500's advance is slowing as down these barriers have been encountered. 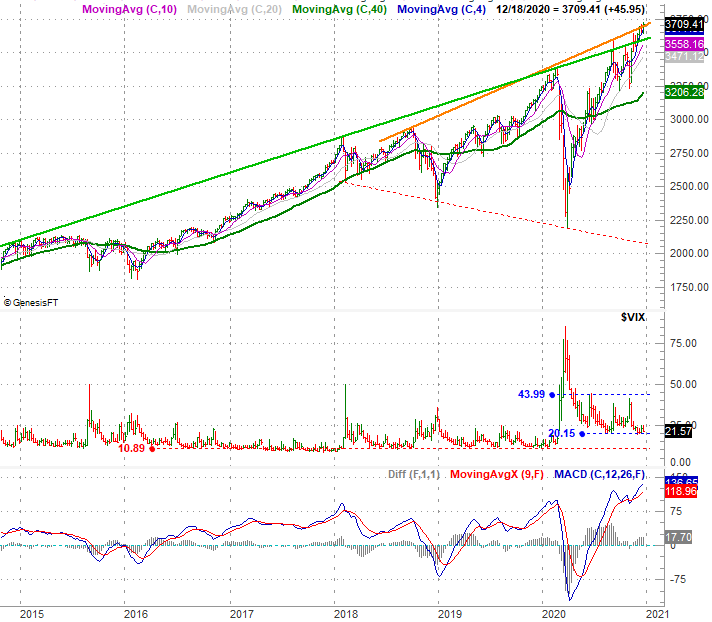 This disparity isn't entirely shocking. We know big, familiar tech names like Apple, Alphabet, and Amazon have led the charge, and most of those are NASDAQ-listed names. That leadership, of course, is concerning. If those names fall out of favor, their weakness can have a ripple effect on the broad market and lead it lower.

Until it's clear that's happening though, follow the momentum. Tis the season for bullishness anyway, and will be at least through the first few days of the coming year. The image below reminds us of this. Even in years that end up being a net loser, the last couple of weeks are typically bullish ones. And, despite the huge gains since March, the February/March pullback was so big that we've only "caught up" with the average year-to-date gain for the S&P 500.

Still, it wouldn't be unwise to start planning on what to do if-and-when the pullback starts to take shape, and what might happen if it does. Specifically, how far might that knife cut, and at what point should we worry? 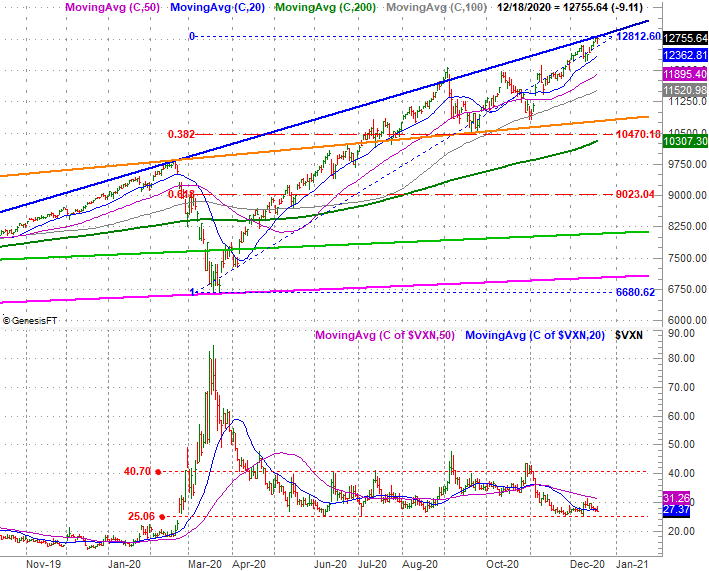 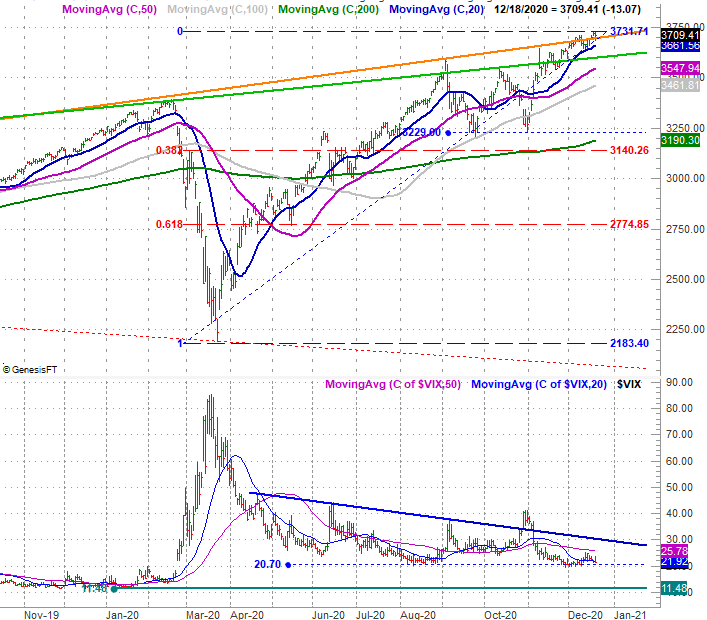 The daily chart of the S&P 500 shows us something else worth noting... the VIX. So far it's finding a floor at 20.7, which is at least working against the market's bigger rally. If that support should break, it could (and probably would) in turn allow the market to more fluidly move higher. Again though, that sets the stage for a meltup kind of scenario that finally exhausts this rally and sparks some profit-taking.

The timing for this pivot is perfect, with the last hurrah for the move taking shape near the end of the year, and in the shadow of stimulus check talks. It'll be tough to keep these optimistic emotions running high as we transition into a new kind of presidency.