FANG Stocks Update: Alphabet Out of Favor, Apple Overbought, and Netflix Rolling Over 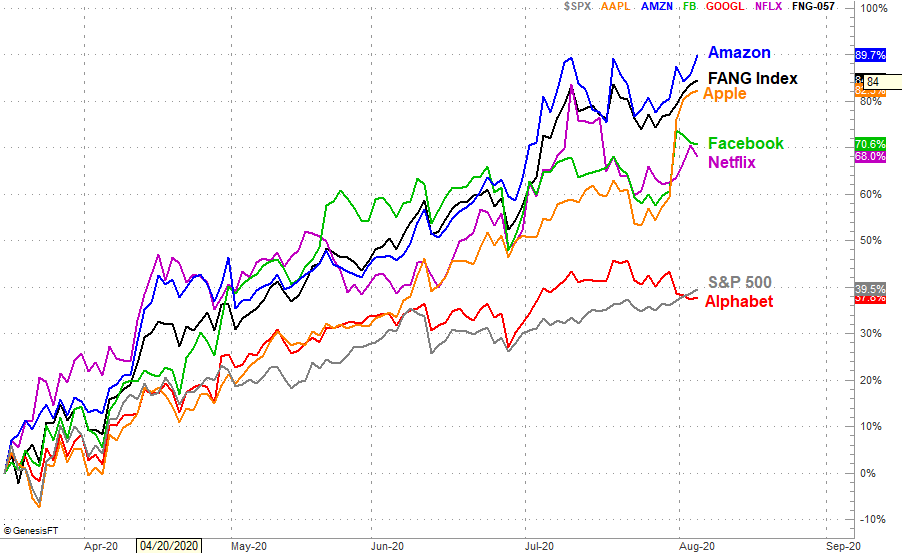 The past five months have been great ones for the broad market, and even better for FANG stocks... save one. That's Alphabet (GOOG, GOOGL). It's struggled to stay ahead of the S&P 500 since the mid-March bottom, and as of this week has slipped back under it in terms of performance. It could recover. Given how perpetually weak it's been for months now though, there's no reason to think it's due to move to the head of the FANG stock pack.

At the other end of the spectrum, Amazon (AMZN) is leading the pack thanks to a heroic July. Makes sense. It's pretty much been the kind of the COVID-19 contagion, keeping people stocked up and sane while locked in at home. Apple's (AAPL) next in line, but only because of a huge jump since late last month. It doesn't seem like that surge is built to last. In fact, the advance has already slowed this week.

The graphic below tells the tale. Most of the FANG stocks have actually underperformed the FANG Index (as measured by FANG futures) most of the time. There's usually just been one single leader since March's lull. At first it was Netflix (NFLX), and then Facebook (FB). Now it's Amazon. The fact that we're seeing regular leadership rotation is a lesson in and of itself. If you're able to spot the leader of the hottest of the hot and most-watched of the highly-watched tickers, you've got an edge.

In any case, even aside from Alphabet's continued weakness, all the FANG stocks look vulnerable here. Netflix has already shown weakness. It's bounced this week, but peeled back pretty easily last month. The bears have shown some of their cards.

The only exception might be Amazon. It could keep chugging, only because the rally thus far has been so reasonably well paced. Again though, they're all at risk.

FANG stocks - and tech stocks and the NASDAQ (in many ways one of the same) - have drastically outpaced the overall market, and the S&P 500. We're starting to see some rotation out of tech-heavy areas and growth, and a migration into more diversified and less aggressive areas. The Dow Jones Industrial Average (not shown) is the bluest of the blue chip barometers, and it outpaced its index counterparts on Wednesday. It's also worth pointing out the gains most tech names made on Wednesday were on low volume, extending a multi-day stretch of warning volume the higher these stocks climb.

In any case, the only single chart worth drilling into today as Alphabet's. The recent weakness has pulled it back under its 20-day moving average line (blue), and it's now testing its 50-day moving average line (red) as well as a straight-line support (orange, dashed) that tags most of the key low since April. That's a huge floor, and if it breaks, there's little that can be done to stop a selloff from unfurling. Other FANG stocks (and non-FANG) stocks might take a cue from GOOG's weakness. The next most plausible landing sport then is somewhere around $1360, below the 200-day moving average line (green) but above June's low. That potential floor is marked with a light blue dashed line. 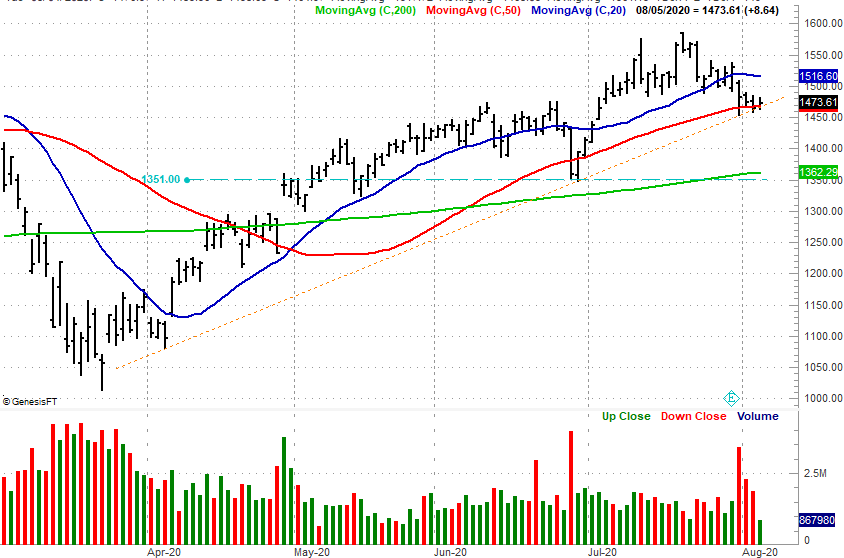 This level of analysis may seem like overkill, but it isn't. The FANG names are unique... from the rest of the market, and even from one another. Not only do they offer the market's best trading "movement," in many ways they're predictable IF you know what to look for from each name. Each ticker has its own personality, so to speak. That's why we've developed the FANG Options Advisory - to make the most out of the best of the best opportunities when they arise.  The key is narrowing your focus universe to a small number of stocks you can learn very, very well. If you'd like to plug into the power of FANG stocks with options, go here to learn more.