Don't Read Too Much Into Wednesday's Bounce 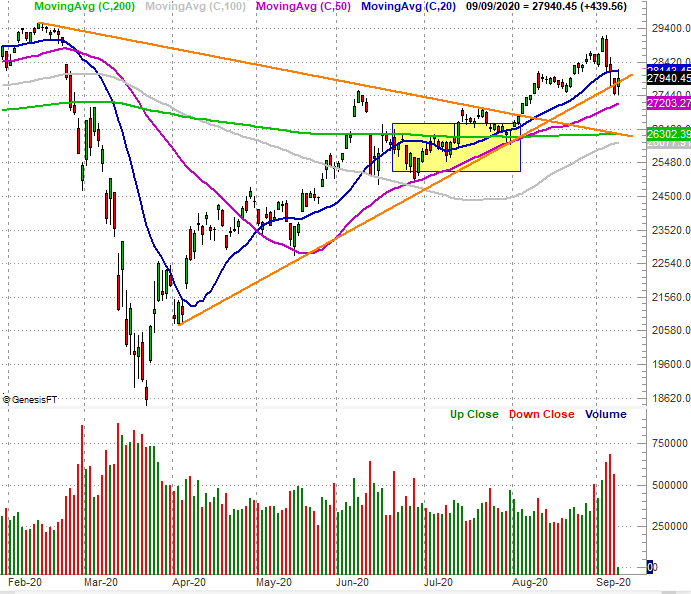 Credit has to be given where it's due - the bulls won the day. Stocks were up an average of about 2.0% on Wednesday, ending a short-lived but harrowing selloff that shaved the S&P 500 by about 7.0%. If nothing else, investors can take a breath.

If you're thinking Wednesday's bounce marks the beginning of a prolonged recovery move though, think again. That may be the ultimate outcome, but we've yet to see any of the big clues that's what's in the cards. Mostly we're seeing signs that the market remains on the fence. The good news is, the market's make-or-break levels are quite clear at this time.

For the S&P 500, that's chiefly the fact that it's still below its 20-day moving average line (blue). Indeed, the index even tested that line with Wednesday's high, only to peel back from it before the closing bell rang. Likewise, the index remains below the lower edge of the rising trading channel - framed in orange - that goes all the way back to April's low. 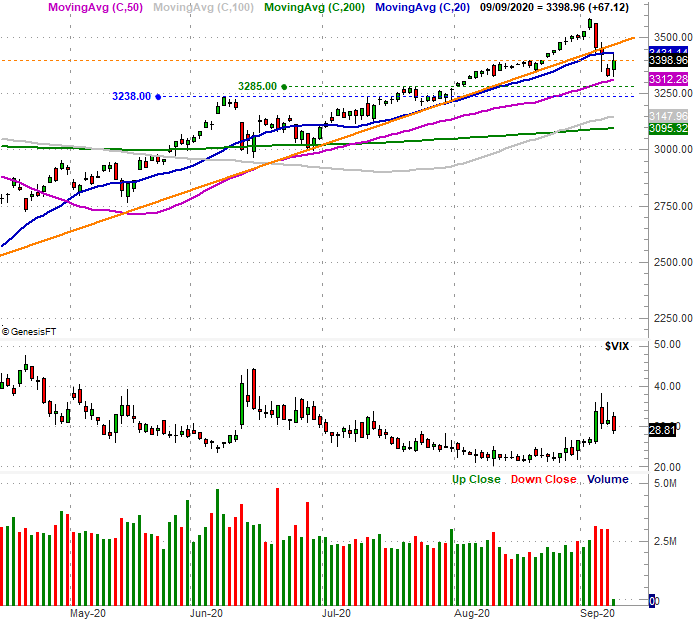 The good news? The S&P 500 seems to be finding support near its 50-day moving average line (purple) currently at 3312.

The NASDAQ Composite's is the same basic story - below the 20-day line (blue) and under the bottom edge of a rising trading channel (orange) that connects all the highs and all the lows going back to April. But, the composite continues to find a floor at the 50-day moving average line (purple) even if it's putting more pressure on it than the S&P 500 is. 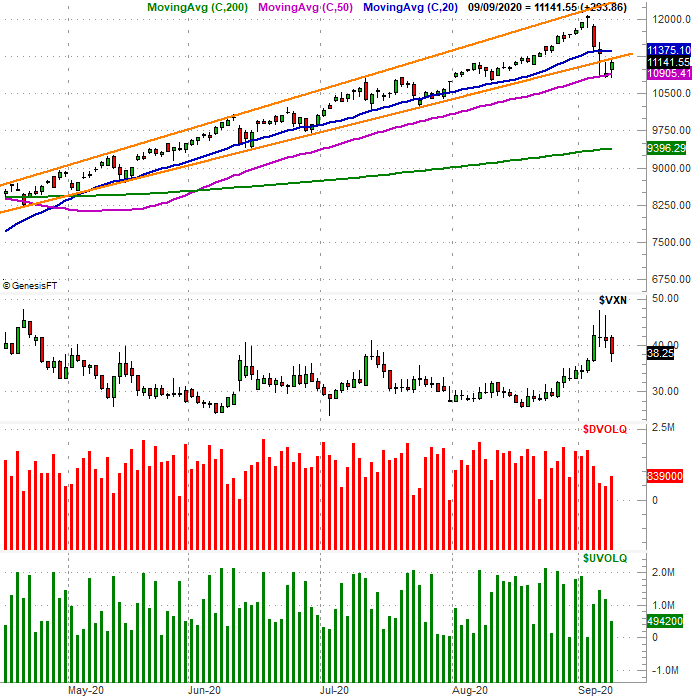 As for the Dow Jones Industrial Average, it too is below its 20-day moving average line, but hasn't convincingly broken below its straight-line floor that tags all the key lows since April. That comes as no big surprise... the Dow has been doing its own thing for some time now, being the antithesis of the NASDAQ (value versus growth, tech versus old-school). Still, the Dow's being forced to put up a fight.

So if not the real deal, where's the bounce come from? A lot of it may have been the result of the 7.0% pullback that just took three trading days to materialize. That's a lot of ground to cover in a short period of time, and if you drop anything from high enough it will bounce. That dead-cat bounce doesn't necessarily always find follow-through.

On the other hand, as long as stocks find technical support where they're currently finding it, the bulls have a fighting chance.

The real problem for the bulls is a combination of circumstances and timing. There's no denying that - in retrospect -- the February and March selloff was overdone. COVID-19 is problematic, but not devastating. Traders unwound their mistake in a big way beginning in April, but the rebound ranging from 50% to 70% (depending on the index) is simply too much, too fast. Now there's a lot of profit-taking potential on the table.

That profit-taking potential is also on the table at the worst possible time. The month of September is historically the worst on, on average, for the broad market, and the only month where a loss of more likely than a gain. It almost goes without saying that the deck was stacked against stocks once August came to a close.

The fact of the matter is though, as vulnerable as the market may be here, there's still just as much of a chance that this rebound effort ends up getting traction. We've just got to be patient and wait for the clues to develop, and then not be too quick to react once we see that start to happen. It's all about the aforementioned lines, and the daily closes. The intraday action can't even really be trusted here.