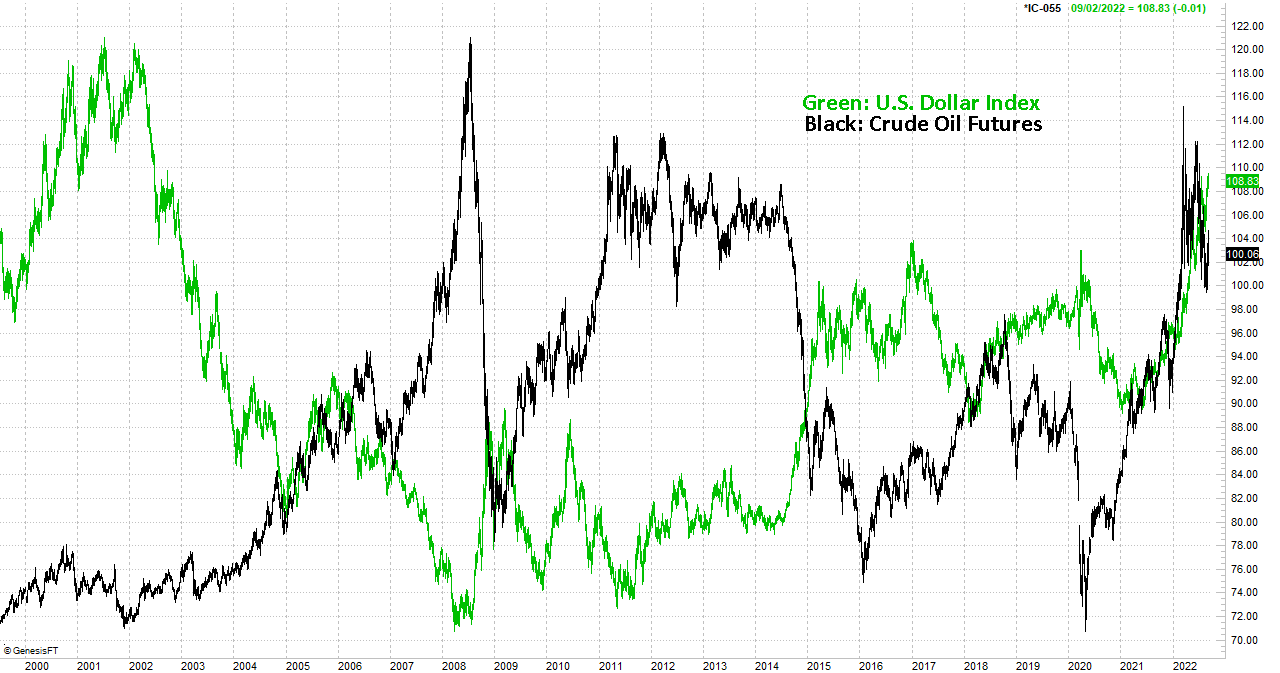 If you're reading this, then you likely know oil prices have skyrocketed since bottoming out in early 2020.  From under $70 per barrel then (futures, not spot prices) to well in excess of $100 per barrel now, the rise in crude oil prices has resulted in some serious pain at the pump... even if it's easing now. Blame the COVID-19 pandemic and then Russia's invasion of Ukraine, both of which have upset the demand and supply balance, as well as the supply chain.

Largely lost in the noise of crude's big runup, however, is that it never should have happened -- at least not to the degree it did. See, the U.S. dollar's been rising since mid-2020 as well, which normally has the effect of driving commodity prices down. This time, it didn't. The comparison chart below tells the tale.

It's not an entirely outrageous outcome. As was noted, geopolitical turmoil has created an unprecedented backdrop. The market's not exactly sure how to respond. Given what it can latch onto though, the rising greenback as well as the rising price of oil both make enough sense to the investors and traders that ultimately dictate their prices. The rest of the world's currencies are abnormally weak right now, while the supply of oil really is rather well wrecked.

The depth of this dynamic, however, still doesn't make a great deal of sense. Oil's barely flinched at the fact that the U.S. dollar is still moving into new multi-year high territory. Meanwhile, the supply of -- and production of -- crude oil is nearing its pre-pandemic levels. That hasn't mattered much either.

So what's keeping the price of oil so well propped up? That's just it? Nothing, really. It's high because the market is keeping it elevated, mostly unresponsive to the data you're seeing above. They're seeing it too.

It's a problem nonetheless though, or will be sooner or later.

Yes, the U.S. dollar could readily be dialed back. Don't be too quick to move on that expectation though. Most of the rest of the world is facing inflation as well, but not as much as the United States is. They're neither in a position to nor need to continue raising interest rates the way the U.S. Federal Reserve still seems ready to raise them. That buoys the U.S. dollar, which will sooner or later work against crude oil prices.

At the same time, while oil production continues to come back online and stocks/reserves continue to be rebuilt, there's a considerable time delay between drilling and refining and then stockpiling. That's a sword that cuts both ways though. While improving supply has yet to make a major dent in oil prices, once a few weeks' worth of drilling and refining starts to find its way into storage, it's apt to fill up those storage facilities in a hurry. This should undermine the price of oil much faster than the market currently says is likely.

The point is, crude oil isn't likely to hold near its current price of just under $100 per barrel for a whole lot longer, even if it feels like it could. There's too much working against it. It's just that so far, oil's been able to shrug off these red flags. Nothing lasts forever though.