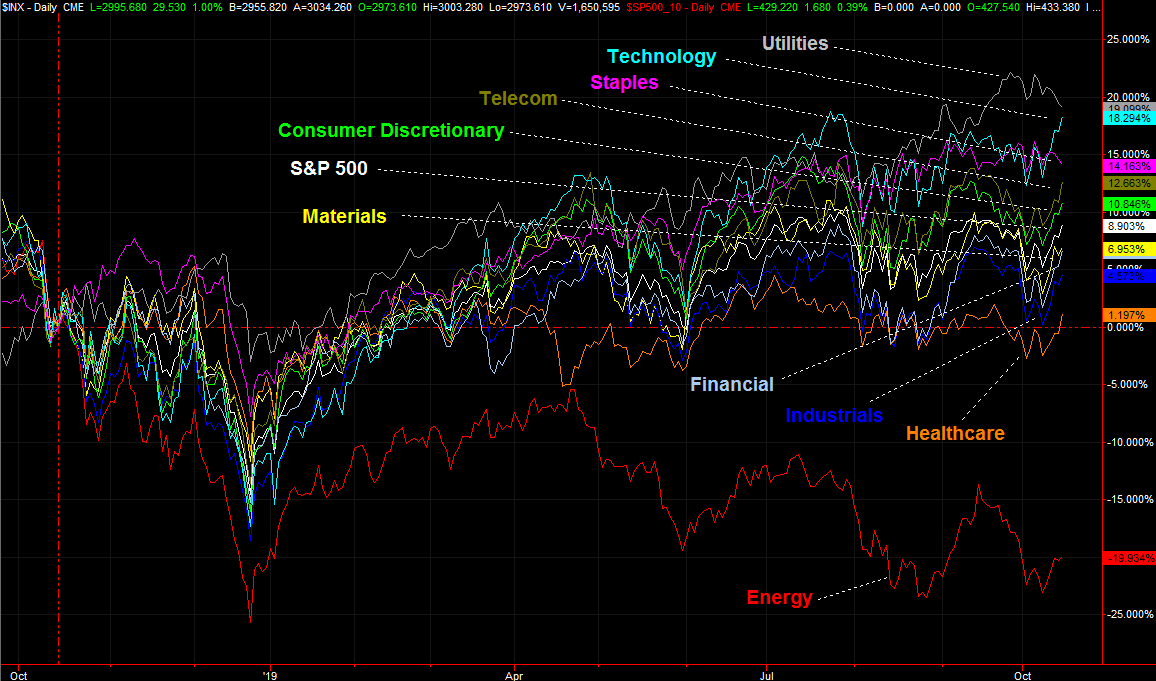 The recent rally effort is suspicious to be sure; it's not the time of year for bullishness, and there's plenty on the landscape that could torpedo the market. Yet, there it is. The S&P 500 is up nearly 3.7% from its early October low, and above all the key moving average lines.

There are a couple of problems with the advance. One of them is the modest amount of volume behind it (particularly with Tuesday's gain). The other is the fact that the VIX is close to an absolute floor around 12. Tuesday's last reading was at 13.5. That's about as low as the VIX can go before optimism runs dry.

As it stands through Tuesday's action though, the investors who are participating in the market's action at this tricky time are thinking bullishly, and aggressively.

The clue: Investors are selling off their defensive holdings, and plowing back into more aggressive arenas.

The performance comparison of all the key sectors below speaks to that end. Utilities stocks, which had been leading the way for the past twelve months, peaked in late September and are making lower lows. Consumer staples names have also lost ground, as the reliability of recurring purchases made by consumers has suddenly lost its luster.

The winners? Technology names, for starters. Although they've been surprisingly solid performers for most of the year and held up surprisingly well since September, they were the quickest and best rebounders with this go around. It's the one sector investors would make a point of accumulating when they're feeling optimistic. Industrial stocks and discretionary names have also been impressive since early October. They'd be the other key areas seen as must-haves when the outlook is bullish.

The one noteworthy area that isn't doing so hot: Energy. Oil and gas stocks just can't get over the geopolitical turmoil of oil. Take the hint. If-and-when the energy sector is ready to recover, it will be clear.

Sometimes the sector interplay is a clue, and sometimes not. Sometimes sector groups just do what they do. Regardless, all big trends start out as small ones. Once a sector makes a turn, so to speak, it often continues to move in that direction. With this particular chart above, crosses of lines often confirm a strong trend is persisting. Incredibly enough, we only have one such instance right now ... the technology sector's performance line moving above the consumer staples performance line. The fact that more lines haven't crossed one another suggests that not only is the tide rising, it's lifting most boats equally. That's a bit of a red flag in and of itself.

As always, it's not the initial move that means much. It's what happens when a move is put to the test. If the market survives a bump in the road and then the technology sector continues to move above other lines on the chart, take the hint.