This Rally Is Brought to You by Some Old, Familiar Leaders 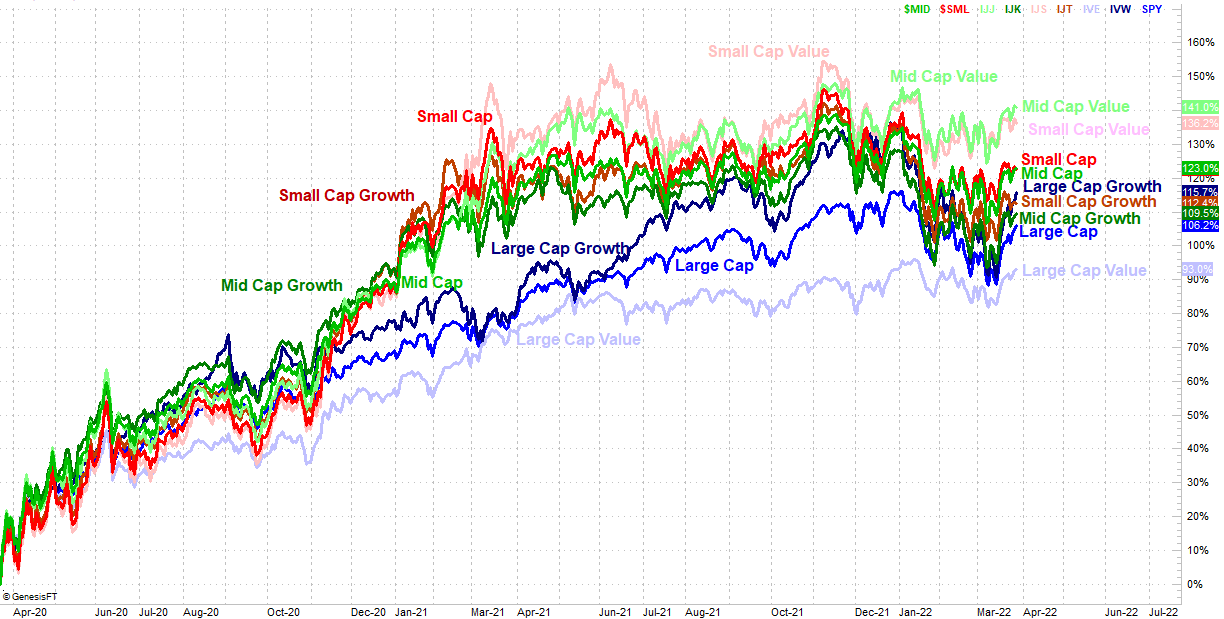 Most traders know the broad market imploded very early this year. What many people may not realize, however, is that large cap growth stocks - the market's leading group since the bottom made in early 2020 - also led the way lower. All grouping suffered in January and February, to be clear. But, the market's biggest and high-profile stocks dished out the most pain.

The steep selloff also marked a potential turning point for stocks as a whole. To some, it looked like a good starting point for value stocks to start outpacing growth stocks. And, perhaps to a lesser extent, the backdrop set the stage for a leadership shift from large caps to small caps. Value tickers tend to perform better than average when rates are on the rise and growth is tougher to muster. And, the subsequent economic headwind favors the more nimble small caps that can navigate around that headwind.

If the past few days are any indication though, January's and February's weakness didn't serve as a reset of any sort. Large cap growth names have led the way since the middle of the month, rekindling strength that had been conspici9ously missing since the latter part of 2020.

As is usually the case, a picture helps tell the tale more efficiently than words do.

Here's a look at how things took shape going all the way back to March of 2020, when the pandemic's arrival in the United States up-ended everything, but only briefly. All market caps and styles did will initially, but by December of that year all large caps were out of gas. [Note that the charted style/cap performances and their labels are color-coordinated.]

That tank was refilled in mid-2021... sort of. That's when large cap growth names took off again, catching up with small and mid caps, but leaving large cap value behind. These rapid gains only made this group more vulnerable to profit-taking during the first two months of this year though. The pullback almost pulled large cap growth stocks all the way back to "last place" by early March, if the March-2020 low was acting as the proverbial starting line.

Take a close look at the dark-blue line that's crossing above a few other performance lines on the chart above, however. Or, better yet, take a look at the same performance comparison just since the March 14th low below. Large cap growth stocks aren't just leading again. They're blowing all other groups away. Indeed, on Monday, investors were plowing out of value stocks specifically to get into growth names, underscoring a broad theme that started to become evident a couple of weeks ago. 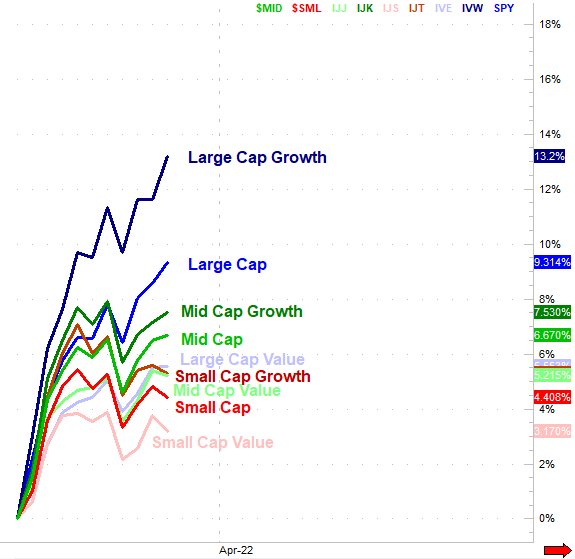 There are a couple of interpretations of this disparity. The obvious one is, large cp growth is back en vogue, and traders would be wise to follow this lead. These are after all what are usually the market's hottest stocks anyway.

The other interpretation is a bit contrarian, almost to the point of being questionable. That is, there's something bigger-picture unhealthy about the fact that once again, only a small subset of stocks is doing the lion's share of the heavy lifting. Not that every style and market cap group has to perform exactly the same, but most sustainable rallies tend to have participation from all the major style and cap groupings. This dynamic almost says investors are fishing for the next hot trade, somehow knowing they have to pick-and-choose their stocks since not every name is catching a bullish wave.

It's too soon to make a definitive call, of course, and this is only a small part of the details you should consider here. As always, keep a close eye on all the conventional daily charts as well. The S&P 500 finally pushed above its 100-day moving average line on Monday, and the VIX continued its trek lower. On the flipside, the volume behind the market's recent gains remains pretty tepid. A bunch of people are waiting on the sidelines, unconvinced this rally is for real. The fact that growth -- and large cap growth in particular -- is outpacing value is simply one more thing to keep in the back of your mind.