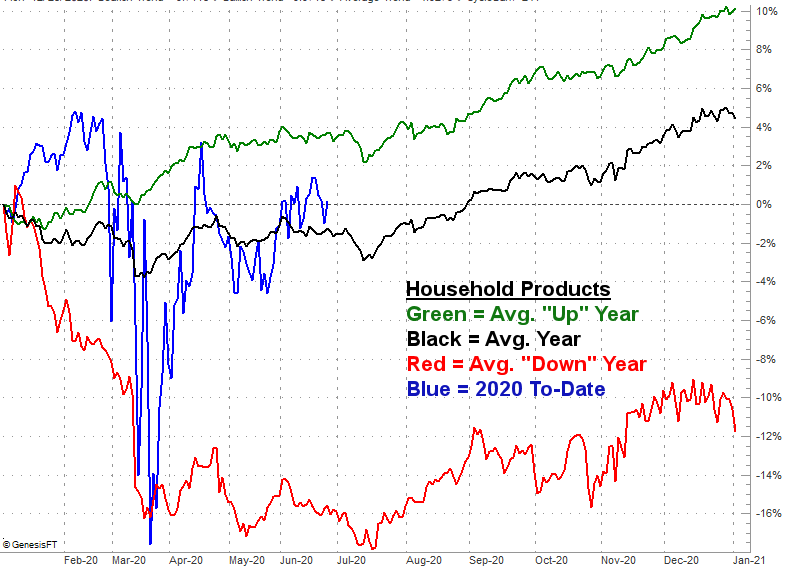 We're at the halfway point of the year, and what a wild year it's been so far! Stocks reacted horribly to worries about the coronavirus in February and March, but traders have shrugged that fear off in the meantime. The market isn't where it would normally be this time of year (it's well behind its usual tract). But, that lagging may ultimately prove to be fuel for a faster-than-normal recovery.

With that as the backdrop - and if you feel safe assuming things may drift back to normal during the proverbial back nine of 2020 - then what's below may be of interest to you. It's a rundown of the stock groups that tend to do well during July, even when the overall year is apt to be a poor one. In no particular order...

Companies like AZZ Inc. (AZZ) or Capstone Turbine (CPST) are far from being household names. In fact, most investors may have never even heard of either. But, for traders willing to go off the beaten path, electrical equipment makers for some reason tend to log incredible Junes and Julys; perhaps there's seasonal or weather-related buying of such equipment. Whatever the case, the odds particularly favor this group now after such a nasty start to the year. The typical July gain for heavy electrical equipment stocks is about 6.0%, but that's a pretty reliable advance regardless of how the full-year goes. 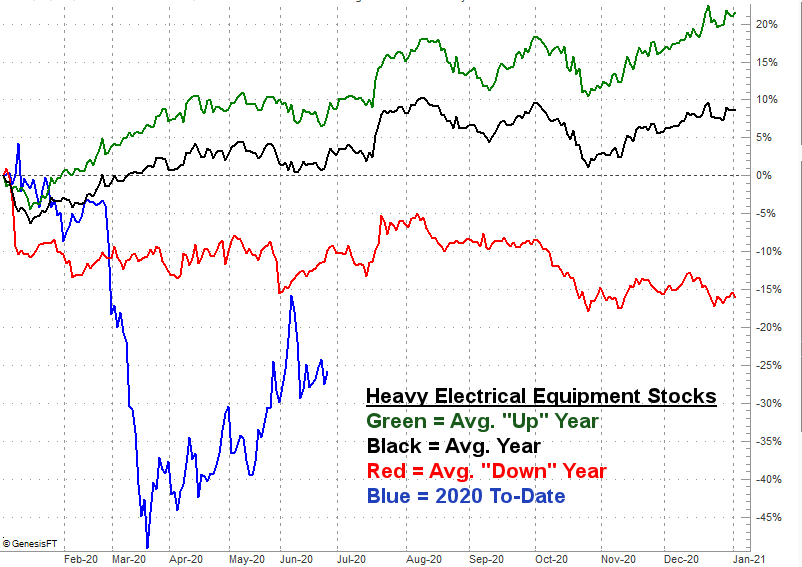 The first half of the year is often a wobbly time for household product companies like Clorox (CLX) and Procter & Gamble (PG). But, regardless of the first half, the second half of any year is habitually strong... usually through the very end of the calendar year. There is one noteworthy quirk to note here, however. Strangely enough, that prolonged advance doesn't start to pan out until after a pretty consistent setback during the first half of July.

Given the environment that's forced consumers to clean their homes while companies do more of the same for their places of business, one could argue these stocks should be further ahead than they actually are.

Like household products, computer peripherals and storage names don't necessarily get a great start to the month of July. But, by the middle of the month arrives they're generally going full steam and moving into what's often nearly a three-month advance. Do know though, that there's rarely a scenario where that rally last four months. If you're wondering, these are stocks like Seagate Technology (STX) and Logitech (LOGI). 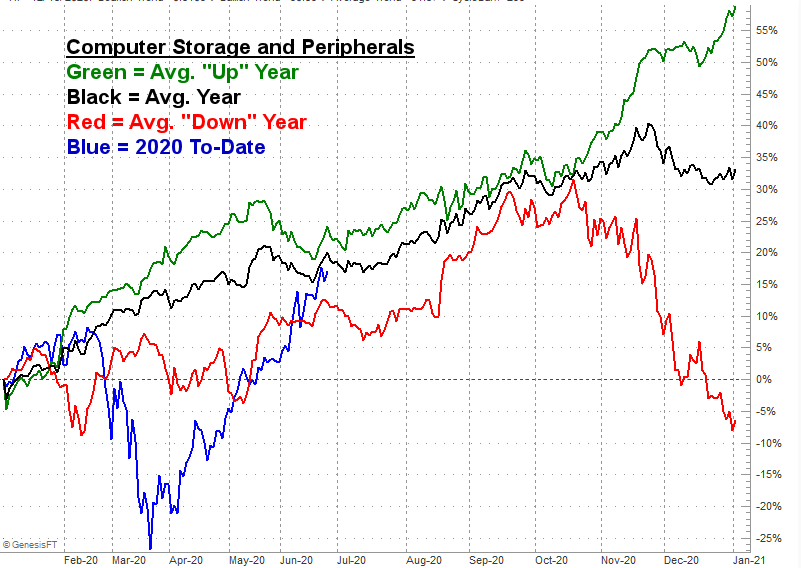 Finally, among the market's more reliable summertime winners you'll find water utility stocks like American Water Works (AWR) and SJW (SJW). This group gains an average of 2% in July, which isn't much, but July begins what's usually a three-to-four month advance of around 6%. That's still not a ton, but in an environment loaded with so much uncertainty, that trend could be useful. That's true even for the occasional off-year. 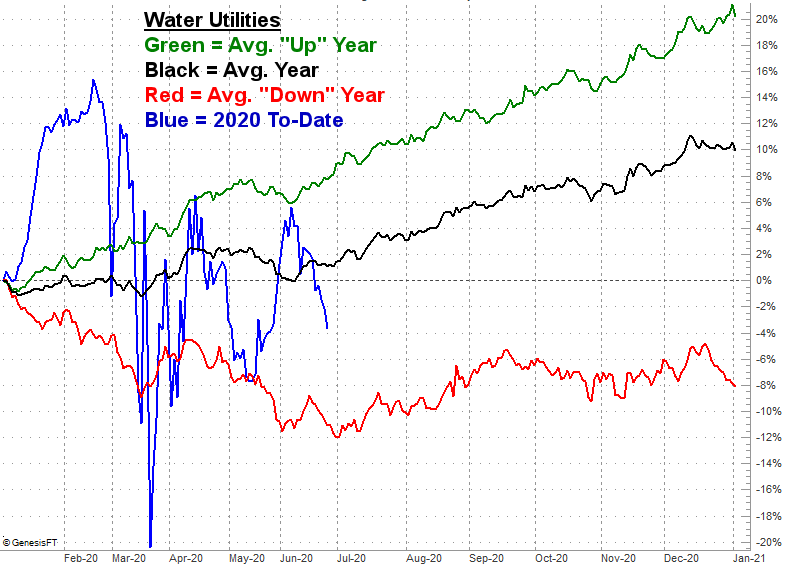 As for reliable losers, there are only two worth a closer look.

You know them better was garbage companies like Waste Management (WM) or pollution control name CECO Environmental (CECE). Either way, while these stocks tend to perform well in the spring time of any year, they tend to perform poorly in the summer of any and all years - losses that start in July and last through October, on average, shave off around 6% of their value during that time. When things go bad, they can go very bad very quickly in July alone. 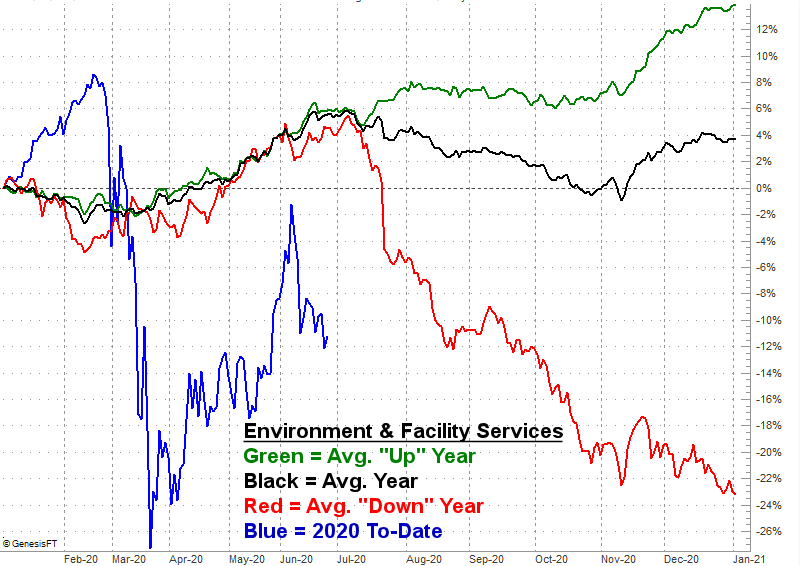 The chemicals business has been a tough one for a long time now, and these stocks - names like Westlake (WLK) and Methanex (MEOH) - have the results to prove it. On average they lose about 5% in July, leading into a lackluster August. They struggle to ever hold their ground during the summertime, and when things go very badly, July can be disastrous and lead into a similarly disastrous October. [On the flipside, October and November CAN be very bullish periods. Ergo, this isn't a tendency that would merit holding a position beyond August.] 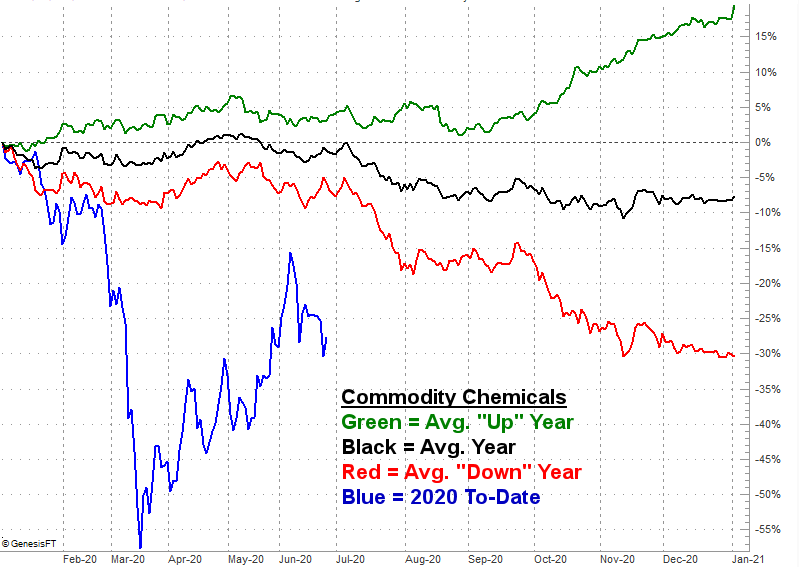 These are only tendencies, of course.... averages. Stocks can and do very unexpected things from time to time, and if there was ever a year for stocks or sectors to fly off the rails, this is it.

Nevertheless, good traders respect the odds. They also compare those tendencies to where a particular group of stocks is compared to where they normally would be at this time of year.