Style Rotation: Value is Good, Smaller is Better, and the Timing is Awful 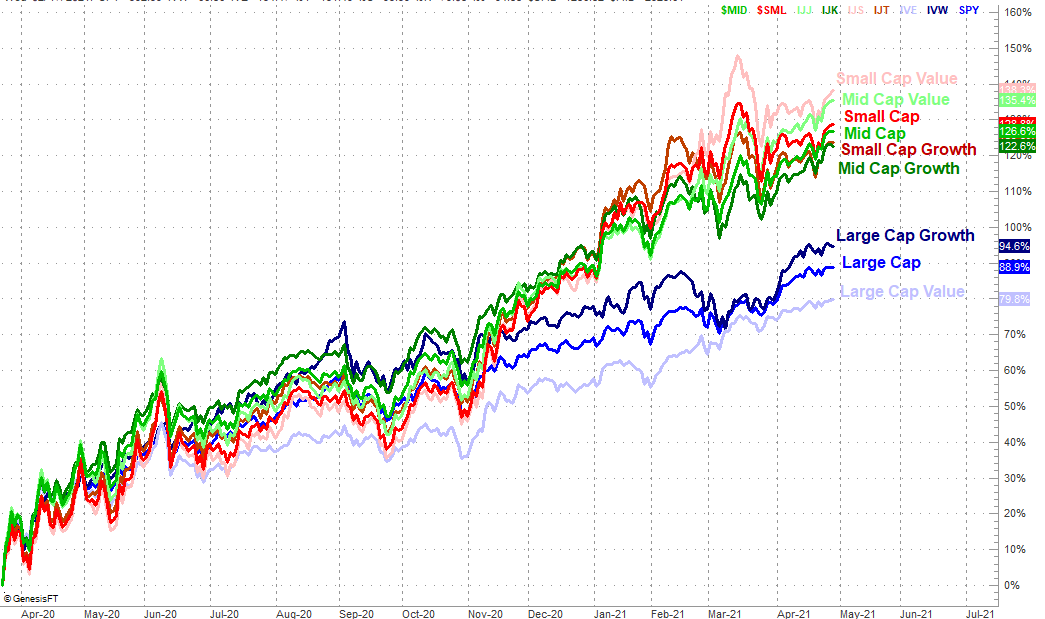 Several days ago we compared the performance of all the major market cap and style groups, pointing out traders were falling in love with small and mid caps at the expense of large caps, and traders were favoring value over growth. The only real concern at the time was turbulence that was impacting all these groups. It posed the threat of turning everything around so that leadership (or laggardship) didn't matter.

Things have stabilized a little in the meantime, largely thanks to a widespread, gently bullish undertow. But, we're still seeing the same basic divergences we were seeing then. That's pronounced strength from smaller companies and value names, and clear weakness from growth and large cap picks. Take a look.

If you look carefully you'll actually see all large caps performed better than small and mid caps have since late last month. It's just that they were so far behind by January (a gap that widened through late last month) that recent large cap leadership hasn't been enough to push them back in the lead. Small and mid caps were also incredibly strong performers in mid-March, leaving little chance of revisiting their peaks with this month's bullishness.

Nevertheless, it's clear that small caps and value stocks have had no trouble attracting buyers, being the groups to accelerate late this month while large caps decelerated. Let's take that at face value even though we know this rally and this prolonged style and market cap leadership divergence has gone on a little too long. We'd prefer to see emerging leadership and laggards at the beginning of a broad new trend rather than at this late stage of a major move.

There's another problem. Before and after Wednesday's session several companies dished out impressive earnings reports that immediately lifted the market and/or index futures. We're headed into Thursday's session at least with a bit of bullish euphoria that works in favor of the very same large cap growth names that have been tepid performers of late. Now it's not clear where we stand.

We will say, however, one good day isn't enough to alter the bigger trends illustrated by our comparison chart above. Let's see if the market's still loving large cap growth picks on Friday (or even on Thursday, for that matter). If that interest wanes quickly, we'll assume what we're seeing here is what we can expect to see for the indefinite future.

Of course, there's another problem. We're moving into a time of year that's at best a tepid one for stocks, and at worst a bearish phase. From the beginning of May through the middle of September stocks slump, and we're starting this year's May/September period already a bit overextended. It's possible small caps and mid caps and value names could actually benefit from such weakness. More realistically though, weakness from large caps will set a bearish tone that proves a drag on all slivers of the market.

We'll update this graphic if-and-when something new or interesting develops.