Stock market crash? It would have happened by now, trader says 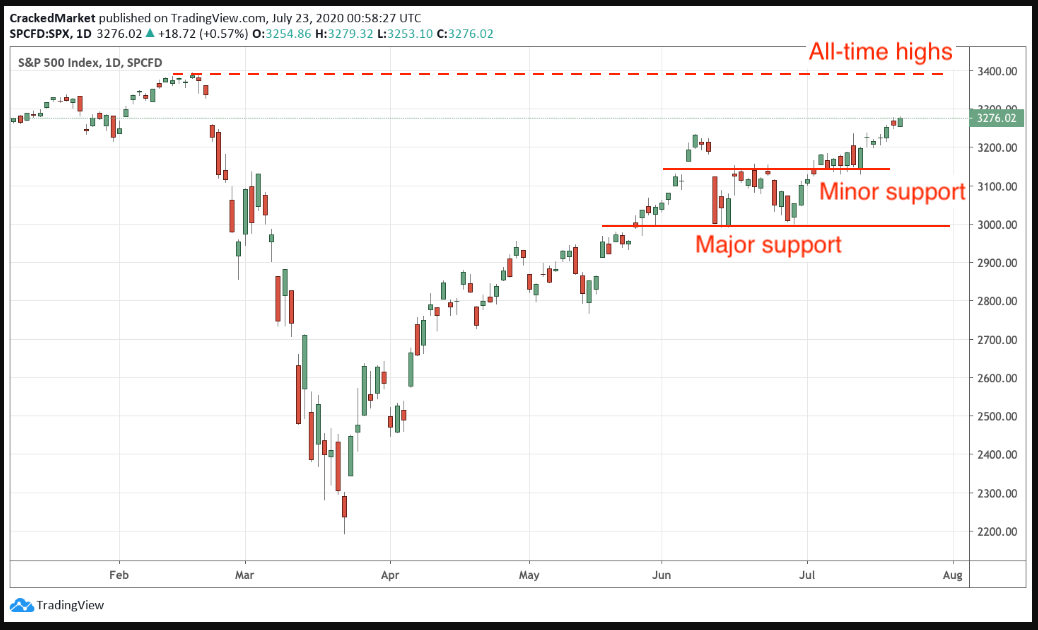 - 'While the cynics obsess over the negatives, the market continues focusing on the positives,' and the S&P 500 is closing in on a record high -

Headlines splashed across the financial news outlets these days would have you believe the stock market is on the verge of collapse after its monster rally from the lows earlier in the year, but Jani Ziedins of the Cracked Market blog isn't buying it.

Or, rather, he is buying it. The market, that is.

"We make money following the market's lead, not reacting to headlines," he wrote. "If this market doesn't want to breakdown, there is no arguing with it."

And, despite myriad reasons for a selloff, the market clearly isn't breaking down. As you can see from this chart, the S&P 500 is closing in on a record high, with plenty of support, according to Ziedins's technical assessment of the chart lines:

Ziedins explained that, for every negative that could slam into the stock market, there's a positive counterargument to be made. Infection rates are high, but progress is being made on a vaccine. Unemployment is off the charts, but the government's handing out free money, etc.

"While the cynics obsess over the negatives, the market continues focusing on the positives," he wrote. "Stocks are not racing higher like they were in March, April, and May, but they are amazingly resilient. 3k support was rock solid in June and we keep bouncing back to the rebound's highs."

Are there enough red flags - hefty valuations, geopolitical tensions, rising coronavirus cases - to suggest that stocks should be going down? Sure, but, as Ziedins sees it, there is no room for "should" in this relentless bull market. "Either it does or it does not," he said. "Anyone trading 'should' is losing a lot of money right now and we don't want to join that group."

His advice for traders is to keep moving those sell stops up to protect against an inevitable downturn and ride the wave of higher prices the market appears committed to delivering.

"We are still on track to challenge all-time highs over the next few weeks. If this market was going to breakdown, it would have happened by now," Ziedin said. "The road won't be fast or straight, but as long as we keep experiencing more up than down, everything remains on track."

There were some bumps in that road on Thursday, with the Dow Jones Industrial Average down 0.5%. The S&P was also edging lower, while the tech-heavy Nasdaq Composite was under pressure.