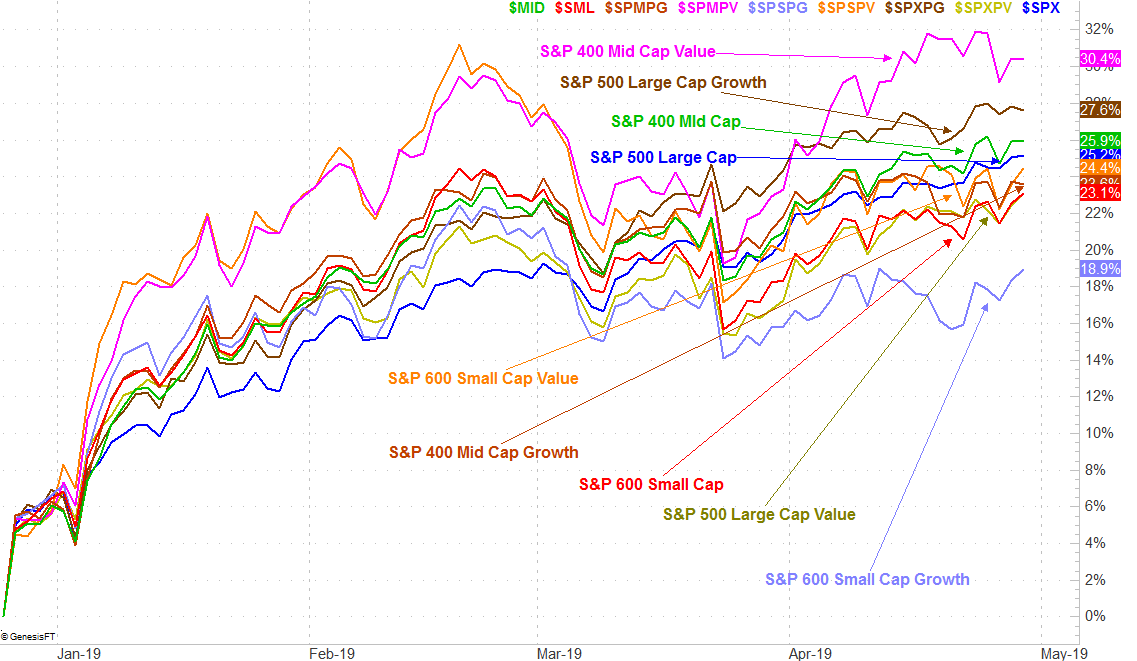 The market’s rebound from the late-December low has been impressive, but not equitable. That is, some groups have done very well, while others have done poorly.

The odd part: There’s been very little rhyme or reason to the market’s leaders and laggards. Neither market cap nor growth/value have been factors in the matter.

That may or may not matter, however, given that the laggard groups are starting to perk up and the leaders are starting to cool off. While a marketwide meltdown can and likely would drag all groups down with it, if the broad market can simply tread water or coast, we’re likely to see a tradeworthy shift in what’s working and not working.

Little else makes sense, however.

It’s unusual for multiple reasons, not the least of which is that value names of all market caps tend to also move as a group, as do growth stocks. Here they’re not.

Another reason this is an unusual divergence: Small caps aren’t doing all that well, but arguably should be. When investors are feeling truly confident that a market rally is built to last on solid economic underpinnings, small caps and mid caps tend to find favor at a faster clip than large caps do.

We may be close to a reset that pushes things in that direction though.

Take a closer look at the chart above. Large caps are slowing down; large cap growth has flattened altogether. Mid cap value – the four month leader – has rolled over. But, the small cap growth names that have been hugging the bottom have shown real strength for the past week, pulling ahead of all other groupings. Small cap value stocks aren’t far behind that gain.

They’re clues of budding strength that should be taken at face value.

This level of in-depth analysis may seem like overkill, and perhaps ineffective in a relatively unpredictable market environment. It’s worth the time and effort though. Even if the strategy only drives an edge of a couple of percentage points, a market cap and style rotation like this one can take shape several times per year. Even capturing a handful of those shifts can bolster overall results.

One trigger to particularly watch for is crosses of the lines plotted on the chart. When one passes another, bearishly or bullishly, it often indicates there’s a new trend with some momentum behind it.