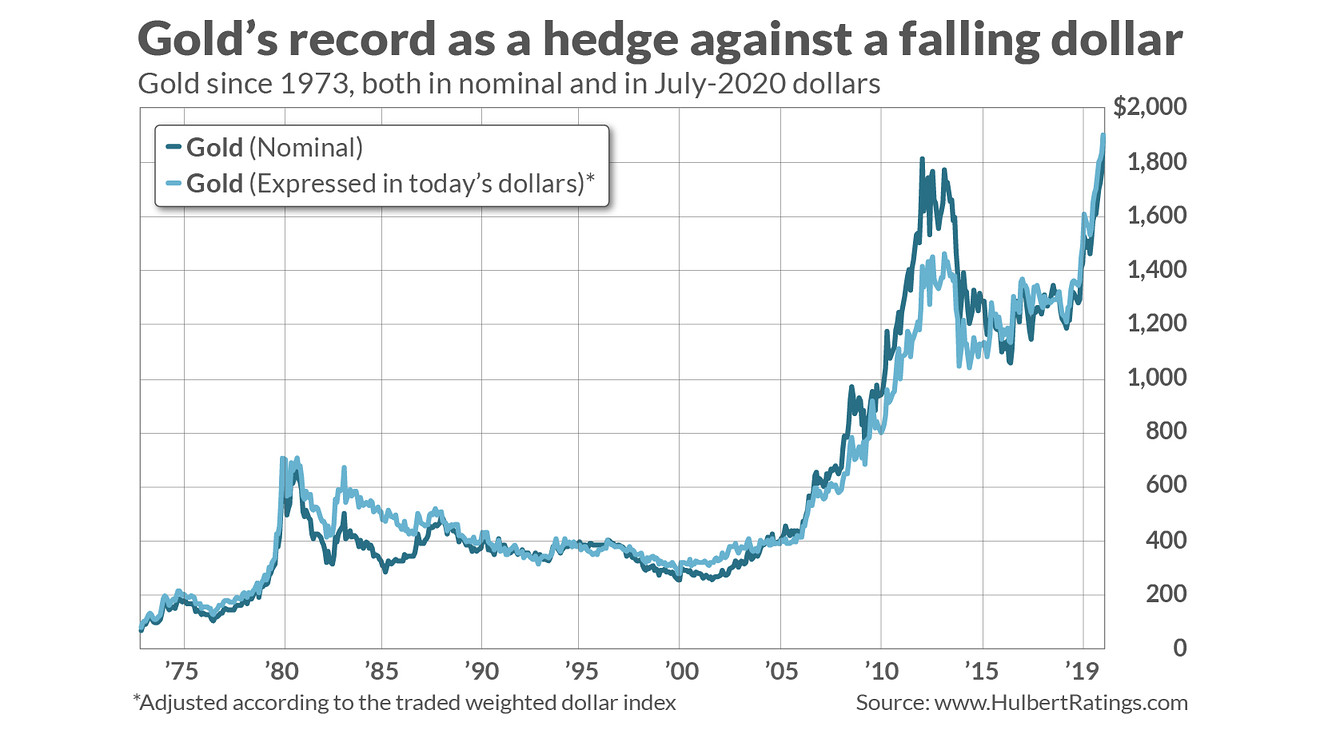 - Build exposure to international stocks when the dollar loses ground -

Don't look for gold to hedge a falling dollar. That may be a surprise since gold is often the first asset that investors think of when wanting to hedge against currency devaluation. Gold's reputation has been strongly reinforced since mid-May, as the U.S. Dollar Index has lost 7% while the price of gold bullion is up 11%.

This recent performance is more the exception than the rule. To put gold's long-term record as a dollar hedge in context, compare it to international stocks. As my MarketWatch colleague William Watts pointed out recently, non-US stocks are attractive to a U.S.-based investor when the dollar is falling, since their dollar-denominated gain will be higher than in their local currency.

Gold isn't even half as good a dollar hedge as international stocks. To show this, I calculated a statistic known as r-squared, which represents the extent to which one data series (in this case, the U.S. dollar index) predicts changes in another (in this case gold or international equities). When focusing on trailing 12 months' returns since 1973, which is when gold first began to trade freely in the U.S., the r-squared for MSCI's Europe, Australasia and the Far East (EAFE) dollar-denominated index is 27%. For dollar-denominated gold it is 12%.

In other words, 88% of gold's monthly gyrations are due to factors other than fluctuations in the U.S. dollar index.

Another way to appreciate gold's disappointing ability to hedge changes in the value of the U.S. dollar is to adjust gold by changes in the U.S. Dollar Index. This is what I did in the chart below, which plots gold's price appreciation since 1973 both in nominal terms and after adjustment. Notice that the two data series are remarkably similar; this is confirmed by the standard deviation of their monthly returns since 1973, which are nearly identical.

This is not the chart you'd see if gold were a good currency hedge since, if that were true, gold would be less volatile after adjusting for changes in the value of the U.S. dollar index.

Another factor impacting gold's short-term gyrations: market timer sentiment, which has failed over the past two weeks to explain gold's strength. As I reported in mid-July, gold timers were then more bullish than at almost any other time since 2000 (which is when my firm began compiling this data). I concluded that this didn't bode well for gold's near-term outlook.

Gold is since up 7% - and the average gold timer is even more bullish. Notwithstanding this two-week failure of contrarian analysis, the even-more-extreme gold timer bullishness suggests that gold's near-term risk is quite high.

Of course, you could conclude from the past few weeks' experience that contrarian analysis has permanently stopped working. I wouldn't bet on that. When I subject the past two decades of gold returns and gold timer bullishness to a number of econometric tests, there's a statistically significant inverse correlation between the two. So you're battling strong statistical headwinds if you bet on gold over the next couple of weeks.