[Acceleration Bands are a technical indicator developed by Price Headley, founder of BigTrends.  This timeless article shows some of Price's main concepts when working with Acceleration Bands in your technical analysis trading, and also specifically details one of the great trades Price had for BigTrends.com using the Bands in 1999/2000.]

Acceleration Bands are one of my favorite indicators to spot the truly biggest trends. Here's more details on how the indicator works.

Price Headley's Acceleration Bands serve as a trading envelope that factor in a stock's typical volatility over standard settings of 20 or 80 bars.  They can be used across any time frame, from intra-day to weekly and monthly timeframes.  We look for breakout indicators outside these bands, while also using the shorter time frames to define likely support and resistance levels at the lower and upper Acceleration Bands.  Acceleration Bands are plotted around a simple moving average as the midpoint, and the upper and lower bands are of equal distance from this midpoint.

The principle of Acceleration is one of the most critical lessons that active traders must learn. Stock traders need to get the best bang for their buck.  They desire to rotate capital to the best performing stocks quickly and then rotate out of those stocks when the acceleration period ends.  The goal is to keep moving your capital into the best-performing stocks.

And option buyers especially need to be in the best trending stocks, as the time lost while holding an option can best be overcome by stocks that move sharply in the anticipated direction.  We want to achieve maximum movement in the stock over the least amount of time possible.

I started my trading career focused on trendlines as a way to buy stocks at important support points and sell stocks at resistance points.  As my trading progressed, I noticed that the biggest winners were often the stocks that broke out and never gave you a chance to buy them back at support.

I've learned that the best profits can come from the parabolic stock moves.  These are the stocks that don't give you easy chances to get into them - what some might call "runaway" situations.

Based on years of research and monitoring the profiles of these stocks, I noticed that these runaway stocks have several factors in common:

1.  They are usually in growth industries, like technology, communications, biotechnology and health care.

2.  Earnings are usually growing at very fast rates, typically 30% or more and many times at 100% or more.

3.  Some amount of media debate about the company's future prospects - the best scenario is to find a stock that is getting attention for being "overvalued" - I often find that the biggest Acceleration Stocks often get more overvalued until the crowd recognizes the stock as a clear winner.

4.  Usually there is a breakout to a new high over the prior 50-bar high - these breakouts have the most longevity in my experience.  Most investors like to buy stocks near their 52-week low and hope it returns to the 52-week high.  Historically, the studies I have done show that over 80% of the leaders for the next 12 months were typically within 15% of their highs when their upside breakouts began.

After studying many different indicators to find where this "breakout point" appeared to reside in most stocks, I developed my Acceleration Bands indicator.  There are several things I can tell you about it here publicly:

1.  Usually I am looking at the last 20 bars on the Acceleration Bands - on a daily chart this incorporates roughly the last month's trading activity, while on a weekly chart this covers 4-1/2 months and a monthly chart just over 1-1/2 years of price action.

2.  The upper and lower Acceleration Bands are plotted equidistant from the simple 20-period simple moving average (the middle blue line in the charts below).  A daily chart shows a 20-day moving average, and a weekly chart plots a 20-week moving average.

3.  Acceleration Bands adjust for a stock's volatility - the more volatile the stock's price action over the last 20 periods, the wider the bands will be around the moving average.

4.  Once I see two consecutive closes above the upper Acceleration Band, I get a buy signal - on trending stocks this will often lead to a major upside Acceleration move - on choppy trading range stocks, this will often be a headfake - I use historical data , other indicators and several entry and exit rules to further narrow down the signals.

Here is an example of how Acceleration Bands work:

Let's look at a weekly chart of S1 Corp (SONE), which was the first to pioneer Internet banking.  Not many traders had heard of this stock when Price started trading it, but it became one of the great trades that helped him launch BigTrends.com as one the pioneers of internet options trading and technical analysis.  Headley's Acceleration Bands indicator showed it had very strong upside potential with limited risk. 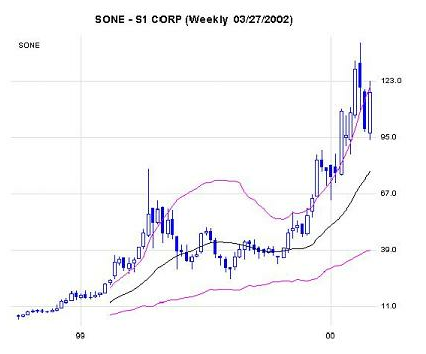 The first Acceleration Buy signal in 1999 occurred on February 19, with the stock trading at 24.19.  The entry the following Monday morning was at 26.38, and the stock managed to surge to as high as 79.25 given news of a 2-for-1 stock split, which proved to be the short-term top in the shares once that news was released on April 14.  The official system exit came on the close below the upper Acceleration Band on May 7 at 47.25, a near-doubler on the stock alone.

The next Acceleration Buy signal for SONE came officially on December 17, 1999 at a price of 84.00.  Due to concerns about the market in late-1999, Headley used his market timing to wait and buy the next retest of the upper Acceleration Band, which he thought would prove to be important support for SONE as it had been in past Acceleration uptrends.  As a result, Headley placed a limit order to buy the stock at 70 or better in early January 2000, which was filled on January 5.  Note that the stock did go below the upper Acceleration Band during the week purchased, trading as low as 65.  But the stock managed to close out the week around 75, back over the upper band.

The close is the point on the chart where you want determine whether to hold the position or exit.  So on a weekly chart, wait until the close at the end of the week, usually on Friday.  This takes more patience during the week than most traders are accustomed to, but it often results in being able to stay with the best trades longer than the rest of the crowd.

SONE went on to run as high as 142.25, another doubler from the entry point, peaking based on a major brokerage firm's new coverage of the stock with a strong buy, with the official exit signal coming on the weekly close below the upper band on February 25, 2000 at 99.13.  Not coincidentally, the Nasdaq topped in early March 2000, and Acceleration Bands did a nice job getting us out of these high fliers before the tech bubble truly burst.