All About the Pullback from SPX 1687

As the table below shows, the current peak-to-trough decline represents a 6.1% pullback from the all-time high and ranks tenth of twenty-one pullbacks during this period.  The mean pullback during this bull market is 7.0% and would suggest a bottom of SPX 1568.  The median pullback is only 5.6% and would have brought the index down to 1593.

This is not to say that there is a specified amount of suffering that the bulls must be subject to before stocks should feel to rebound or that there is a certain amount of time that the bulls should spend in the penalty box (the mean peak-to-trough decline lasts 18 days, while the median is 7 days), but at some point the severity of the pullback will begin to attract more buyers and increase the odds that the tide will turn. 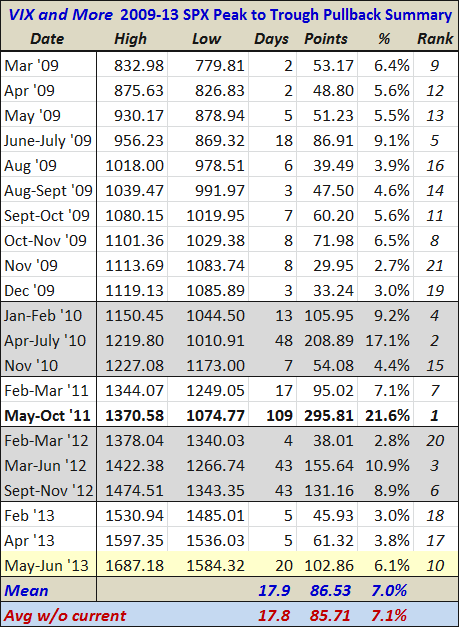 For those who prefer their data crammed into one graphic, I have also updated an annotated plot in which the y-axis captures the magnitude of the peak-to-trough decline (inverted) and the x-axis records the duration of that move.  I have also included the peak CBOE Volatility Index VIX during the pullback as a red label for each dot and a long dotted black line as the best linear fit of all the data points.

Note that the current pullback is already the fifth longest in four plus years and while it has made quite a splash so far, there is only a 3.87 point cushion from today's close to the intraday low before the pullback officially becomes longer in the tooth and more severe. 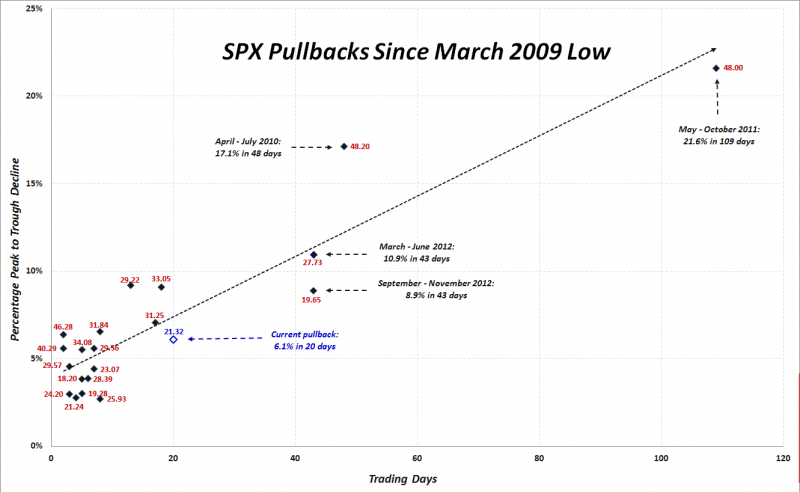 VIX and SPX During the 1994 Interest Rate Hike Cycle

It occurred to me that a reference to the series of interest rate hikes in 1994 probably stretches back before the memory banks of the current generation of investors.  So with all the anxiety about Fed tapering and ultimately ending quantitative easing, I thought this might be a good time to review what happened to stocks and volatility when the Fed embarked upon a series of interest rate hikes that took the financial community by surprise.

To set the context, the 1990s started out with a recession that coincided with the first Gulf War and a corresponding sharp rise in oil prices.  The Fed had been gradually lowering interest rates from 1989 - 1992 and this helped to create an environment that favored a recovery, but this recovery took some time to gain traction and did not get going until 1991.  The stock market fared better than the economy during this period; after a down year in 1990, stocks rallied to post gains in 1991, 1992 and 1993.  After a strong January for stocks, 1994 appeared to be on a similar path to success.

Keep in mind that Alan Greenspan did not believe in signaling the Fed's intentions in those days; on the contrary, he was a master of obfuscation and his cryptic and often ambiguous language typically kept investors in the dark about his intentions.  For this reason, it was difficult for the markets to anticipate the Fed's next move and investors we not necessarily prepared for subsequent interest rate hikes.

How did the financial markets respond to what amounted to almost a doubling of the federal funds rate and an increase of more than 50% in the federal discount rate?  With a lot less volatility than one might imagine. The average closing value of the VIX was 13.93 in 1994, little different than the 13.90 average for the VIX in 2013.  While the VIX did spike all the way up to 28.30 on April 4th, the VIX only closed above 20.00 on two days during the entire year!  The S&P 500 index ended the year with a small loss (a small gain if dividends were to be included in the calculations), but roared back with gains of 34%, 20%, 31%, 27% and 20% in the subsequent five years. 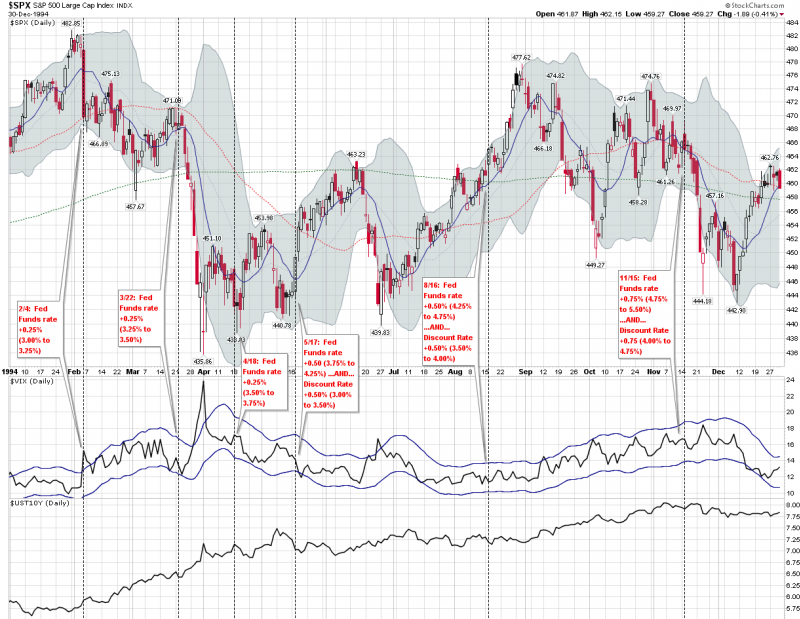 The series of rate hikes did dramatically change the yield curve, as the chart below illustrates. The more dramatic moves were at the front end of the terms structure, with the curve essentially flat from two years through thirty years by the end of 1994. 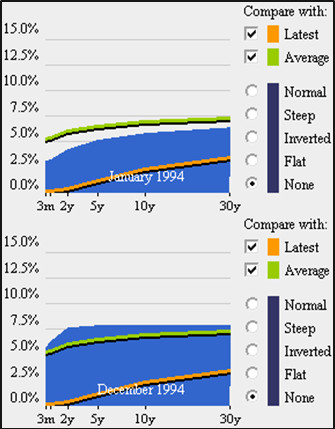 So while the tapering is still playing out ultimately, the historical record from 1994 suggests that tapering fears may be exaggerating how the QE end game will ultimately play out.