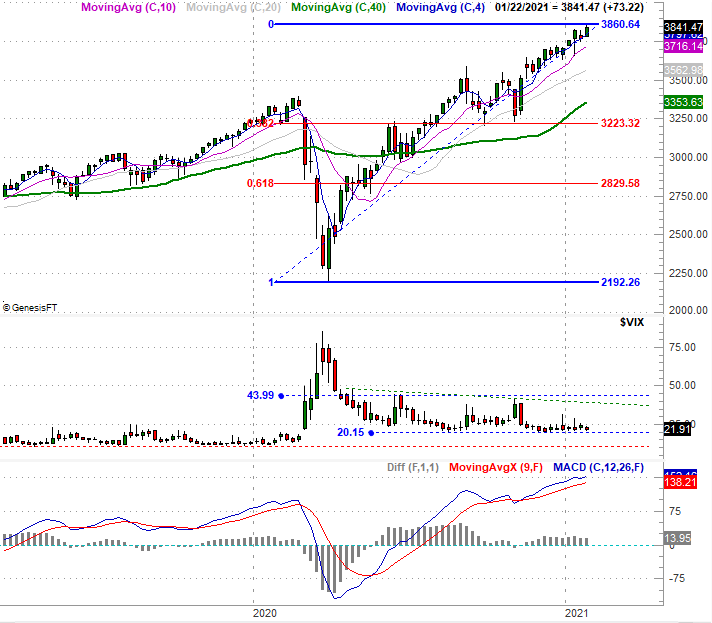 Stocks shrugged off the week-before weakness to hit record highs (again) last week. But, no sooner did stocks reach a new record on Tuesday before petering out on Wednesday. Another round of stimulus checks is probably in the works, and the President's inauguration when off without a hitch. But, that's not new nor surprising. The buyers are running out of fresh reasons to keep buying, which is to say, running out of reasons to keep pushing valuations to more dangerous depths.

From a purely technical perspective though, this shallow rally is proving to be an ideal one.

We'll look at that idea in some detail below, as always. First though, let's recap last week's economic reports and look at what's coming this week. It's gonna be a busy one.

Last week wasn't loaded with economic news, but it was a big one for real estate... and an encouraging one. Housing starts and building permits not only grew (bucking expectations for a lull), but grew in a big way. The 1.709 million permits pace is a multi-year high, while housing starts reached an annualized clip of 1.669 million... another multi-year high. 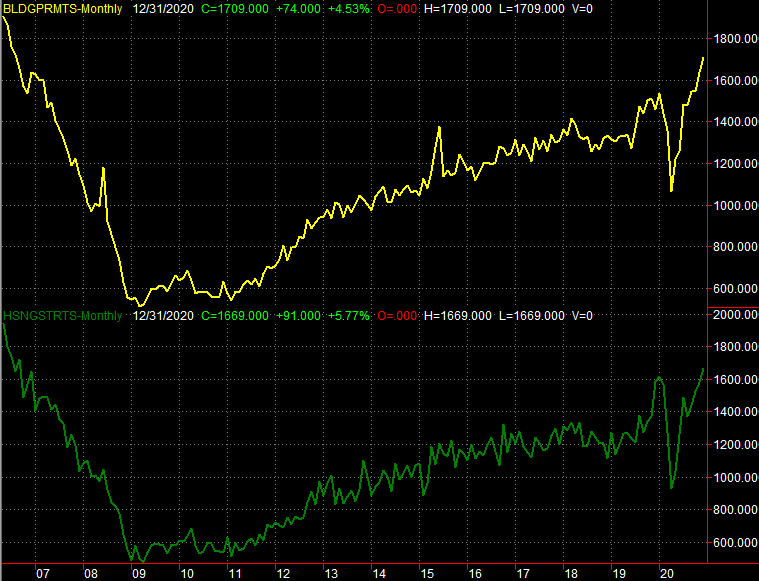 In the same vein (and more on this below), sales of existing homes jumped to a pace of 6.76 million units, defying expectations for a slight lull. 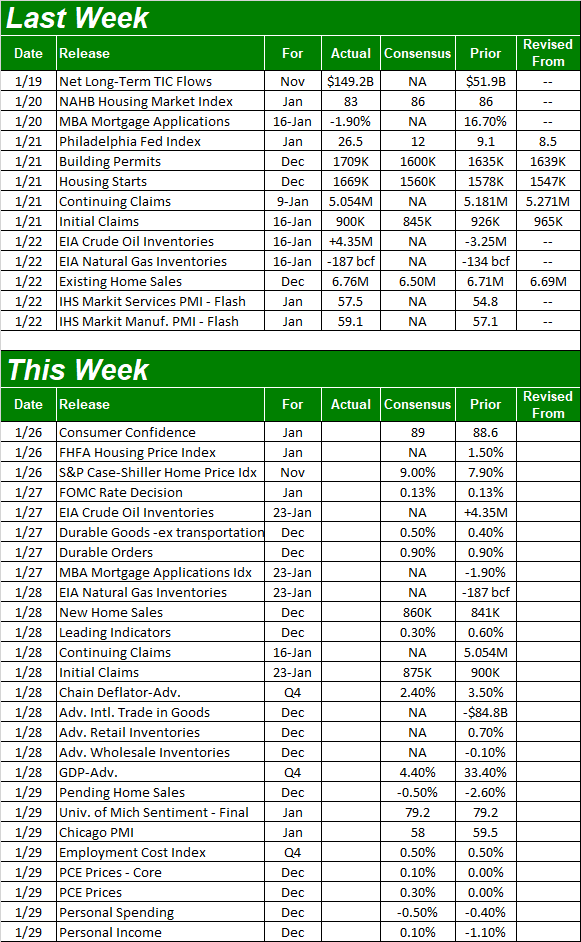 This week is loaded, kicking off with Tuesday's consumer confidence report from the Conference Board. Look for a slight uptick there, although economists are calling a small downtick for the University of Michigan's sentiment index. Both figures remain well below their pre-COVID levels, and neither is exactly making a beeline recovery. 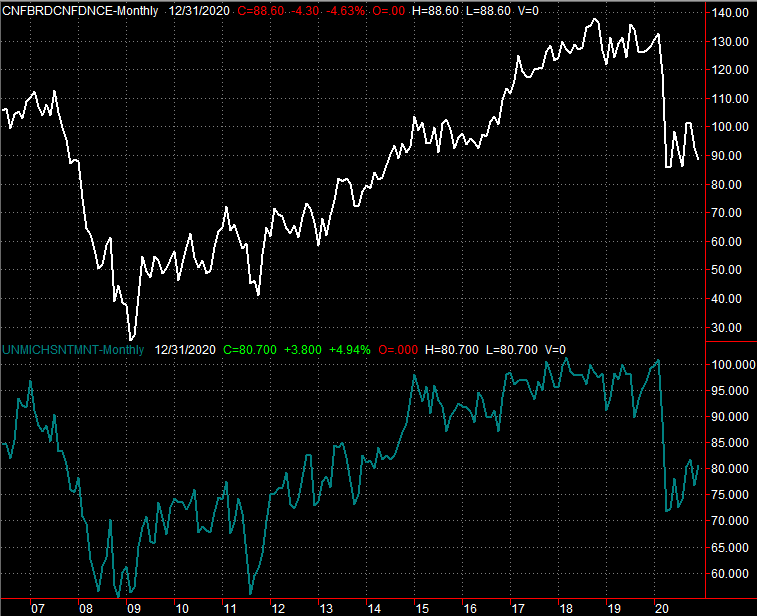 Also on Tuesday look for the Federal Reserve's decision on interest rates, though nobody expects the FOMC to change its mind about its target Fed Funds Rate target of between 0.0% and 0.25%.

What's really in the cards for this week is a rounding out of the real estate picture. That party starts on Tuesday as well with a look home prices. Both the Case-Shiller Index and the FHFA Housing Price Index are projected to keep on rising, jibing with home sales, housing starts, and building permits progress. 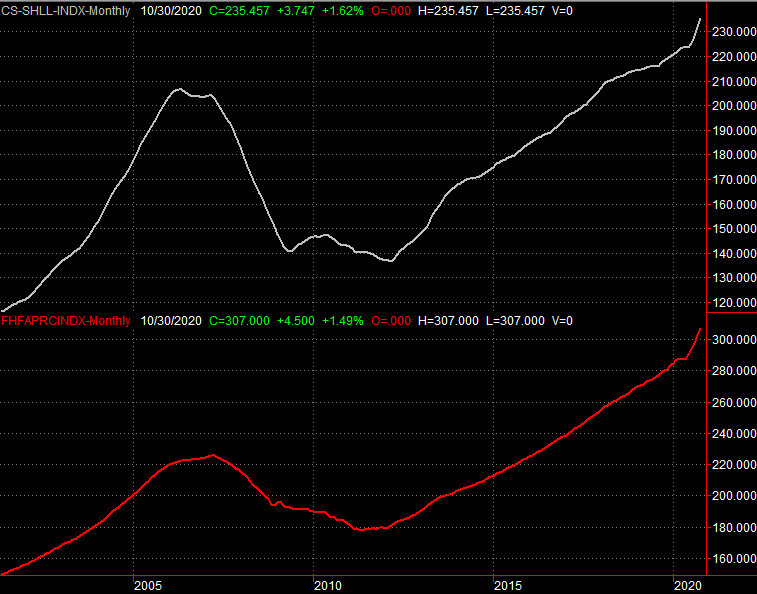 Sales of new homes are also expected to rise, reaching an annual pace of 860,000, up a little from 841,000 a month earlier. That's a reasonable outlook. Last week's existing home sales report indicated a pace of 6.76 million, up just a bit from October's pace of 6.71 million. 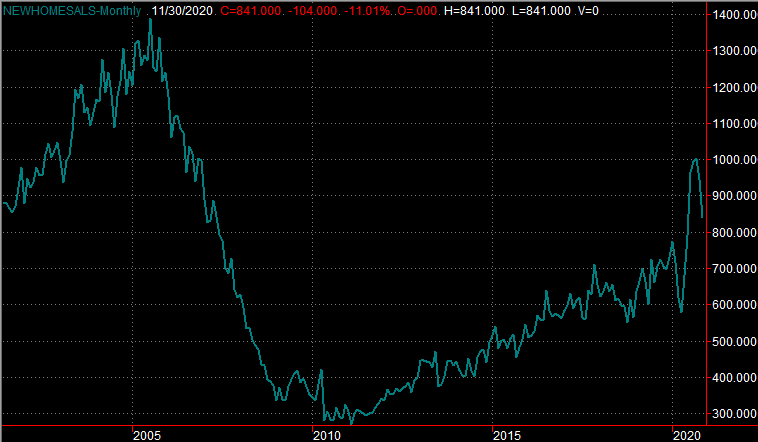 Note that we'll also hear Q4's initial GDP growth rate estimates on Thursday. Economists are calling for a 4.4% improvement from Q3's activity, but we're still in rebound mode from the impact of pandemic lockdowns. Even with Q3's 33.4% improvement, we're still not back to normal. Whatever the case, the market could and likely will react to a beat or shortcoming of Q4's GDP growth outlook.

This week's analysis kicks off with a close-up look at the NASDAQ's weekly chart. The noteworthy nuance is the sheer distance the composite has covered since March's low. We're up 104% from that low in just ten months, which is stunningly unusual... even factoring in the big plunge suffered in February and March of last year. The weekly chart is the only way to really put this advance in perspective. 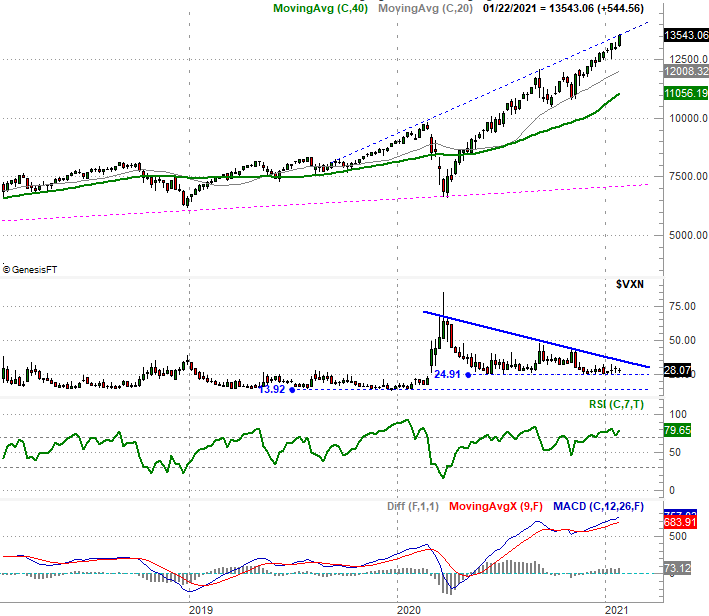 The weekly also gives us a couple of reason to start preparing for a pullback even if it's too soon to act as is one is now here.

One of those red flags is the fact that the RSI line is now well above its overbought threshold at 70, although that's not all that unusual these days. The RSI indicator got and stayed overbought for weeks on end in late 2019 and mid-2020. At worst we saw a little turbulence in those periods, but nothing about those situations was backbreaking (obviously).

That's a scary scenario, but traders aren't overwhelmingly scared yet. The VXN (or the NASDAQ Composite's "fear gauge") remains solid and steady right around 28, which leaves plenty of room for a little more downside before it hits an absolute floor near 14. That's potentially bullish. In fact, until the VXN pokes above its falling technical resistance (the thick solid blue line) currently at 35.2, there's no reason to even think about panicking.

Zooming into a more detailed daily chart of the composite doesn't show us much more, but it does illustrate exactly where the composite's most likely support levels are should a selloff ensue. Those are the moving average lines, starting with the 20-day moving average line (blue) currently at 13,034. That was the floor the NASDAQ pushed up and off of at the beginning of this month. 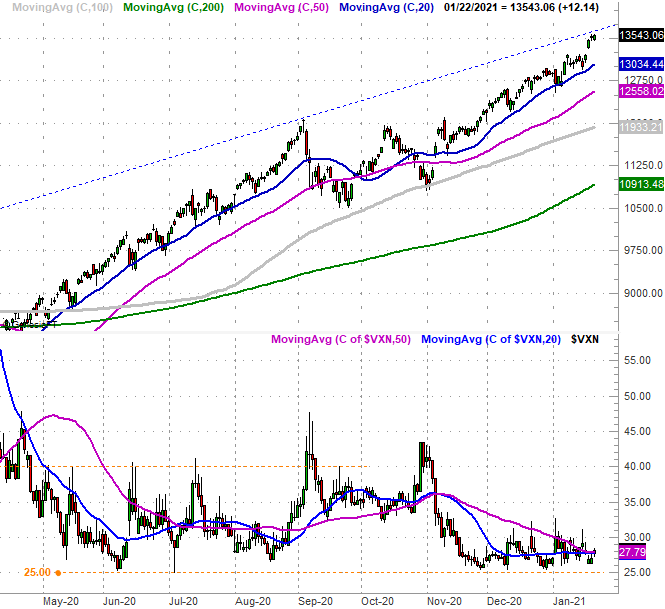 Just for a little better feel for the market's current condition, we'll look at the weekly chart of the S&P 500. It does appear the bullish momentum is weakening, but its bullish momentum nonetheless. The MACD divergence is no longer diverging, but converging. Even without the MACD indicator's subtle clue though, a visual inspection of the S&P 500's chart shows us progress isn't being made quite as quickly as it was just a couple of months ago.

The biggest reason we're reviewing the weekly chart of the S&P 500 is to show you where the updated Fibonacci retracement lines currently lie. Should a pullback start to take shape straightaway, the 38.2% retracement line stands at 3223. That would be a 16.6% correction from last week's peak, which would be a fairly typical bull market correction.

We are going to take a look at a daily chart of the S&P 500, but only to show you something important you wouldn't have seen otherwise. That's the Arms Index, or TRIN Index, for the NYSE compared to the S&P 500. More specifically, we're comparing the S&P 500 to a moving average of the Arms Index.

The Q&D version of why the TRIN's moving average matters: The indicator is a comparison of the market's breadth (advancer versus decliners) to it depth (up volume versus down volume). As long as the two are balanced, the current market trend should remain in place and the TRIN's moving average line should be holding steady somewhere around 1.0. If things start to become imbalanced between breadth and depth though, that often means convictions are changing. That usually corresponds with a change in direction of the Arms Index. As you can see on the bottom half of the chart below, the TRIN Index fell to a multi-month low in November, and even though the S&P 500 itself has continued to rise, the Arms Index has started to rise as well. This isn't what the bulls want to see, as it suggests the volume behind the rally is waning even if breadth, or participation, isn't doing the same. 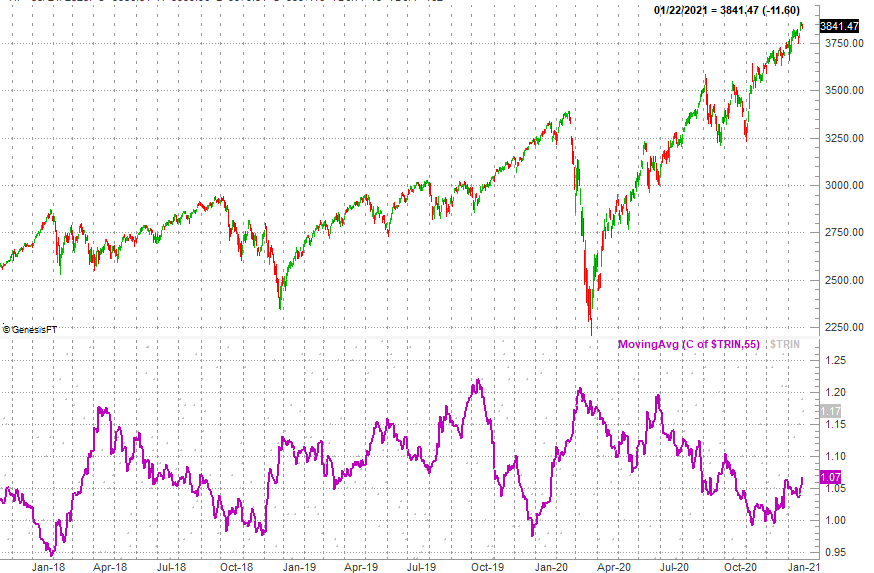 It's too soon to sound the alarm bells based on the Arms Index trend just yet. But, after more than a couple of months of upward traction, it's not too soon to wonder if things aren't exactly as bullish as they seem on the surface. That's especially the case given how overbought the broad market is at this time.