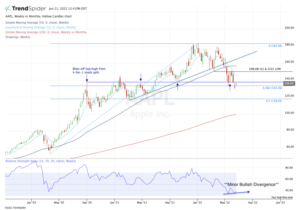 — Apple stock has held up better than all its big peers. But does that make it a buy right now? —

Though Apple  (AAPL) is flirting with losing its $2 trillion valuation mark, it's still the largest-cap company in the U.S.

Until the latest dip in the market, Apple was the only FAANG stock outperforming the Nasdaq. That changed last week after the index made new lows and Alphabet  (GOOGL) (GOOG) did not – it sports a peak-to-trough decline of 32.8%.

It's clear that investors are valuing these companies' strong financials and steady cash flows.

Furthermore, the outperformance vs. the other FAANG components is stark, with Meta (formerly Facebook)  (META), Amazon  (AMZN) and Netflix  (NFLX) down 58.5%, 46% and 75%, respectively.

Microsoft  (MSFT) is the lone megacap tech stock you can include in Apple and Alphabet's company. The software major is currently down 26% from its high and was down 31% at its low.

Withal, the point is clear: If it's a tech stock, it needs a robust balance sheet and cash flow or the stock is likely heading lower. Even high-quality holdings are down 40% to 50% or more.

So in that light, should investors be buying Apple stock? 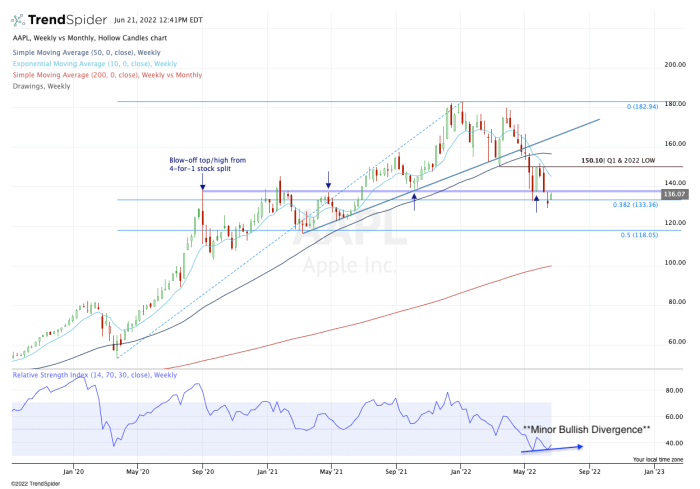 The fear here is simple: The generals fall last.

The commonly used saying on Wall Street refers to the "last stocks standing." In a bear market, everything goes tumbling, including the best names. So while Apple has led the charge for megacap tech, it, too, will eventually succumb to the selling pressure.

The question now is: How much of that has already been accounted for?

Since 2015, Apple stock has had three corrections, ranging between 33% and 39%. So perhaps we're not quite there yet in terms of finding the low.

That said, none of the corrections exceeded 40% and one could argue it's time to begin accumulating now that we've cracked the 30% threshold.

The stock is trading into a key area as we speak. The bulls need Apple stock to find support in the $133 to $138 area zone. The lower end of that range is the 38.2% retracement, while the upper end of that range is where the blow-off top from August 2020 came into play after Apple did a four-for-one stock split.

Once the stock broke out over this major level, it became support. Now, that support level is being drawn into question as Apple hovers just below it in the mid-$130s.

If Apple can regain $138, bulls could see a rebound back to the 10-week moving average, then the key $150 area. This level marked the first-quarter low and a solid layer of support that flipped to resistance in the second quarter.