How Low Can the VIX Go?

How Low Can the VIX Go? 2007 Lows May Be In Reach The market's fear gauge doesn't have a care in the world these days. The CBOE's Volatility Index, or VIX (VXX), recently fell 7.2% to 11.69, falling below 12 for the first time this year.  The last time it hovered around current levels came in 2007. Considering how far the VIX has fallen, all-time lows have now come into sight.  The record sits at 9.31 on Dec. 22, 1993.  More recently, it closed as low as 9.89 on Jan. 24, 2007. The VIX is calculated from the prices investors are willing to pay for options tied to the S&P 500 (SPX) (SPY).  It is often used to hedge stock investments because of the way it tends to rise as stocks fall, and vice versa. A 20-year chart of the VIX shows how far it's tumbled since the worst of the financial crisis in 2008 and the subsequent debt-ceiling debacle in the summer of 2011. VIX Long Term Chart 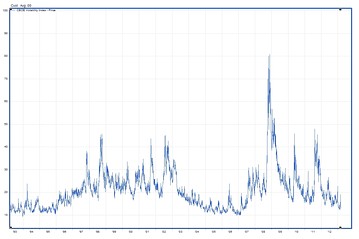 The good ol' fear gauge had a brief spat of volatility at the end 2012 when investors were worried about the fiscal cliff, but that didn't last long.  For much of 2013, the VIX has remained subdued. Monday's move pulled the index's average for the year down to 13.72.  That is about 23% below last year's average, and about 46% below the average of 25.31 over the past five years. For years, Jim Strugger, derivatives strategist at MKM Partners, had been calling for another massive spike in volatility.  But in January, he shifted his thinking, saying he had warmed up to the new reality of a lower-volatility environment and its implications.  He reiterated this point earlier today in a research note: Secular periods of low volatility have historically been beneficial for stocks with consistently positive equity returns - the S&P 500 Index rose 67% of the time on a month/month basis beginning in 1991 and 2003 - punctuated by shorter, shallower pullbacks than those experienced over the past several years.  Yet many investors seem reluctant to embrace this new environment and, even with the recent run-up in U.S. equities toward all-time highs, remain anchored to a risk-on/risk-off paradigm. From a contrarian point of view, Strugger says that hesitance to embrace the rally is actually a reason stocks could still go higher. "This embedded skepticism...suggest to us that equity market momentum could be maintained once any resistance around the S&P's all-time high of 1565 is surmounted," Strugger says. Courtesy of Steven Russolillo, wsj.com