Weekly Market Outlook - Nothing Is As It Should Be 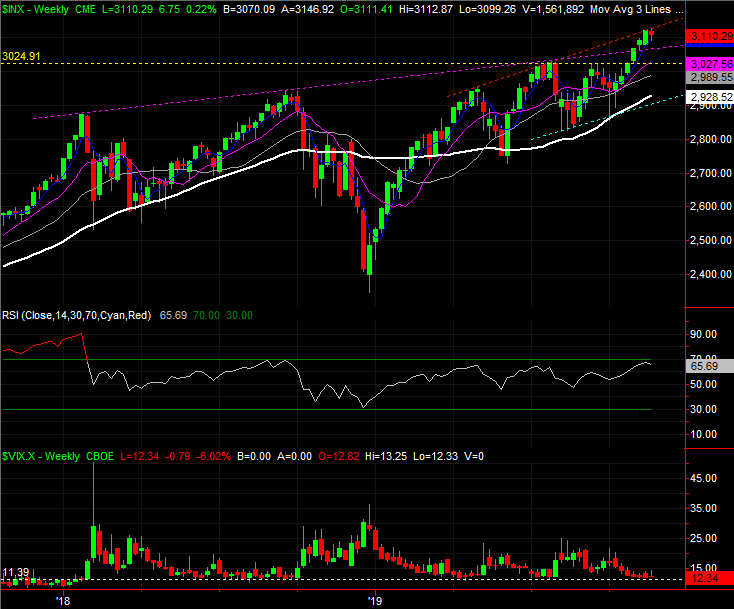 The market managed to start last week on the same bullish foot it ended the prior one on. Hope for an amicable end to the trade turbulence with China spurred new buying. But, between a handful of earnings shortfalls, rekindled doubts about a cooling of the trade war and the sheer weight of the rally seen since early October, the bulls just couldn't keep going. Last week's 0.3% pullback for the S&P 500 marks the first weekly setback in seven weeks.

That hints of more weakness from here, although that doesn't jibe with the calendar. This is a time of year when we're supposed to be making forward progress, but there's not a lot of room for the market to keep marching.

Last week was a fairly busy one, particularly for real estate. Namely, we heard about last month's building permits and housing starts. Both were pleasantly surprising. In fact, the annualized pace of 1.461 million permits is a multi-year high. It wasn't matched by a similar move from housing starts, but that data is trending higher as well... or at least holding up. 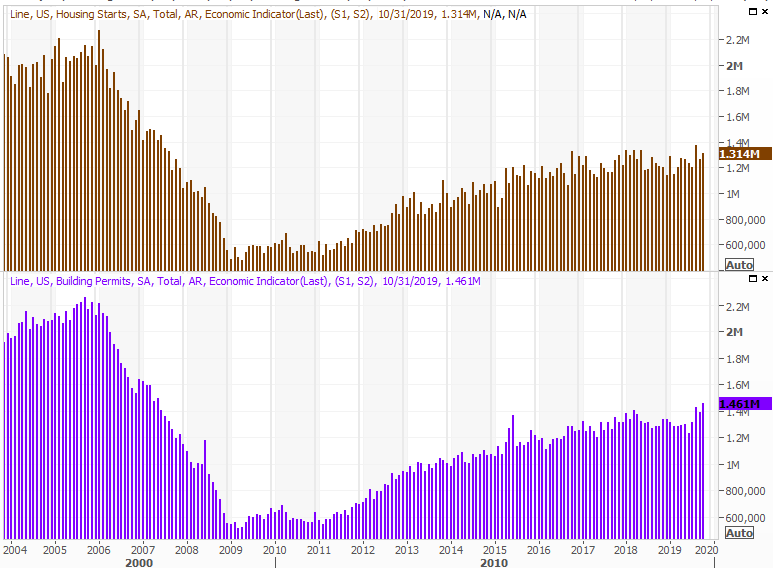 We also got October's existing home sales report last week. Though not quite as firm as expected, the pace of 5.46 million was up from September's reading. That chewed into inventory levels a little more, though they'd been slipping a little anyway. That should help with prices - which had been slumping - but prices had moves to unsustainably high levels anyway. Home prices don't have to keep trending higher for the real estate market to remain firm either. 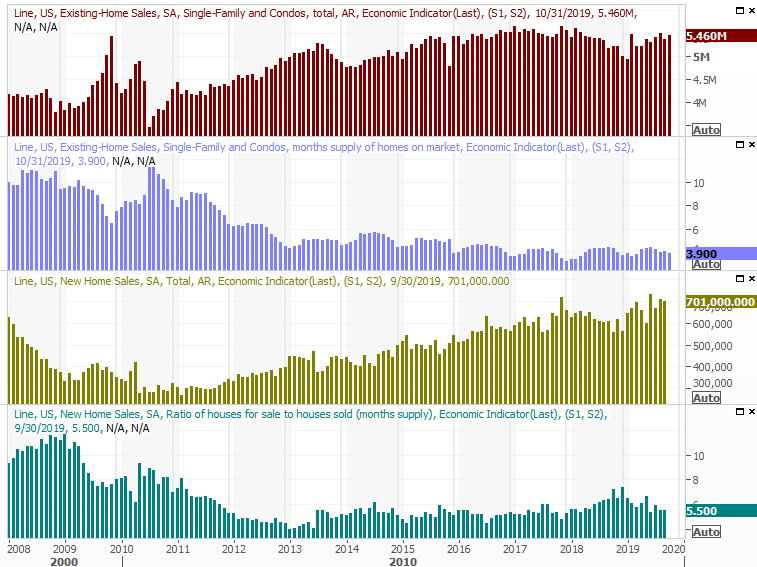 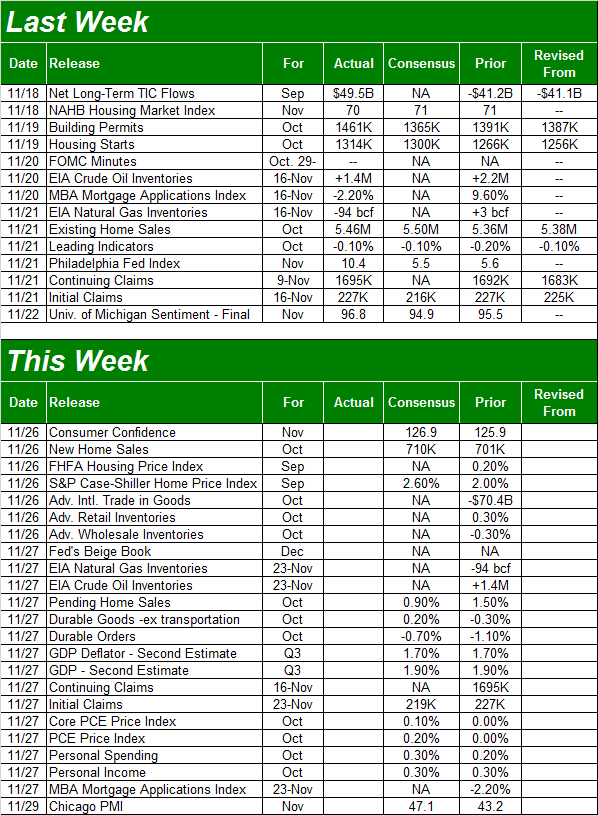 On Tuesday look for another key piece of real estate data... that's the already-discussed pricing data. The FHFA Housing Price Index as well as the S&P Case-Shiller Home Price Index. Both are only for September rather than for October, but the bigger trend should be evident all the same. Prices have stopped rising in earnest, but as long as they don't lose ground that may be enough. 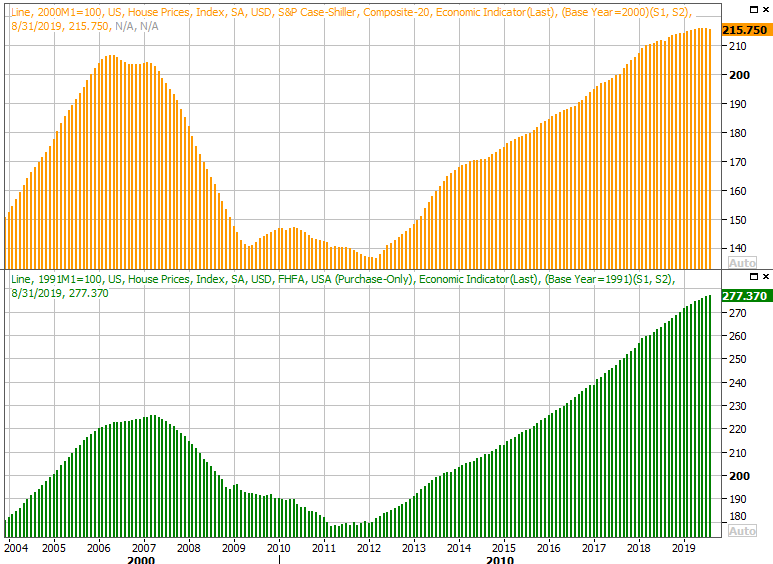 Also on Tuesday we'll get November's consumer confidence reading from the Conference Board, following last week's third and final release of the Michigan Sentiment Index for the current month. It was up, and the Conference Board's measure should be higher as well. That's good, though we'll need to see a little more sustained increase in confidence before reading too much into anything. Consumers may be feeling better, but corporate earnings aren't growing in kind. 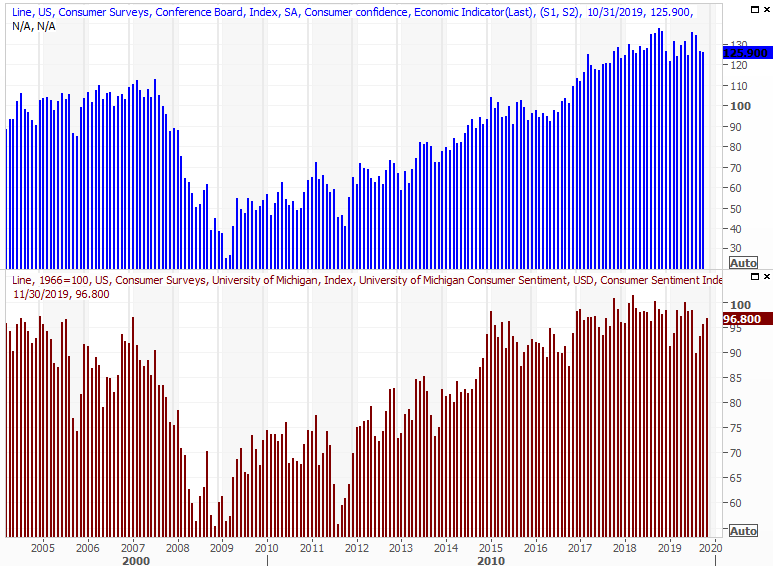 There's more later in the week, wrapped around Thursday's Thanksgiving break. But, nothing all that hard hitting.

It can't be that surprising. A technical ceiling that connected the April and July peaks was bumped into a couple of weeks back, but the S&P 500 was unable to push past that line (red, dashed) in the sand two weeks ago. Last week was no different. That line is clearly going to be a problem, though the sheer scope of the 9.5% gain from the early October low doesn't help the bullish case. 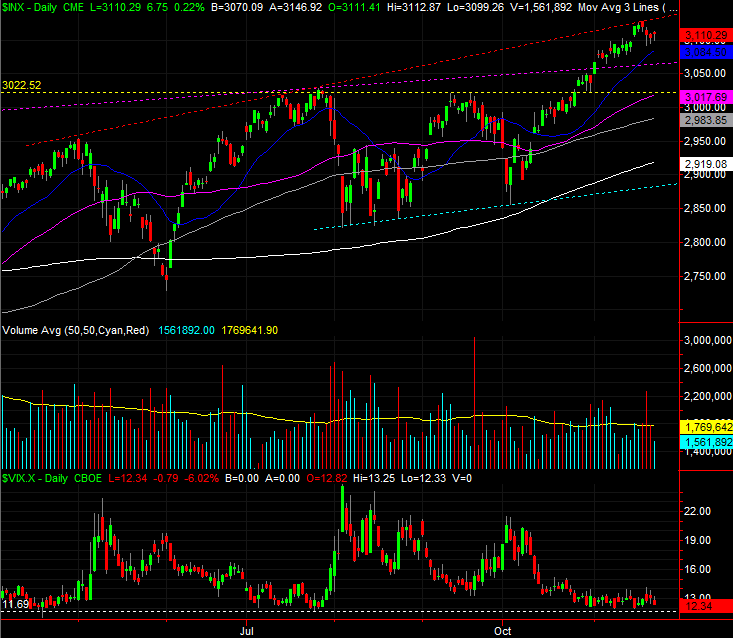 Nevertheless, it's noteworthy that even with last week's loss, the S&P 500 still held up reasonably well as the week wound down. Friday's gain was underscored by a second day of higher lows and a higher high. Also notice the index didn't fall under any of its key moving average lines.

The same basis analysis applies to the NASDAQ Composite. It briefly broker above its key technical ceiling on Monday, but by and large, that's clearly a technical -- and now psychological -- line in the sand. Also notice that while both indices gained ground on Friday, they did so on very little volume. Conversely, the big losses from Wednesday and Thursday were both on higher volume. 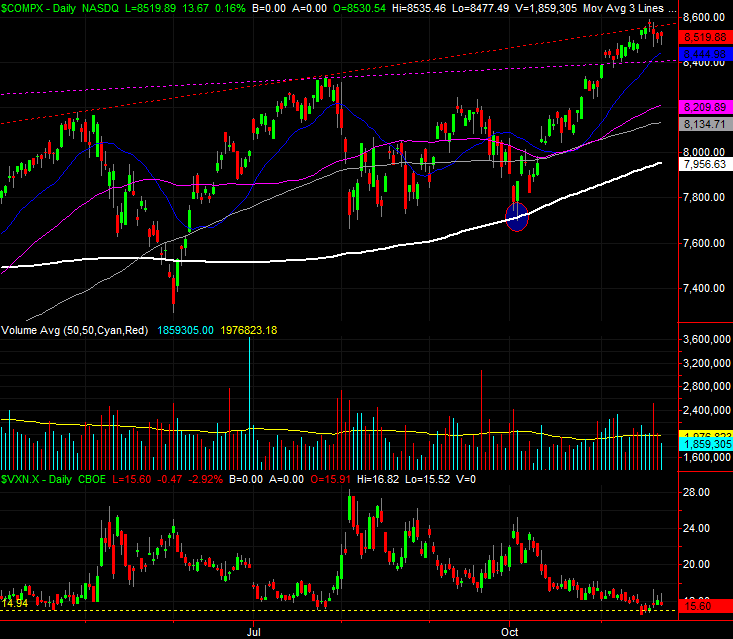 The S&P 500 is way too far ahead for where it should be thus far this year. On average it would be up 4.9% at this point, just starting to rebound from an October lull. We never got the October lull though. In fact, we haven't seen a real lull this year at all. 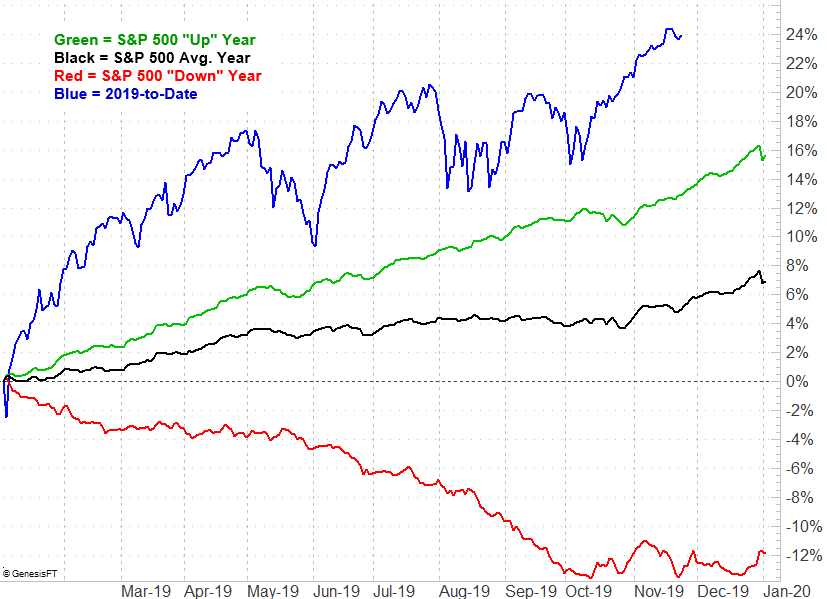 Yes, last year's meltdown has exaggerated this year's rebound. Still, the market is "well ahead of schedule." Even removing losing years, the S&P 500 should only be up 12.7% year-to-date. It's actually up 24.1%.

The performance chart, however, also shows that November and December are reliably bullish months. Even in bearish years, the last quarter of the year is merely choppy, without being bearish.

Even wiping away the impact of 2018's unusual selloff though, and looking at how the S&P 500 fares over the course of the usual four-year Presidential term, the market is overbought. It should be up 14.1% since the end of 2016, or no more than 30.2% for a bullish four-year term. It's up 36.8%, never suffering the usual July-November weakness we'd normally see in the third year. 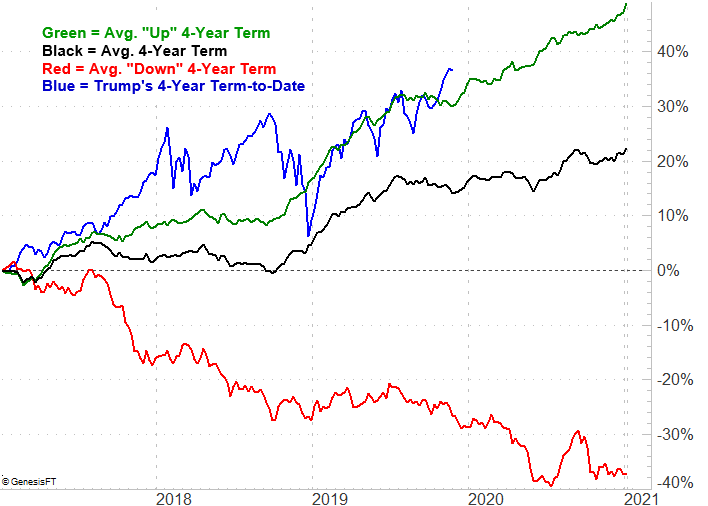 The good news is, the fourth year is usually a pretty good one, presuming we're not in a full-blown bear market. The bad news is, it still feels like we're going to have to pass through a full-blown stumble to clear the path for such a move. (We're also going to need reason for optimism regarding the tariff war.)

Zooming out to a weekly chart of the S&P 500 or the NASDAQ suggests the same thing. Stocks are already technically overbought, with the S&P 500's RSI line just coming off of a multi-month reading that was only matched by the peak from September of 2018, right before a meltdown. You can also see on the weekly chart that the VIX is unable to move below its more absolute floor around 12.0 Never even mind the fact that it's struggling after bumping into the upper boundary of a trading range.

The market should be peeling back here, but it seems pretty intent on delivering a Santa Claus rally. Only a shift in sentiment, sparked by unexpected headlines, will do the trick. Not even mediocre fundamentals appear to nag at investors right now. The first red flag of trouble right here would be the S&P 500 falling below its 20-day moving average line at 3084.5, and even then, it might be smart to see if it rebounds.