After months of clear leadership, the FANG stocks are starting to fail...  some of them anyway.  One of the laggards has found new life while another is on the verge of higher highs following higher lows.  As a group though, these tech-oriented names are hitting a wall.

The performance comparison chart below puts things in perspective.  Netflix (NFLX) and Facebook (FB) have been terrible this week, with the latter in a choppy downtrend since peaking in late August.  Since last March's low, each had outperformed the NASDAQ Composite as well as the NASDAQ 100 indexes.  That's changed dramatically in just the past few weeks.  Apple (AAPL) is also still the leader it was coming out of the post-coronavirus selloff in February and March of last year, reaching a record high late last month. But, even this hot name has taken a tumble over the course of the past month.

Note that with the exception of the Apple, every FANG stock is now trailing the NASDAQ composite index for the past 13 months.  Most of them are on the verge of falling behind the NASDAQ 100 index for the same time frame.

That being said, there are a couple of stock charts of these names we really want to drill into.

Amazon (AMZN) is one of them.  As you can see on the daily chart below, it's been getting squeezed into a narrowing trading range (framed by red dashed lines) since the middle of last year.  That falling resistance and rising support is close to coming to a point within which the stock will no longer have space to move.  Typically, this sort of setup squeezes a stock at of the range and into a more prolong to move.  As it stands now, such a move looks like it would be a bullish one. 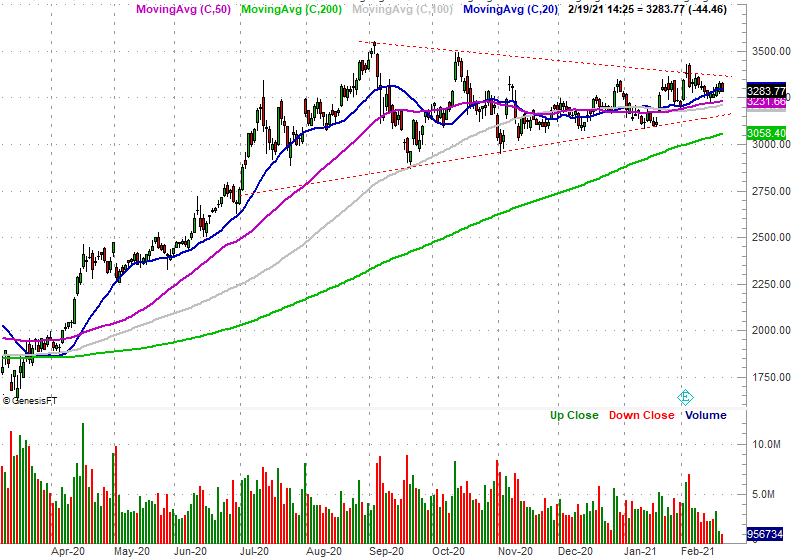 Underscoring this possibility is the fact that the stocks 20-day, 50-day, and 100-day moving average lines (blue, purple, gray) have all converged over the course of the past three months around the $3200 mark.  Inasmuch as stocks move it in and out of periods of high volatility and low volatility, this congestion around $3200 now looks primed to turn into a divergence.

The other name worth looking at here is Facebook, though for a different reason.  The stock is knocking on the door of a substantial technical selloff that's been brewing quietly four weeks.

The make-or-break element with this chart, however, is ultimately a 200-day moving average line plotted in green.  It held up as support in the middle of last month and early this month, that is about to be tested again.  And, that test might be taking shape at a support line extending all the way back to March's low (purple, dashed) around $258.  The floor needs to be broken for any of this to matter, but we're close, and the bigger tide seems to be working against us now.

Despite the sudden decided weakness from the FANG stocks, it's still too soon to suggest they're beyond salvaging, or that this is an omen of unbridled trouble for the broad market. The group has outpaced the NASDAQ (where most of them are listed) and easily outpaced the broader S&P 500 for a while now, so much so we had to expect this sort of selling -- or profit-taking -- sooner than later. The market's back isn't broken yet.

Nevertheless, to the extent the FANG stocks are a leading market barometer, this is a notable shift. We'd just need to see a couple more FANG names break technical floors the way Facebook seems about to before we really worry.

If you'd like to do more with the market's most-watched and most-active stocks, try our FANG Options Trader Advisory Service. It's been built from the ground up to capitalize on the unique characteristics of each of the five FANG stocks. Go here to learn more.