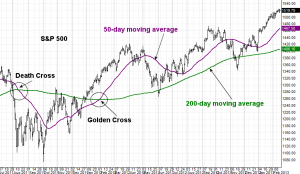 Of all the technical analysis tools available to a trader, moving average lines are the simplest. Yet, that simplicity makes them powerful tools; interpreting them and using them to generate buy and sell signals isn't difficult or subject to interpretation.

A moving average line is simply the average closing price of a stock or index over a set period of days (or a set number of bars, for traders using intraday charts). Each new bar leads to a new calculation of a moving average line's value, and as such, moving averages tend to follow -though lag behind – a stock's or index's trend. The advantage to such a lagging indicator is, however, that it "smoothes out" a chart's volatility to indicate the actual trend, absorbing unusually high or unusually low closes over the specified number of bars used in the calculation.

In the example below, we can see how the 20-day moving average line – the average closing price of the past 20 days – follows the lead of the daily closes of Intel (INTC), and smoothes out fairly erratic day-to-day price action to tell a trader which direction the bigger-picture undertow is flowing. 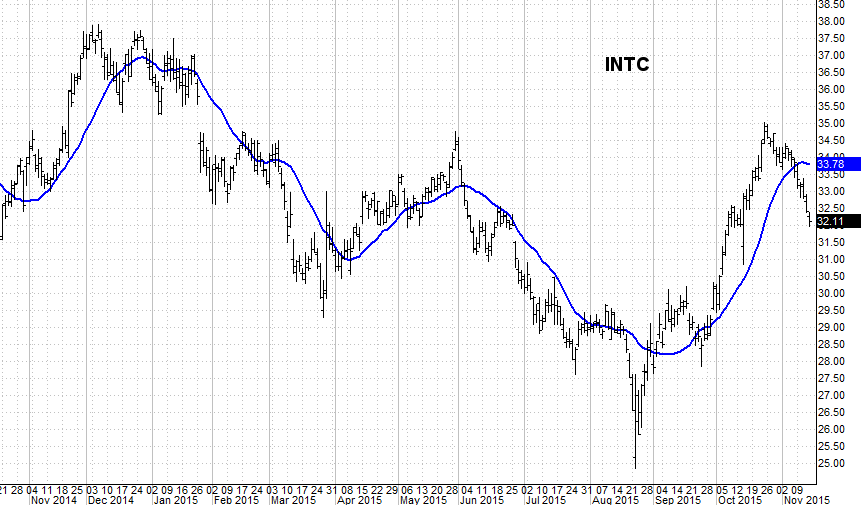 Moving averages can be used in a number of ways, and with a variety of timeframes. Many traders use multiple moving averages, each with a different timeframe, to generate buy and sell signals.

There is no perfect or ideal way to use moving average lines, nor an ideal timeframe used in their calculation. But, for traders using daily charts, the 10-day, 20-day, 50-day, 100-day, and 200-day moving averages tend to be preferred settings…. either each by themselves, or combinations of those lines all applied simultaneously.

Another preferred way to tap into the power of moving averages is interpreting crosses of a faster moving average and a slower moving average as a buy or sell signal. In fact, it's this type of signal that's become such a standard trading tool that traders have developed a nickname for it… a Death Cross, and Golden Cross.

An example of both appears in the chart below… a Death Cross for the S&P 500 (SPX) (SPY), and then a Golden Cross. 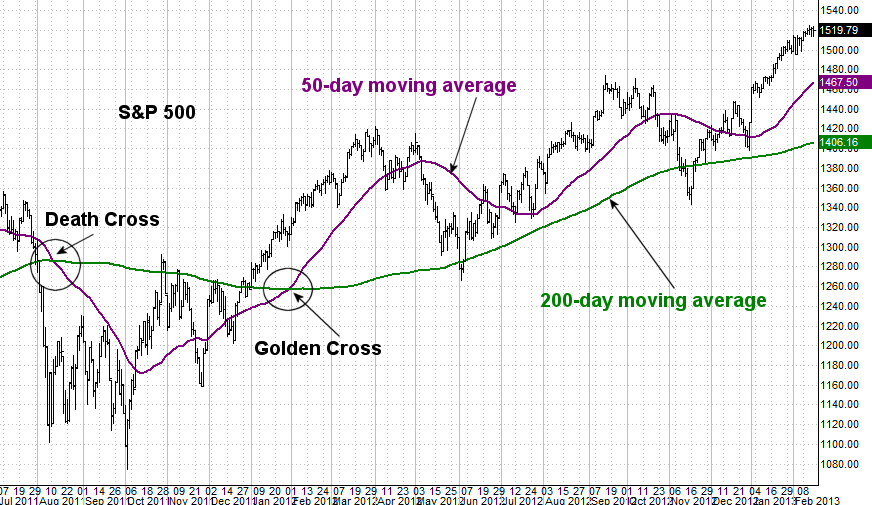 Note that the Golden Cross accurately signaled bullishness was ahead, but the Death Cross didn't technically materialize until the index had already hit bottom and was already recovering. Strangely enough, though traders still tend to watch for these key crossovers of moving average lines as major buy and sell signals, they don't have a great track record as being buy or sell cues.

Broadly speaking, Death Crosses and Golden Crosses tend to be noted for major market indices, but aren't often used as buy or sell cues for stocks (even though they may be better buy and sell signals for stocks).