Midterm Election Fallout: Political Gridlock or Not, the Coming Year Should be Bullish 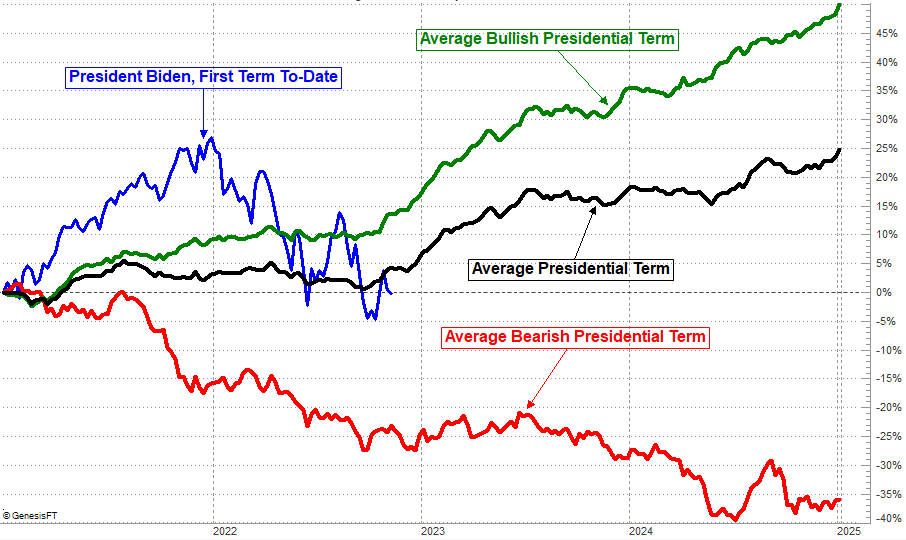 The official counting may not be over for weeks. But, enough ballots have been counted to know our political leaders are pretty evenly distributed among both major parties... ensuring little will get done at least for the last couple of years of President Biden's first term as U.S. President. It's a situation called gridlock.

But, that's not necessarily a bad thing for stocks. It's typically a good thing for the market, in fact, since capitalism continues on without either party in a position to disrupt these efforts.

Better still is the fact, however, that we're beginning the third year of a presidential term with or without gridlock, which for some reason tend to be very good years.

Take a look. Going back to the early 1900's the average third-year gain from the S&P 500 (first as well as second terms) is 11.4%. More than 80% of the time the index logs some sort of a gain in this year, and performs even better when they materialize in the midst of a bull market. Even in bear markets though, the third year of Presidential terms are the least bad of the four, losing only about 4% in the rare instance when a loss is suffered.

Note that President Biden's current term is following the same basic path as the stock market's performance under most other presidents... just more exaggerated. That is, a good start followed by a rough second year that sets up a year-three recovery.

This action actually makes a modest amount of sense. Electioneering takes place over the course of a President's second year on office, casting doubt as to who will be in charge the following year; campaign ads also do a bit of fear mongering. With doubts in mind, voters/investors act accordingly. Once all the campaigning suddenly stops and investors get all the certainty they've been missing for months, they can confidently buy stocks. Corporations feel better about the knows rather than too many unknowns as well.

Is it etched in stone? No. There's always more to the story. Right now, President Biden's term is being dented by rampant inflation that could push the economy into a recession. Even without a recession though, the conflict in Ukraine and what's in essence a trade war with China are factors not typically in play. There's plenty that could still make the coming year an exception to the norm rather than the norm.

If you're playing the odds though, 2023 should be one to net-bullish in. Underscoring this prospect is how most of the indices are still finding strong technical support in all the right places even if they're struggling to get -- and stay -- back in bullish mode. For instance, the NASDAQ Composite is still holding above its 61.8% Fibonacci retracement line at 10,281. As long as that level holds up as a floor, the market's got a fighting chance of having already made its bear market low. Even if not though, a little more downside doesn't necessarily have to lead into a lot more selling.