The Great Depression in Ten Pictures

Lessons From The Past – 10 Charts & Graphs Of The Great Depression

[BigTrends.com:  Patterns and history often repeat themselves to one degree or another.  With the similarities in the stock market charts and economic climate of the post 1929 crash to the 2007-2009 market decline, it’s useful to look at economic and fiscal measures from that time to see how things may unfold this time around and what sort of policies should be undertaken.  Knowing history can improve your trading.]

The 1920s/1930s plunge in the stock market was 90% into its trough.   The initial decline was made much worse by the austerity that Hoover and his Treasury Secretary Mellon pursued. 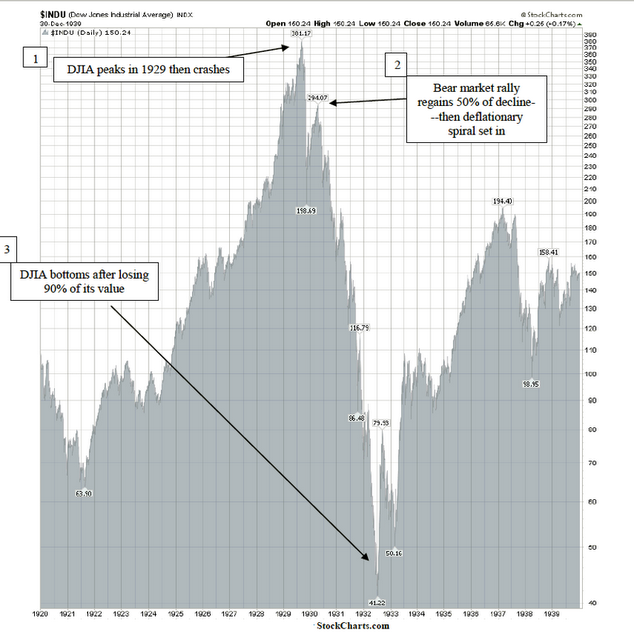 Next is a busy chart but it shows the interplay of several key metrics.  In particular, it shows the disaster that is austerity in response to a financial credit crisis such as we are seeing today. 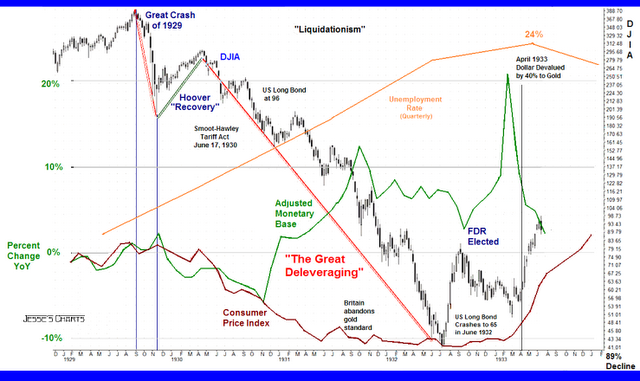 This is the kind of result produced by austerity.  There is a lot of misery in this chart until 1933 when Roosevelt took a more modern approach combining monetary and fiscal actions.  The increase in unemployment in 1938 was a direct result of the premature tightening of the Fed as can be seen on their balance sheet slide a few charts below. 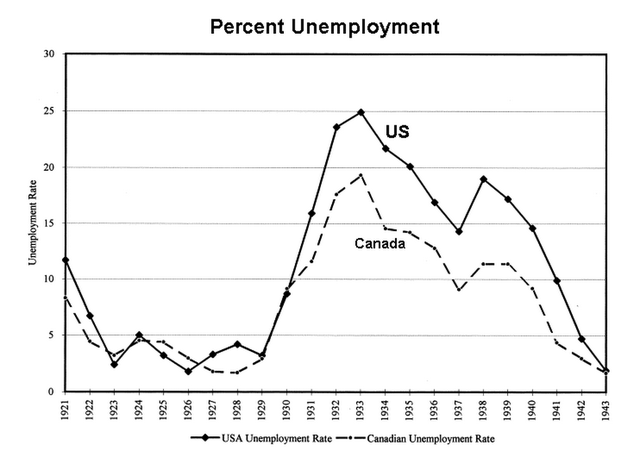 Roosevelt's policies got the American economy back on track.  It was a sound marriage of monetary and fiscal policy.   What made it sustainable was the financial reform, the settling of the banking system, and the emphasis on jobs and growth in the median wage. 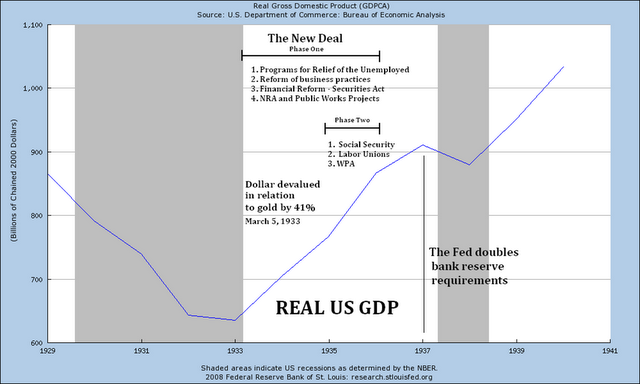 The Fed kept expanding the balance sheet into the 1938 period when they prematurely drained reserves out of a fear of inflation and triggered another recession.  That was a clear policy error and can be seen as clear as a bell on this chart below. 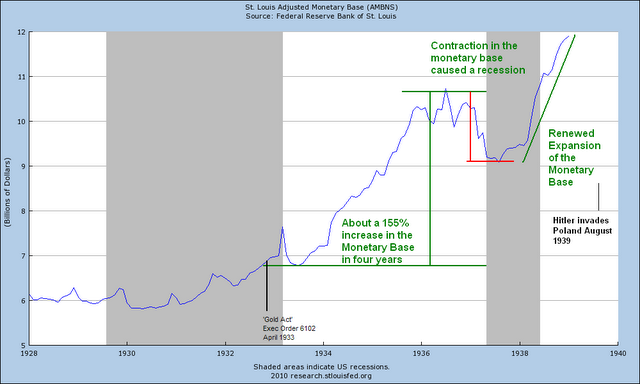 Perhaps this chart is what gave Bernanke the idea for 'Operation Twist.'  If so, he is fighting the last war. 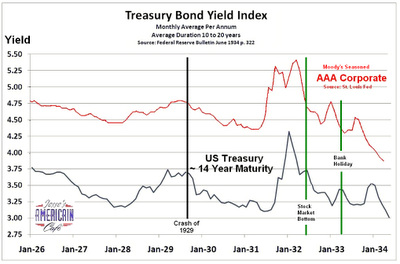 Look at those real interest rates.  No wonder the country almost ground to a standstill.  The Fed and the Hoover Administration, particularly Treasury Secretary Mellon, ought to have been ashamed of this policy error.   The action of Roosevelt in 1933 in breaking the dollar against gold and recapitalizing the banks after shutting down the weak ones, and substantial investigation and reforms, did the trick. 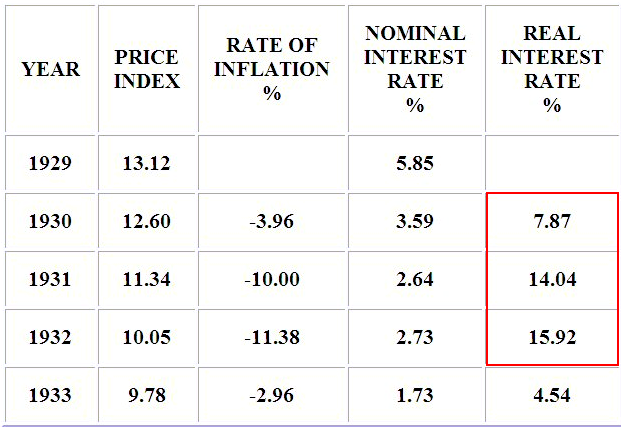 The Smoot-Hawley Tariff was enacted on 17 June 1930.  Exports had already been plunging before that because when demand goes slack in a deep recession both imports and exports tend to drop with demand.  I think some of the rhetoric surrounding the issue of global trade in this case is nonsense.  In the Great Depression tariffs did not matter because no one was really standing as the buyer of last resort.  And if the tariffs went into effect in the middle of 1930, they certainly did not have an untoward impact on imports relative to the plunge in exports, again due to prevailing economic conditions.  Notice that net exports remain largely flat throughout the period.   To state this more precisely, the negative effects of Smoot-Hawley are vastly overstated by globalist advocates. 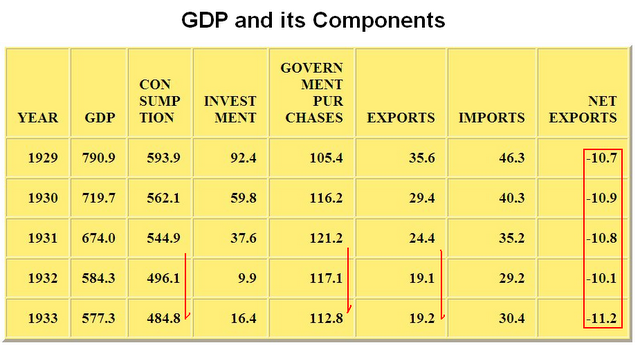 Here is what the real exports and imports figures looked like until 1939.  Again, it is economic recovery and aggregate demand that makes all the difference.   Until tariffs are outsized and predatory, one-sided if you will, they will have much less impact than real economic growth.  And do not overlook the currency devaluation of the dollar to gold in 1933. 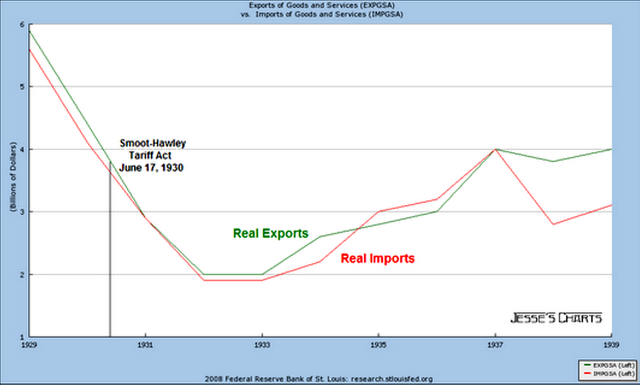 Personal Consumption along with Government Program spending and the currency devaluation were obviously factors to the real recovery in GDP especially since it did not come from net exports.  As can be seen from other slides in this series the dip in GDP in 1938 was due to the Fed's draining reserves by increasing bank reserve requirements out of a misplaced fear of inflation. 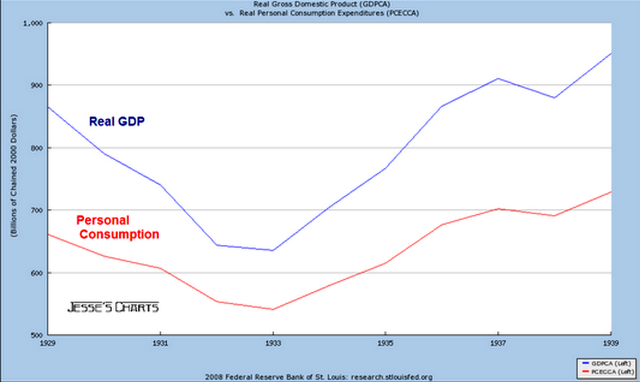